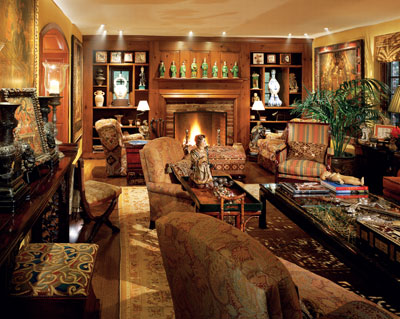 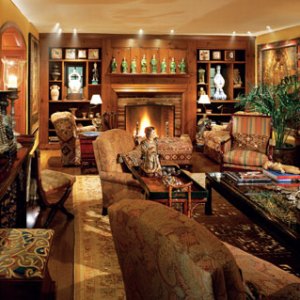 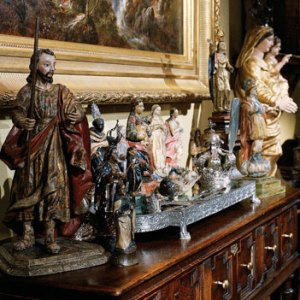 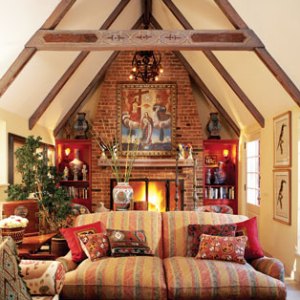 Long before settling into his Norman Revival–style house in Connecticut, the executive of a multinational Fortune 500 company enrolled at a Tokyo university in the early 1960s to study Japanese. While learning the language and gaining knowledge about the Japanese culture, he also began assembling the remarkable collection of art and antiques that his home now showcases. He purchased his first print for a nominal sum at a time when the exchange rate was 360 yen to the dollar. (Today the yen is worth more than three times that amount.) “It wasn’t much,” the executive recalls. “I was a student.” Before his two-year stay in Japan concluded, he would acquire 10 prints that include works by the traditionalist Ando Hiroshige and by contemporary artists such as Kiyoshi Saito. “The art is ascetic and simple,” he says, “very pure.”

When interior designer Jennifer Garrigues accepted the commission to decorate his estate in Connecticut, she knew she would be working with the ideal client. Garrigues, who has studios in New York City and Palm Beach, Fla., often designs interiors to highlight her clients’ art and collectibles. “Sometimes I have to create the collections myself or, shall we say, show [clients] things from the corners of the globe and incorporate them into their houses,” she says. “I like it to look as though they have been around the world.”

In this case, there was no need to create such an illusion. In addition to studying in Japan, her client had been around the world and also had lived in the Philippines, Mexico, Brazil, and Canada. During his travels, he had gathered a wide-ranging collection of artworks, from the aforementioned Japanese prints to 17th- and 18th-century Latin American religious art to contemporary pieces by Andy Warhol and Richard Serra. Among his most coveted treasures is a museum-quality assemblage of primitive art from Australia, the Philippines, and Papua New Guinea. “He already had all the accessories and paintings,” says Garrigues. “We just had to incorporate all these wonderful things and make them work in every room.”

The Connecticut house, the primary residence for the executive and his wife, was designed in 1927 by New York architects Frank J. Forster and R.A. Gallimore. Three wooded acres shelter the weathered-brick, slate-roofed home, which affords a spectacular water view. “You feel as if you’re in the French countryside,” says Garrigues.

While the owner lived in the Philippines, where he briefly resided after leaving Japan (and where he played on a semiprofessional basketball team), he discovered primitive wood carvings from the island of Mindanao, which to him represented the antithesis of Japan’s highly stylized fine art. Among the four carvings that he acquired by trekking to remote villages on Mindanao, his favorite is a wing-shaped portion of a beam that had supported a longhouse until an earthquake destroyed it in 1954. After purchasing the beam from a villager, he sawed off the carved end so that he could bring it back home with him.

In 1964 he accepted a sales position in New York with a multinational corporation, beginning an association that continues today. He then spent a year in Canada and five years in Mexico. Although he says he visited almost every cathedral and ruin on his extensive travels, religious art failed to seduce him until he moved to Brazil in 1972. There the polychromatic carved statues of saints, featuring delicate brushwork, fine details, and gilt edging, enchanted him. “Such a level of craftsmanship will never be repeated and is an art in and of itself,” he explains. He acquired 40 Portuguese and Brazilian statues to add to his growing collection.

During his five-year stay in Brazil, he purchased religious art from throughout Latin America, including paintings from Peru and Ecuador created by indigenous artisans who had been trained by the Spanish or the Portuguese. He unearthed pieces in the most unlikely places, he says, often by walking into a home and identifying artifacts that were “really dirty and in bad condition.”

While visiting Australia in 1979, he expanded the primitive art collection he began in the Philippines with examples of Aboriginal and Papua New Guinean art. In the late 1970s, he returned to New York and began a 15-year relationship with the Whitney Museum of American Art, serving on various committees and, in the process, developing an interest in contemporary prints, particularly those from the 1960s and ’70s. In addition to such famous prints as Warhol’s Marilyns and more than one set of Chairman Mao, he possesses works by Jean-Michel Basquiat, Joan Mitchell, Franz Kline, and Charles Birchfield.

The distinctly American genre of painting known as the Hudson River School perhaps has affected him more than any other. This 19th-century style of landscape painting is famous for its dramatic treatment of light. Over the past 10 years, he has acquired more than 70 works by the most recognized artists in the movement, including Sanford Robinson Gifford and Fitz Hugh Lane. “If I were a painter, I would have been a landscape painter,” he says. “I like the 19th century because the paintings were formulaic, but I also find them beautiful and incredibly calming.”

Ten years ago, before turning his attention to the 19th century, the executive purchased 10 sculpted funerary horses from the Tang period (A.D. 618–907) and an extensive selection of furniture during a trip to China.

Intent on showcasing these items and his entire collection of art and antiques, the executive collaborated closely with Garrigues on the design of the interiors. “While we were putting the house together, he kept bringing out something more wonderful that he had found in Hong Kong or Brazil,” she says.

Instead of selecting the kind of decor found in a minimalist gallery, Garrigues and the client chose a more adventurous approach. They employed a palette of bold, saturated colors: yellow-green in the dining room and coral in the bedroom. “We both love color, and we both love the exotic,” says the designer.

The furniture, most of which Jonas Upholstery in New York custom-made, is oversize and comfortable. Fabrics by Brunschwig & Fils, Lee Jofa, and Sanderson are “on the exotic side because that’s what this art collection is,” explains Garrigues. Oriental and Middle Eastern rugs underscore the theme of exploring faraway lands. “He wanted it to be warm, to be exciting, to be cozy, and yet have an edge to it,” says the designer. “It’s definitely not the norm. He has a brilliant eye.”

Vintage cars—a typically American passion, says the executive—often line the driveway. He began collecting them when he was 16, and now his garage houses a 1967 Corvette, a ’59 Cadillac convertible (which he believes represents the “apex of American car building”), a ’65 Sunbeam Tiger, and five racecars.

The automobiles may come and go, but the art and the antiques remain—and often are rearranged. After all, Garrigues designed the interiors to accommodate her client’s ever-expanding collection. “It’s a typical collector thing,” the executive says. “You don’t worry about what it is. You have to trust your judgment that it’s good. I buy for the thrill of the beauty of the piece. I wouldn’t sell a thing.”