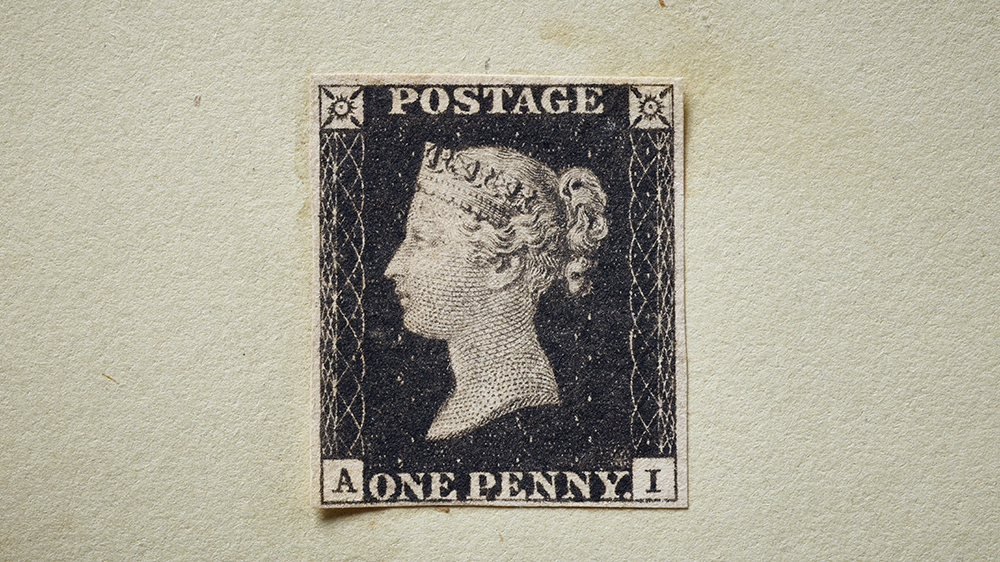 The postage stamp that started it all is going under the gavel.

The coveted 18th-century rarity, known as the Penny Black, was the world’s first postage stamp and represents the very dawn of social communication. Measuring less than 1 square inch, it originally cost a single penny in 1840, but could fetch in excess of $8 million at Sotheby’s Treasures sale on December 7.

Featuring a profile of Queen Victoria, the Penny Black allowed Brits to send a letter weighing up to half an ounce anywhere in the country for a flat rate of just one penny. Prior to that, the recipient had to cover the postage cost. It was a huge success, and, eventually, more than 68 million stamps were sold.

The stamp originally cost a single penny in 1840.  Sotheby's

This particular Penny Black is “the earliest securely dated example of the first postage stamp,” according to Sotheby’s. It is affixed to a document dated April 10, 1840, which comes from the archive of politician Robert Wallace. The Scottish MP led a commission on postal reform and helped bring innovations like the Penny Black to fruition.

Businessman and philatelist Alan Holyoake came into possession of the Wallace Document and the prized Penny Black a decade ago, after which he spent three years determining the authenticity. The stamp is presented in pristine conditions with certificates from both The Royal Philatelic Society and The British Philatelic Association.

It is believed that just two other Penny Black stamps survived from the very first sheet, both of which are on display at the British Postal Museum. As such, the Penny Black is estimated to attract between $5.5 million and $8.25 million (£4 million and £6 million) at the London auction.

Sotheby’s says the Penny Black is the most important piece of philatelic history to exist.  Sotheby's

“This is the first-ever stamp, the precursor to all stamps, and unequivocally the most important piece of philatelic history to exist,” Henry House, head of Sotheby’s Treasures sale, said in a statement. “Though there are many hugely important stamps in collections both public and private around the world, this is the stamp that started the postage system as we know it.”

In addition to the stamp’s incredible (and enduring) legacy, it is also considered to be the lynchpin of philately. No doubt collectors will be more than willing to fork out a few pennies for this Penny Black.