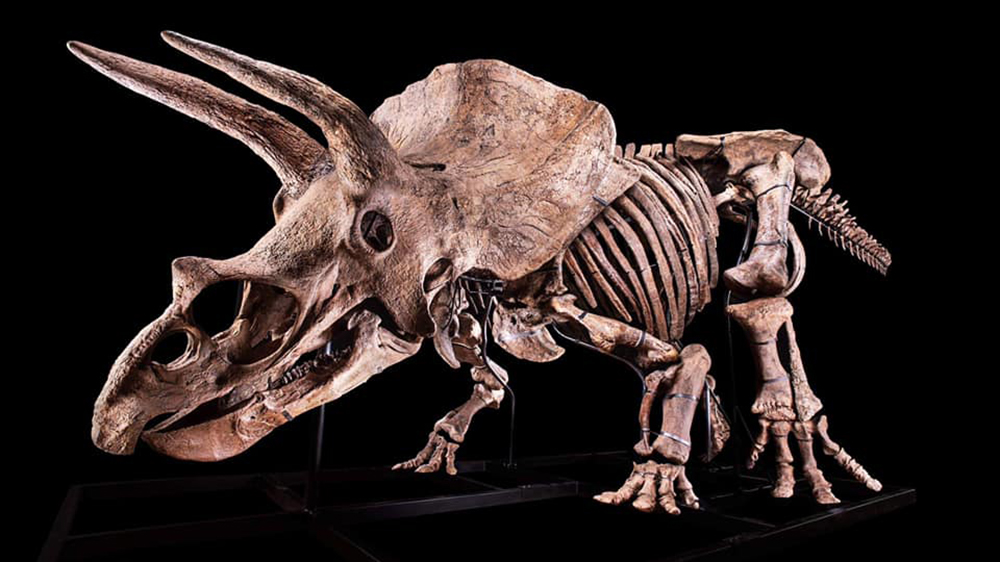 There are things in this world that money can’t buy, but, apparently, a giant dinosaur skeleton isn’t one of them.

A massive 66-million-year-old triceratops fossil, fittingly named Big John, will go under the gavel in France this fall. This isn’t just any old horned dinosaur, either. According to auctioneers Binoche et Giquello, Big John is the world’s largest triceratops and stretches a whopping 26 feet from tip to tail.

The herbivore’s skull alone is impressive. Measuring 8 feet 7 inches long and 6 feet 7 inches wide, it accounts for almost a third of the body and weighs more than 1,500 pounds. The two largest horns, meanwhile, span 3 feet 7 inches long and have a diameter of 11.8 inches at the base. These thick horns were reportedly strong enough to withstand 16 tons of pressure. They also happen give the ancient beast a particularly daunting presence.

Two large horns and 200 other assorted bones have been painstakingly pieced together.  Lewis Joly/AP

Back when Big John roamed the Earth, he lived in Laramidia. This island continent once stretched all the way from present-day Alaska to Mexico. The dinosaur’s life came to an end in an ancient flood plain that was part of the Hell Creek rock formation in South Dakota. That’s where he was eventually discovered by geologist Walter W. Stein in May 2014.

Big John’s bones were excavated the next year, and taken to Italy where they were painstakingly restored. Having been preserved in mud, the 200 or so fossils stayed in surprisingly good condition. Despite being millions of years old, the dinosaur is presented with a 75 percent complete skull and a 60 percent complete body.

Big John is scheduled to hit the block on October 21 in Paris, and is likely to fetch a pretty penny. The sizable skeleton is expected to sell for between $1.4 million (€1.2 million) and $1.7 million (€1.5 million). Don’t be surprised if the winning bid comes in higher than that, though. Last year, Stan, one of the most complete Tyrannosaurus rex skeletons ever excavated, sold for a jaw-dropping $31.8 million and became the most expensive dinosaur of all time in the process.