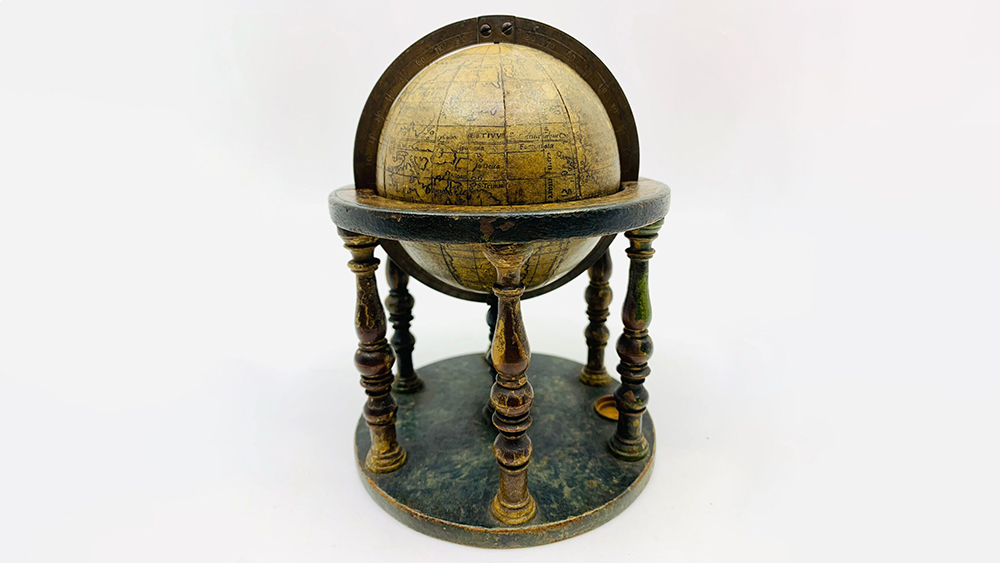 A 16th-century globe showing the world before Europeans ever set foot on Australia sold for $153,861 at Hansons Auctioneers on Thursday.

The artifact—which depicts sea monsters, ships and King Triton (a Greek God of the sea) but omits the South Pacific island continent—measures 3.5 inches in diameter and dates back as far as 1550, making it the oldest globe ever offered at auction. The seller bought the globe for just $198 at the Welsh Antiques Fair. It was expected to fetch between $26,443 and $39,650 at Hansons Christmas Library Auction. Instead it hammered down to private online bidder from New York for the six-figure sum.

According to the UK-based auctioneer, the seller brought the item into its Staffordshire salesroom, Bishton Hall, for a free valuation and was “unsure if the globe was anything of great significance.” However, after an in-depth inspection, Jim Spencer, head of Library Auction at Hansons, found that the globe is made of up 12 special gores, or sectors, of a curved surface. “They were produced as an engraving or woodcut and printed on paper,” Spencer told CNN. “These were then glued onto a sphere, usually wooden, to create a globe.”

According to Spencer, a desktop globe like this is virtually unheard of. “A sheet of gores alone is very rare and valuable, perhaps £10,000 to £20,000, but to see them actually used on a globe, with the furniture—wooden cradle, etc.—is truly remarkable,” he told CNN. In a statement, the company claimed that “many museums couldn’t advise on pricing because they had nothing like it their collections.”  What they were able to discover is that the artifact once belonged to the collection of Major Edward Croft-Murray, a former keeper of prints and drawings at the British Museum.

It’s unknown how Croft-Murray acquired the globe, but it aligns with his affiliation with the Monuments, Fine Arts, and Archives (MFAA) group. The allied unit, also known as the “Monuments Men,” protected cultural assets during World War II. Croft-Murray was appointed advisor to the group in Italy in 1943. “Arguably, it is the sort of important object that could’ve been discovered during the chaos of war,” Spencer said.

The 16th-century globe is not the oldest in the world. That distinction belongs to the Erdapfel from 1492, according to the UK auction house, followed by the Ostrich Egg Globe from 1504, which was sold at the London Map Fair in 2012.