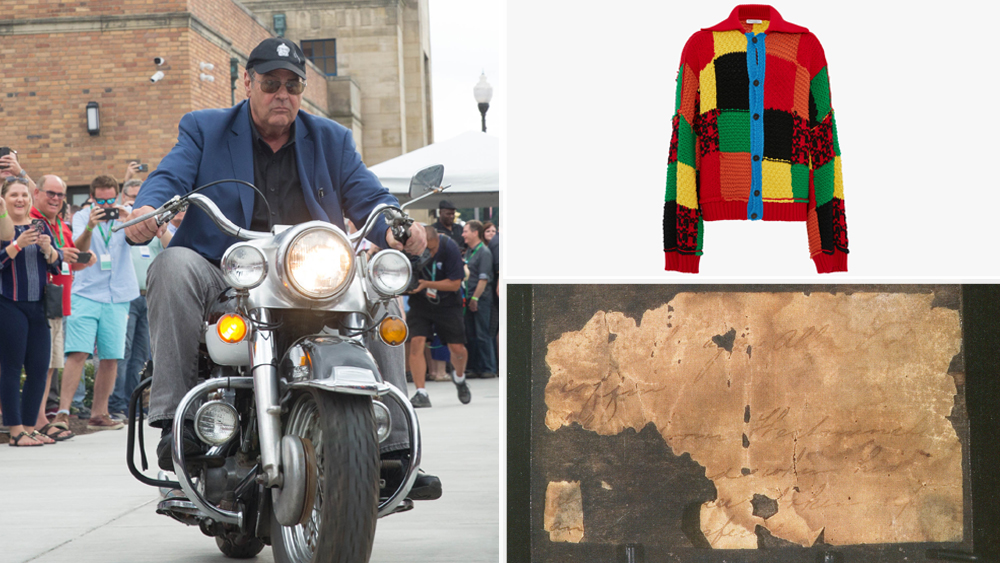 There are many reasons to donate to a museum. Your mission might be to create a legacy or you could just want to ensure the audience for a precious treasure is wider than your immediate family; the tax implications, of course, are especially advantageous, too. Most such bequests are artworks—perhaps sculptures, drawings, paintings or even films. Not all of them, though. Across the world, donors have offered museums a raft of unlikely artifacts they consider important enough to conserve—and somewhat surprisingly, those institutions have agreed.

Take the pair of 1998 leopard print Versace swimming trunks, produced just after Gianni’s untimely death, and held in the Met Museum’s collection. Donor (and former wearer) Tom Belville died in 2006, so there’s no record of how or why he considered his speedos worthy of archiving. The story of some other, unusual holdings, though, is a little easier to track down—albeit, in some cases, rather hard to believe.

Most of these elaborate cakes almost ended up in a dumpster. They were created by Frances Kuyper, nicknamed the Cake Lady; she’s acknowledged as the expert who finessed the technique of using airbrushing to paint on the surface of cakes. Kuyper amassed an enormous haul of cakes over her career, mostly polystyrene-based inedible demos, and created a mini museum in the retirement home in East LA where she moved before her death in 2010. They were held at a local school for a couple years.

“Then the school needed the space after a budget cut, and decided they could no longer support the museum,” explains SoFaB’s founder Liz Williams, “When the pastry students realized what was happening, they tried to rescue the cakes from the dumpster, and took many of them away. They put out a call to find some institution that would give them a home.” She pauses. “It was more of a rescue mission than a legacy.” The collection consists not only of 150 cakes, but also 100 tapes demonstrating techniques from around the world and a 500-strong library of books.

Styles wore a brightly colored patchwork cardigan from designer JW Anderson’s spring 2020 men’s collection while rehearsing on the Today Show—and one devoted fan, unable to afford $1,890 for the original, quickly set about recreating it. LA-based social media influencer Liv Huffman set about learning to crochet during lockdown, and recreated an impressive approximation of the singer’s cardigan that she showcased on TikTok.  Millions of views later, designer Anderson was so impressed by the impact that he uploaded a pattern for the sweater to his website, plus a YouTube tutorial, so that anyone could try to make their own.

The V&A in London, renowned for its fashion archive, acquired one of the originals from Anderson in November, and then the designer extended an offer: If Huffman would donate her homemade version to the museum, too, he would send her the original she’d craved but couldn’t afford—and she agreed. Now, the museum plans to display both Anderson’s design and its social media-sourced replica together in the coming months.

Journey Gunderson, executive director of the National Comedy Center, met Dan Aykroyd for a martini-fueled lunch in Santa Monica in January 2016 to tell the legendary comedian about her soon to open museum. She hoped to persuade him to donate, or support it some way—and suddenly he had an idea: What about the motorbike he used to take to the SNL afterparties, which he’d stored in John Belushi’s basement? She agreed instantly. “That bike symbolizes the wild ride they were all on, experimenting with sketch comedy late at night on television, pushing boundaries, hanging on for dear life as Saturday evening rolled around each week and they had to go on, broadcast nationally whether they were ready or not,” Gunderson tells Robb Report.

The bike itself is a rare bird: a 1971 Harley Davidson police edition, which was later used by the Golden Helmets drill team on a TV stunt show. It was retrieved from storage in Canada, and Aykroyd rode it up to the museum’s front doors through the opening day’s crowds, before dedicating the bike and jumping on stage with a local band to sing Sweet Home Chicago with them, impromptu.

Museum of Broken Relationships in LA and Zagreb, Croatia

This museum started as a prankish project between two Croatian artists, a couple who joked that they should set up a museum to house the items that defined their four-year relationship after it ended. The idea snowballed, and they began sourcing other, offbeat objects from friends with a single remit: anonymously donating the item that embodies a failed relationship alongside a short account explaining the bequest. The first permanent home for the collection opened in Zagreb 11 years ago, and an LA-based satellite was set up in 2016 by wealthy local lawyer John B. Quinn (the latter is currently looking for a new permanent berth, after closing its longtime home in Hollywood).

LA curator Alexis Hyde, asked to single out noteworthy holdings, suggested a pair of silicone breast implants. “I mutilated my body for a man I loved. At the time I loved him more than I loved myself, which I now know is very toxic,” wrote the donor, “I got silicone breast implants which he initially paid for, but then made me pay him back. I had these implants in my body for 5 years. Some of the years with him, and some without. I hated them the entire time.”

Her Zagreb-based counterpart Charlotte Fuentes suggested, among other things, a checkbook, donated by a woman from Denver, Colorado after her 22-year marriage ended. It recorded the highs and lows of their relationship, purchase by purchase, whether college tuition, lawyer and therapy bills and then renting of two different apartments. “It chronicles the financial splintering of our time together,” she wrote. ” For so many years I had to save it; I just couldn’t throw it away. It is like destroying the power engine of a loving relationship.”

It sounds like a plot devised by writer Edgar Allen Poe rather than something that happened to his own corpse. The Gothic writer died in 1849, so poor that he was buried in an unmarked grave. More than two decades later, his reputation cresting, fans raised money to give Poe a true memorial, and arranged for him to be exhumed and moved elsewhere in the cemetery. “As they moved his coffin to a better location across the cemetery, it was so rotten that it fell apart,” says Chris Semtner, curator of the Poe Museum, citing contemporary reports that also marveled at the fine state of the skeleton’s teeth. “When Poe’s bones were being placed into a new box, people grabbed chunks of the old coffin as souvenirs.”

These relics dispersed after his reinterment, but Poe collector Susan Taffe Jane just donated the chunk of that coffin she had acquired to the writer’s namesake museum, after Semtner had contacted her several years earlier requesting to borrow it. The Poe Museum isn’t the only institution with such fragments, either: There’s a chunk at the Enoch Pratt Free Library, and the Baltimore-based Poe Society has a pen which it claims was fashioned from that same wood.