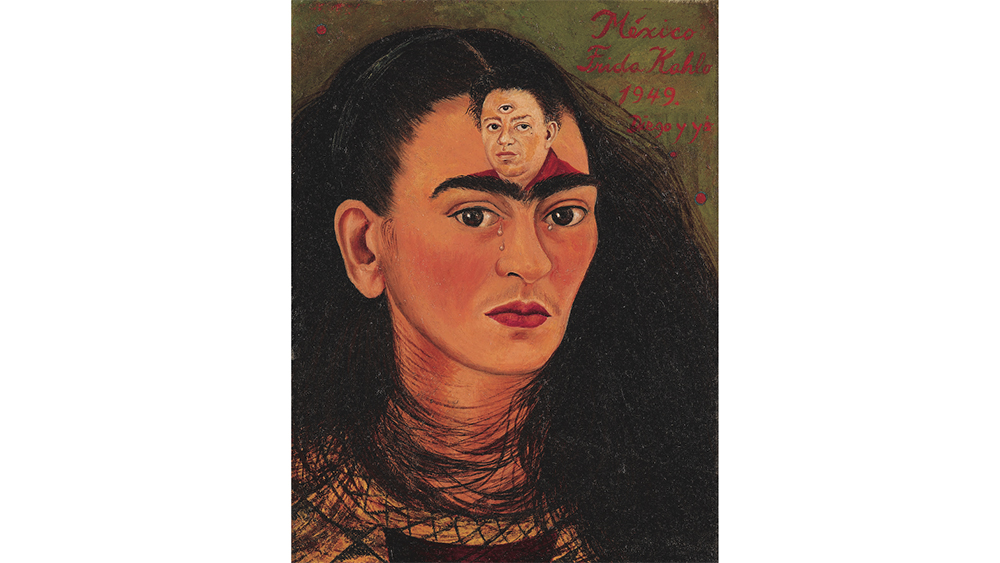 A self-portrait by Frida Kahlo is set to break records at auction this fall. Sotheby’s will offer Kahlo’s Diego y yo (1949) during a modern art evening sale in New York this November. The work is expected to fetch $30 million—more than three times the artist’s current auction milestone of $8 million, notched in 2016.

The soon-to-be-auctioned painting depicts the artist gazing tearfully at the viewer; superimposed on her forehead is an image of her husband, the Mexican painter Diego Rivera, who has a third eye. It comes to market after being held privately for 30 years, and is being sold by a collector in Texas.

The current seller inherited the work from its previous owner, who purchased it in 1990 at Sotheby’s for $1.4 million, against an estimate of $800,000. Prior to that sale, it belonged to Chicago writer and critic Florence Arquin, who was a friend of Rivera and Kahlo.

Describing the work as “emotionally bare and complex,” Sotheby’s chairman Brooke Lampley said in a statement that Diego y yo is “a defining work by one of the few artists whose influence transcends the world of fine art to pop culture and beyond.” Lampley said the sale of the work marks a shift in how the auction house is now approaching its biggest modern art sales. Since 2017, the house has incorporated art from Latin America in its modern and contemporary sales, and in the past year, it has focused efforts to spotlight the work of artists who have been historically undervalued, in particular women and people of color.

Not only is Diego y yo expected to bring a new artist record for Kahlo, surpassing the price paid for her 1939 painting Two Nudes in the Forest (The land itself) at Christie’s in 2016, it is also poised to become the most expensive work by a Latin American artist ever sold at auction. The current record is held by Rivera’s painting The Rivals, which sold at Christie’s for $9.8 million in 2019.

If the present work reaches its $30 million estimate, it will also become one of the most expensive works by a woman ever to be sold at auction. The sale of Georgia O’Keeffe’s floral still life Jimson weed/White flower no. 1 (1932) currently holds the record for the most expensive work by a woman artist ever sold at auction. It went for $44.4 million at Sotheby’s New York in 2014.

Starting on October 7, Diego y yo will go on public display in Hong Kong. After that, it will travel to London before reaching its final location in New York ahead of its sale in November.