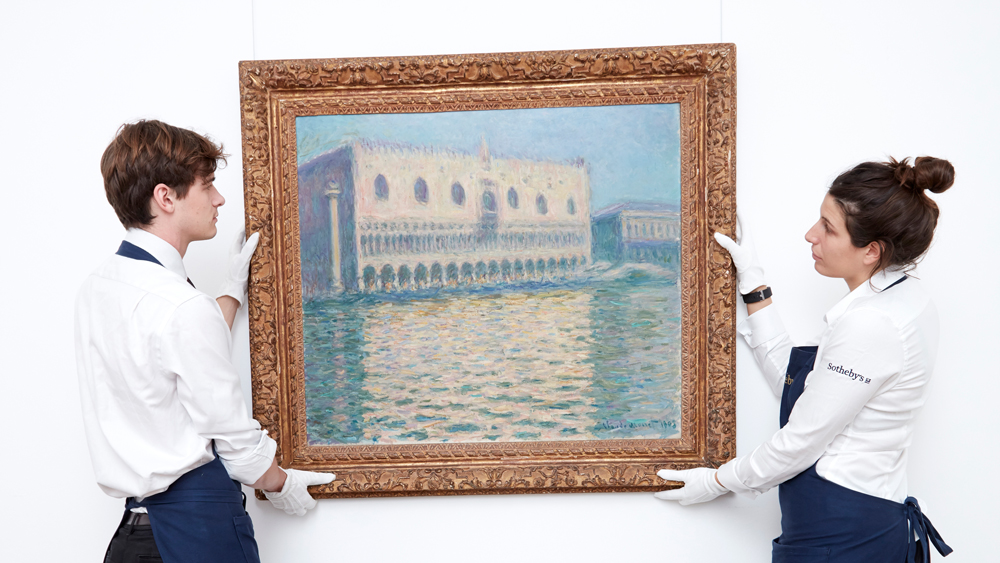 Upon his arrival in Venice in October 1908, the French Impressionist Claude Monet declared the city to be far “too beautiful to paint.” But paint he did, executing some 40 canvases depicting La Serenissima in all of her resplendent glory during his three-month Venetian sojourn. While nearly all of these works have found permanent homes in museums around the globe, Sotheby’s will be offering Monet’s Le Palais Ducal (1908), one of the artist’s few Venetian paintings remaining in private hands in its London sale of Impressionist and Modern Art on February 26.

“This spellbinding painting, which depicts the city’s iconic Doge’s Palace on St. Mark’s Square, is among the finest Monet painted during his one and only encounter with Venice,” says Helena Newman, worldwide head of Impressionist and modern art at Sotheby’s, adding that the fresh-to-market oil on canvas has remained in the same family collection for nearly a century. The painting, she explains, belongs to a celebrated group of three works, which Monet painted from the vantage of a boat moored along the Grand Canal, one of which is held in the collection of the Brooklyn Museum in New York. The painting’s composition is harmoniously divided between a rendering of the palace’s brick exterior, which is softly diffused by light, and the building’s reflection in the waters of the lagoon, which are rendered in dappled brushstrokes. The work, she says, was in so many ways inspired by Monet’s artistic forbears J.M.W. Turner and James Abbott McNeill Whistler, two notable artists for whom the city had held a special importance.

The painting, which carries an estimate of £20 million to £30 million ($25.2 million–$37.8 million), was acquired in 1925 by Erich Goeritz, a Berlin-based textile manufacturer, whose collection included such notable works as Édouard Manet’s Un bar aux Folies-Bergère (1882), now in the Courtauld Insitute of Art in London.