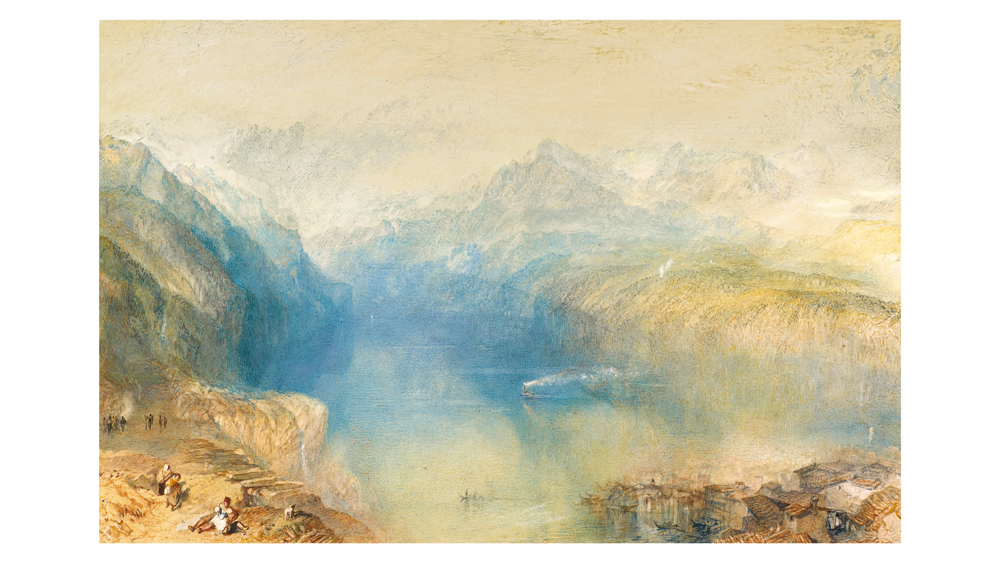 Among the highlights in a sale of Old Master and British Works on Paper at Sotheby’s in London on July 4 is Joseph Mallord William Turner’s stunning watercolor The Lake of Lucerne from Brunnen. “Commissioned in 1842, The Lake of Lucerne from Brunnen is part of a celebrated group of 25 ‘finished’ Swiss landscapes that the artist made during the final decade of his life,” says Mark Griffith-Jones, a specialist in British watercolors, drawings, and portrait miniatures at Sotheby’s, adding that, collectively, these works are widely considered the pinnacle of the artist’s achievements in the medium.

Inspired by Turner’s travels to Switzerland between 1841 and 1844, the watercolor captures what is considered one of the most dramatic landscapes in the Swiss Alps—a view of the picturesque village of Brunnen on the eastern shore of Lake Lucerne along with the magnificent vista of the Bay of Uri. “In this work,” says Griffith-Jones, “Turner has perfectly captured the complex effects of the early-morning light and haze. The huge sky is filled with a golden light which floods the mountain uplands with warmth, while the deep blue waters of the lake rise up in weightless mists, giving the impression that the plunging cliffs and lake melt seamlessly together.”

According to the house, the watercolor—one of the last remaining in private hands—was commissioned by the artist’s great patron, whaling magnate Elhanan Bicknell, as a companion piece to Turner’s iconic Blue Rigi, which realized a record-breaking £5.8 million ($11 million) at Christie’s in London in June 2006. Blue Rigi is now on display at Tate Britain. “Major watercolors from Turner’s late Swiss period are justifiably held in the highest regard,” says Griffith-Jones, “and this is the most important work to appear on the market in more than a decade.”