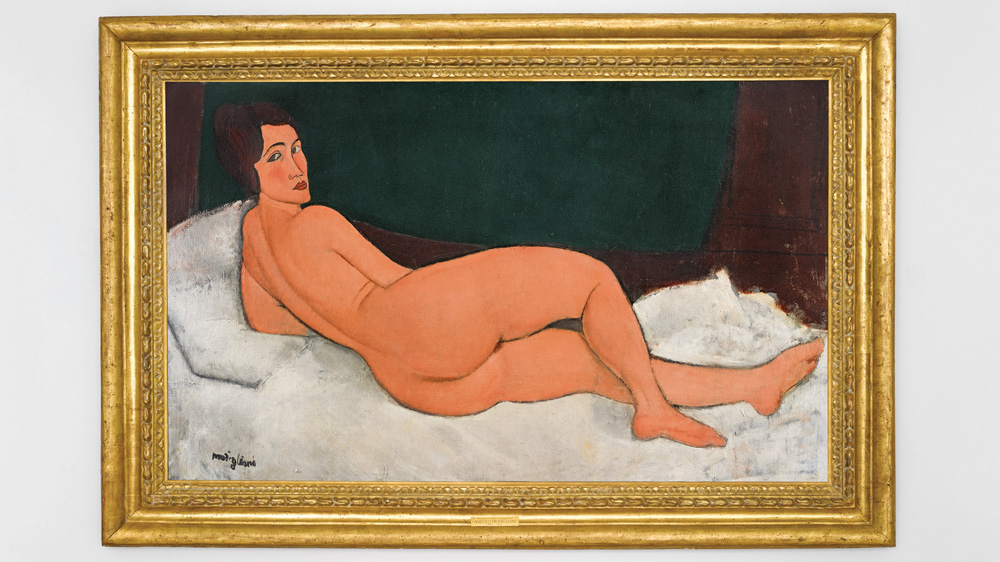 Collectors who may have lost out on the last major work by Amedeo Modigliani to hit the block—his Nu couché (1917–18), which sold for an artist-record $170.4 million at Christie’s New York in November 2015—had a chance to acquire the largest of the canvases from the artist’s famed 22-piece reclining nude series at Sotheby’s New York on Tuesday evening, May 14. The work, which was estimated to achieve more than $150 million, was hammered in by Helena Newman after a mere two minutes of bidding at $139 million, the take home price with premium of $157.2 million just cleared its unpublished estimate.

The 57.75-inch-wide Nu couché (sur le côté gauche) (1917) reportedly hails from the collection of Irish horse breeder John Magnier, who himself had acquired the work for a seemingly paltry $26.9 million in November 2003. At the time, the painting had been consigned by ascendant hotelier and casino mogul Steve Wynn, who had made a number of high-profile art purchases in the late 1990s and early 2000s, including works by Vincent van Gogh and Johannes Vermeer.

The widely exhibited painting, which was on view at Tate Modern in London until the beginning of April of this year, is one of nine remaining in private hands. The others have been acquired by other museums, including the National Gallery of Art in Washington, D.C., and the Solomon R. Guggenheim and the Metropolitan Museum of Art, both in New York City.

“In these paintings, Modigliani has reimagined the nude for the modern era, depicting his models as confident and self-possessed in their sexuality,” says Simon Shaw, worldwide cohead of Impressionist & Modern Art and vice chairman of Sotheby’s Fine Arts division. “Nu couché is a sensual image, the sitter’s gaze meeting that of the viewer in truly mesmerizing fashion.”

When the reclining nudes were first exhibited in Paris in 1917, Shaw explains, the striking and sensual images literally stopped traffic, prompting municipal police to close the show. Today, he says, the series is recognized as one of the seminal achievements in modern painting.

Given that Modigliani’s record-setting work was acquired by Chinese billionaire Liu Yiqian and his wife, Wang Wei, for the Long Museum—a cultural institution established by the power-collecting couple in Shanghai in 2012—it should come as little surprise that Sotheby’s took Nu couché (sur le côté gauche) on a presale tour, unveiling the oil on canvas in Hong Kong in late April in an effort to generate Asian interest.

“Asian collectors have been increasingly active across all our sales of Western art over the past five-plus years, and in our Impressionist & Modern Art sales in particular,” says Shaw.