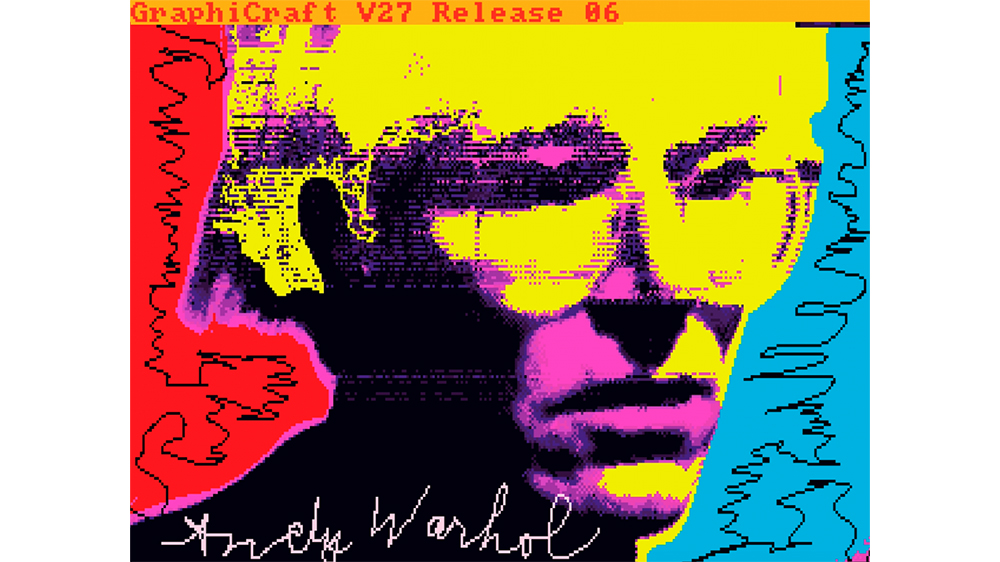 In a bid to attract crypto-wealthy buyers, Christie’s is collaborating with the Andy Warhol Foundation to stage an NFT sale comprising little-known digital artworks from the Pop master’s archive. After the house announced the sale on Wednesday, some experts objected to it, claiming that the works being auctioned were essentially copies.

With bids starting at $10,000, the online sale, titled “Andy Warhol: Machine Made,” features five NFTs. They include signature Warhol motifs, such as his Campbell Soup Cans, flowers, and bananas, and two self-portraits. Scheduled to run through May 27, the sale benefits the Warhol Foundation.

In 1985, Warhol began a stint as a brand ambassador for the electronics manufacturer Commodore International, which gifted him an Amiga 1000 computer. It came equipped with the Propaint software program, which Warhol used to create his digital works. Michael Dayton Hermann, director of licensing, marketing and sales for the Andy Warhol Foundation, said in a statement that the sale represents a “watershed moment in the history of digital art.”

Some of the original works in the upcoming sale were featured in the 2017–19 exhibition “Warhol and the Amiga” at the Andy Warhol Museum in Pittsburgh. The files were discovered when artist Cory Arcangel teamed up with Carnegie Mellon University, the Carnegie Museum of Art, and the Andy Warhol Museum to recover them from the Amiga computer in a three-year-long restoration project initiated in 2014.

Those involved with that project said that Christie’s is misrepresenting the authenticity of the digital versions that are now being sold.

Golan Levin, who heads Carnegie Mellon’s Frank-Ratchye STUDIO for Creative Inquiry lab, which recovered the files from Warhol’s computer, said that the NFTs being sold at Christie’s are far from the originals. In an interview, Levin said that these NFTs derive from images reproduced at a higher resolution and reformatted using modern technology after the restoration, altering them in the process.

In an interview with CNN, Christie’s CEO Guillaume Cerutti said the sale represents for collectors, “the possibility to secure the uniqueness and authenticity of this work on the blockchain.” Levin countered that statement, saying, “Christie’s was blithely saying you’re getting five original artworks. It’s not accurate. You’re getting this kind of proxy or stand-in.”

Levin claimed that his lab reproduced the high-resolution versions at the request of the Warhol Foundation to use as press and print reproductions. Jon Ippolito, a professor of new media at the University of Maine, said this makes them closer to exhibition copies— duplicates of works that can be made for show purposes as stand-ins for an original artifact that may be too fragile to be showcased in a public setting or unavailable in a format conducive for long-term display. “This is not your grandfather’s Warhol sale. It would have been nice to see Christie’s engage with an expert in digital conservation and appraisal.”

The original artifacts recovered from Warhol’s computer, held on a floppy disk owned by the Warhol Museum, were 320 pixels by 200 non-square pixels, bespoke to the Amiga computer system on which it was produced. “This is pixel-accurate,” said Levin of the original file, describing it as “unaltered, unscaled, un-stretched.” The NFTs being sold by Christie’s are 6,000 pixels by 4,000 pixels.

For historians of digital media, something is lost in the upscaling process. Every pixel in the originals was “touched by the hand of Warhol,” Levin said. When they are upscaled, those pixels become warped or distorted.

Christie’s forwarded ARTnews‘s request for comment to a Warhol Foundation spokesperson, who said that the intent behind the sale was “to create NFTs that represent the most groundbreaking works from the artist’s experimentation with the Amiga 1000. The artworks created in 1985 were digitally restored using 21st-century technology. Not unlike physical artworks that undergo careful conservation, the works Warhol created have been carefully preserved for posterity.”

In a joint statement, Hermann and Christie’s postwar and contemporary art specialist Noah Davis said, “This is a moment and an opportunity that truly brings together two previously distinct collecting communities—the traditional and the digital.” Levin counters this, saying a sale of the original work would have been a defining moment in the digital art sphere.