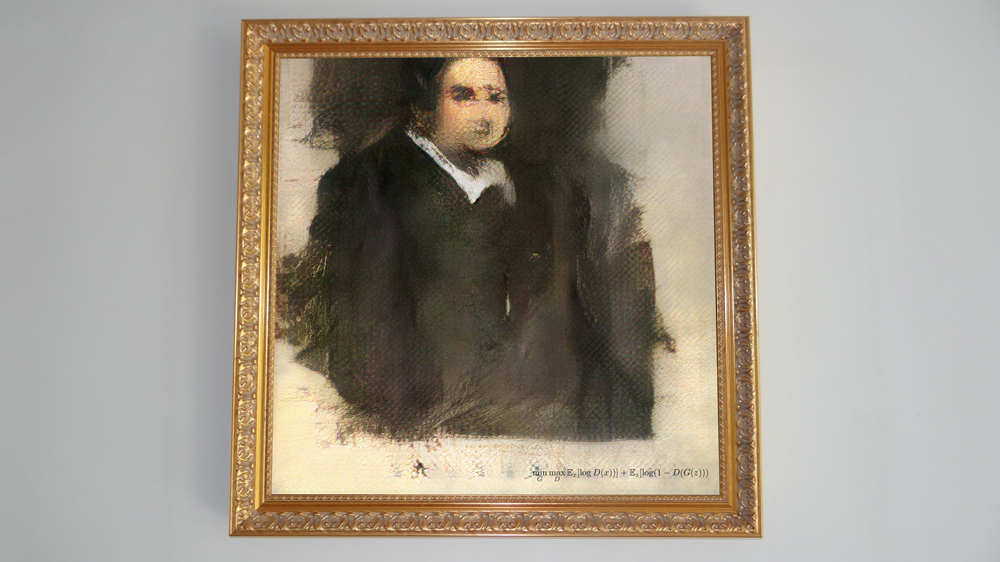 In a novel move, Christie’s is offering Portrait of Edmond de Belamy (2018), the first work of art to hit the auction block that was generated not by an artist of the likes of Leonardo but by an algorithm—a computer program—in its sale of Prints & Multiples on October 25.

The portrait, one of a series of eleven unique images of members of the fictitious Belamy family, was published by Hugo Caselles-Dupré, Pierre Fautrel, and Gauthier Vernier of the Paris-based collective Obvious Art. In recent years, the inquisitive trio has been exploring the interface between art and artificial intelligence, going so far as to pioneer a method for creating artworks that goes by the acronym GAN, which stands for “generative adversarial network.”

As Caselles-Dupré explains it, “the algorithm is composed of two parts. On one side is what we call the ‘Generator’ and on the other side is the ‘Discriminator.’” They feed the system a data set of 15,000 portraits painted between the 14th and 20th centuries. Using that data, the Generator creates an image based on the similarities it finds in the data set. After that, the Discriminator attempts to spot the difference between a human-made image and one created by the Generator.

Says Caselles-Dupré, “One might liken the two parts of the algorithm to an artist and critic. The aim is to fool the Discriminator into thinking that the new images are real-life portraits. The portraits created are simply the result.”

In looking at the portrait, it is clear that while the algorithm was able to parse details of discernable clothing, it ran into a bit of difficulty when it came to depicting the curves and complexities of the human face. It is precisely for this reason, says Caselles-Dupré, that the collective chose portraiture as its test case.

Portrait of Edmond de Belamy, which carries an estimate of $7,000 to $10,000, will appear as the last lot (Lot #363) in the Prints and Multiples sale at the house in New York on October 25. The auction coincides with the Fine Art Print Fair, the 27th edition of which runs October 25 through 28 at the Javits Center in Manhattan.

Article Update: After a bidding war that lasted nearly 7 minutes—in which five bidders vied for the portrait—it sold to a telephone bidder for an astounding $432,500, more than 40 times its $10,000 high estimate. In the wake of the sale, Obvious Collective issued a statement to Robb Report: “We would like to thank the A.I. community, especially to those who have been pioneering the use of this new technology. It is an exciting moment and our hope is that the spotlight on this sale will bring forward the amazing work that our predecessors and colleagues have been producing. We are grateful to Christie’s for opening up this dialogue in the art community and honored to have been a part of this global conversation about the impact of this new technology in the creation of art.”