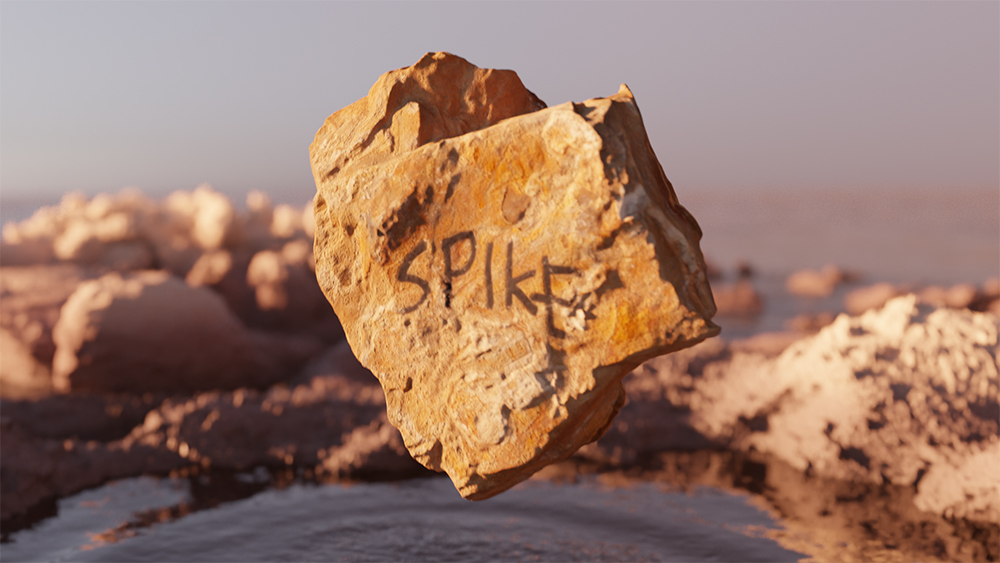 In 2005, Banksy acquired a piece of Israel’s West Bank Barrier and used it for a “treasure hunt.” The first person to find the rock and email him with the secret word he wrote on it—”Spike”—would get to keep the work.

The piece, titled Spike, was found in Palestine and has since traded hands a few times. Now, it is heading to auction—not as a physical object but as an NFT.

Valuart, a new NFT platform, launched with the auction of Spike on July 22. Bidding will continue until July 30 online. Notably, the elusive street artist is not involved in the minting or sale of the work. Instead, the Italian opera singer Vittorio Grigolo, who owns Spike and cofounded Valuart, was the one who worked with the platform to create the NFT.

The NFT features a CGI rendering of Spike slowly spinning in the long light of a sunset. It appears to twirl over mountains and water as Grigolo sings the Puccini aria “E lucevan le stelle.” The buyer of the NFT will also receive certain extra perks, including a trip for the buyer and guest to see the physical Spike in Switzerland, as well as a dinner with Grigolo and his other Valuart cofounders, Etan Genini and Michele Fiscalini.

At time of publication, the highest bid was 1.5 Ethereum, or around $3,500—a disappointing start for an NFT related to work by such a well-known artist. But Genini is hopeful that bids will roll in later on. “It seems that they’re waiting right to the last hour in order to start bidding,” Genini told ARTnews.

Some have raised legal concerns about the Spike NFT. Copyright lawyer Jeff Gluck of CXIP Labs claimed that Banksy might have grounds to sue because he wasn’t involved. “If Banksy has not given his permission for this NFT, then it could appear to be unauthorized and illegitimate,” Gluck said in a statement. “The rights to create an NFT of an artwork are held by the creator, the copyright holder—not the person who possesses the artwork.”

Genini claimed that Valuart “did not copy” the work because the platform “re-elaborated on property we own.” He added, “We are not taking the piece of art making a digital copy. We digitized the property we own and the NFT is an installation as a CGI video production that we’ve worked with artists to create.”

Banksy, whose true identity remains unknown, tends to comment on his work on social media. Thus far, he has not posted about the Valuart sale.

Fifty percent of the realized price will be donated to different charities that help those who have endured violent conflicts. The first charity to receive donations will be Doctors Without Borders, which operates in Palestinian territories.

Spike was not the first time Banksy addressed the Israeli-Palestinian conflict. He has been working in the region for nearly 20 years now, having painted a mural in occupied Palestinian territories in 2003.

In 2011, Banksy encouraged graffiti artists from around the world to tag the West Bank Barrier, telling the Independent in 2011, “If you like dancing you go on holiday to Ibiza, if you like walls you go to Palestine.” In 2015, he made a fake promotional video for Palestinian tourism, citing the lovely views and showing rubble. Text reading “The locals love it so much they never leave (because they’re not allowed to)” was interspersed with images of graffiti that Banksy placed around Bethlehem. And in 2017, he founded the Walled Off Hotel (complete with a gift shop!) near the West Bank Barrier, which was billed as having “the worst view in the world.”