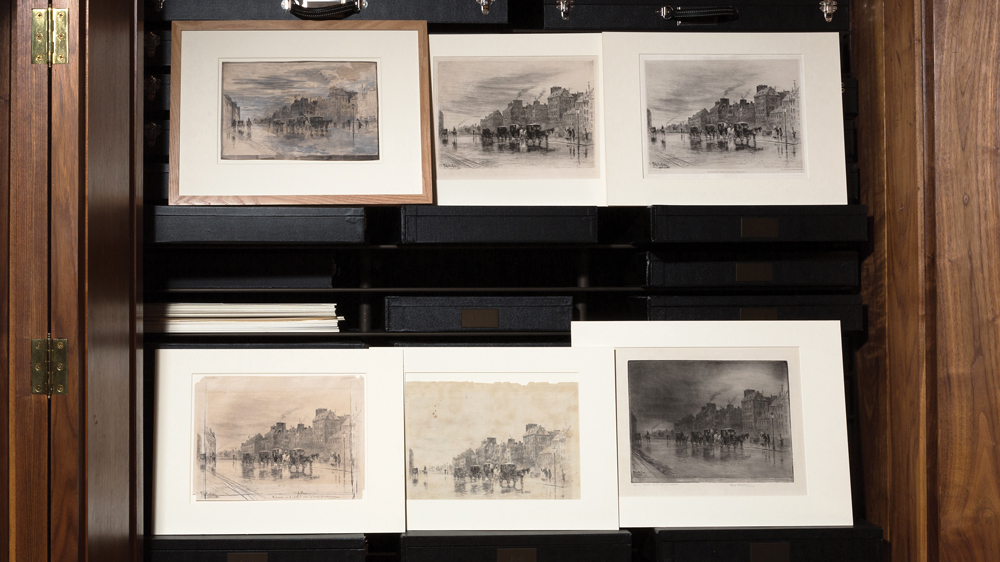 Upon entering the Sutton Place abode of real estate investor Charles Hack, one is thrust inside a personal Kunstkammer—a home that doubles as a cabinet of curiosities, striking in both the quality and quantity of works on view. Within a capacious foyer are furnishings by Austrian architect Josef Hoffmann, secessionist pieces by Franz von Stuck and Koloman Moser, and paintings by Belgian Symbolists Fernand Khnopff and Léon Spilliaert.

The living room is amply appointed with Renaissance bronzes, including a fanciful—if not altogether preposterous—aeolipile in the form of a pelican, its body adorned with a trio of pagan faces. Likely made as a presentation piece for Holy Roman Emperor Rudolf II, the 17th-century bronze vessel could produce a spectacular display of spewing steam as water within it came to a boil when warmed by the flames of a wood-burning fire. Atop a grand piano is a stack of recently purchased prints that Hack has yet to catalog. Many are by Félix Buhot, including a suite of six Parisian cityscapes from the 1870s that are nearly identical in composition yet different in atmosphere and tonality, each representing a different state in the printmaking process.

All that is on display attests an inquisitive mind and an exacting eye. Yet it is what one doesn’t readily see in this sun-drenched apartment overlooking the East River that is perhaps of greatest interest: an important collection of old-master drawings. Hack’s holdings are rich in 17th-century Dutch and Flemish works by such notables as Cornelis van Haarlem, Abraham Bloemaert, Hendrick Goltzius, and Peter Paul Rubens.

But as collectors know, sunlight and drawings do not good bedfellows make. To accommodate his cache, Hack commissioned a polished wood cabinet that contains double-sided vertical panels, which slide out and pivot so that light-sensitive works can be viewed and enjoyed.

While many of the works are signed, others are not, leading to spirited speculation about their authorship. “I bought this portrait as a [Lucas] Kilian,” says Hack of a diminutive drawing, “but I think it is too good to be by Kilian. It may be by Crispin de Passe. I love when experts come here and go through my collection, as I often wind up with a whole new collection.”

Abraham Bloemaert’s Cephalus and Procris (circa 1620), acquired from a private dealer in 1995  Photo: Courtesy Kristine Larsen

“This has an interesting story,” says Hack of the first old-master drawing to enter his collection—the Annunciation of the Shepherds, a mannerist work by Bloemaert (circa 1605). “In November 1992, I was in Amsterdam for a sale at Christie’s. I was interested in acquiring Goltzius’s Fall of Phaeton (circa 1588), which bidders quickly chased to a seemingly astronomical sum—about $100,000, if I remember. So I passed on it. And then the Bloemaert came up, which I bought as a bit of a consolation prize. I happen to be on the visiting committee of the prints and drawings department at the Metropolitan Museum of Art, and after that sale, I was chatting with one of their curators, bemoaning my loss. He replied with a smug look on his face, ‘We bought that one.’ It turns out I had been bidding against the Met. So now I regularly go and see ‘my drawing’ without having paid the $100,000. I think I see it more often than some of my own drawings.”

Within his study are still more bespoke cabinets, which open to reveal shelves chock-full of solander boxes, each containing still more drawings and prints. Of particular interest is an extraordinary oil sketch by Rubens, executed around 1634–35. “For me,” says Hack, “Rubens’s sketches are so much more immediate than his paintings, showing what the artist really does when he is not overworking his subjects.”

At Master Drawings New York, which runs January 27 through February 3, we have little doubt Hack will discover important works to expand and complement his holdings.