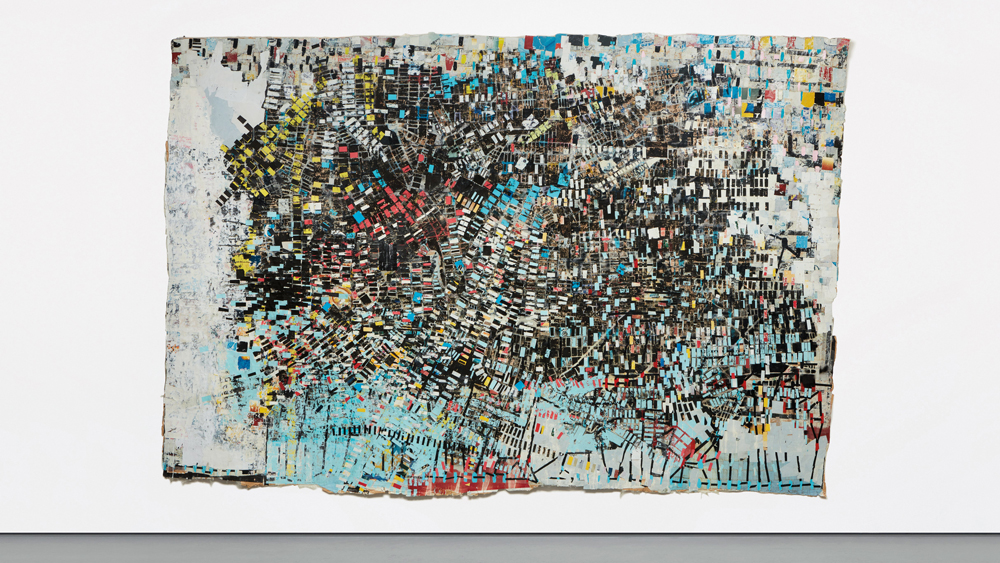 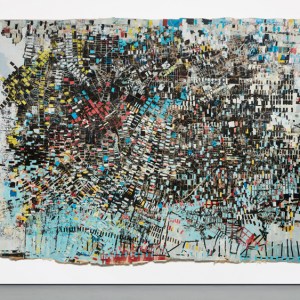 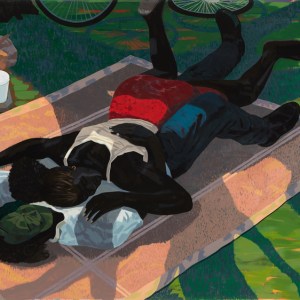 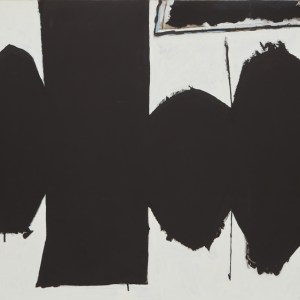 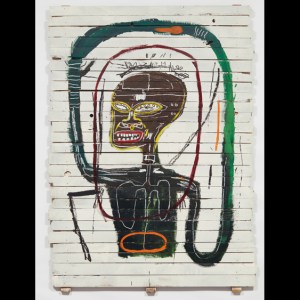 On the evening of May 17, Phillips in New York will be offering a tightly curated sale of 38 works by luminaries on the 20th-century and contemporary art scene, including market darlings Jean-Michel Basquiat and Mark Bradford, whose star has been ascendant since his stunning showing in the American Pavilion at the Venice Biennale in 2017. Ahead of the sale, Robb Report caught up with Jean-Paul Engelen, deputy chairman for the Americas, about a couple of his favorite lots and moves by the boutique house to carve out a niche in a crowded field.

On the heels of the record-setting sale of Mark Bradford’s massive mixed-media work Helter Skelter I (2007), consigned by tennis ace John McEnroe for $12 million, you have another work by the LA artist. Tell us about it.

Bradford is an artist whose work first appeared on the block at Phillips [in 2008], and we have been building momentum ever since. If you look at his top 10 results at auction, six of those sales were at Phillips, including Constitution IV (2013), which sold for $5.8 million in London in 2015. When we sold the Charles Manson–inspired Helter Skelter I, we thought, “Wow. That’s quite a commitment because [at 34 feet wide] it was so big.” But it was the right moment and the right time. When I was in Berlin recently, I spoke to Joanne Heyler, the chief curator at the Broad in Los Angeles, which bought the piece, and she’s very excited about having it in the collection.

Since that sale, a few more pieces have come to market or have been offered to us. But we realize that we have to be careful in what we take on. You can’t do the same thing again and again. Taking on a piece comes with a certain responsibility, so we want to make sure we choose the right piece. If you don’t sell a work by a living artist, it puts strain on your relationship with the collector, with the artist, and with the gallery, which in this case is Hauser & Wirth. The work we are offering in this week’s sale, Black Venus (2005) [which carries an estimate of $5 million to $7 million], is an absolute masterpiece, and it is very different from Helter Skelter I. It’s very colorful and quite happy in a way.

In addition to Bradford, Phillips has been a champion of a number of notable African-American artists.

We’re delighted to be offering the works we have. And from an African-American standpoint, this sale will stand out as we have a fantastic work by Kerry James Marshall: Untitled (Blanket Couple) (2014), which carries an estimate of $3.5 million to $5.5 million. The work is magnificent in that it is a take on a subject so well known in the work of artists such as [Georges] Seurat and [Edouard] Manet, but it places it in a fully African-American context. You rarely see a representation of two African-American people loving each other. The fact that we have this painting brings me a tremendous amount of joy.

As you may know, Phillips has been a supporter of Kerry James Marshall for a number of years, having sponsored his 2016 exhibition, which debuted at the Museum of Contemporary Art in Chicago and later traveled to the Metropolitan Museum of Art and the Museum of Contemporary Art in Los Angeles. Getting hold of works by the artist is difficult, to say the least, as there are so few of them. I compare him to Lucian Freud, with whom I had a very good relationship, and I know how long it takes him to finish one of his works. I think Marshall is one of the great artists of our time, but he is greatly undervalued. If you look at Artnet, for instance, you see his artist record is at $5 million or something, but Kerry James Marshall should be a $10 million artist. He is an eight-figure artist, and it is time for the market to recognize that.

Are you excited about any other standout lots?

Of course. We have a marvelous Jean-Michel Basquiat: his Flexible (1984), a panel painting in acrylic, which is expected to fetch in excess of $20 million. And we have Robert Motherwell’s At Five in the Afternoon (1971), one of his largest Spanish elegy paintings. Its title is a reference to the start of bull fights. There was an earlier, smaller version of the work, which Motherwell lost in his divorce from Helen Frankenthaler. The one we are offering [tagged at $12 million to $18 million] comes from the collection of Holly Hunt. We believe the painting may set a new artist record for Motherwell.

We also have quite a few women artists represented in the sale, including a politically charged work by Jenny Holzer, Truisms UNEX Sign (1983), an LED piece that leads off our sale. It carries an estimate of $150,000 to $200,000. And, on the lighter side, we are delighted to be offering Maurizio Cattelan’s Museums League (2018) (est. $20,000 to $30,000), a collection of 31 football scarves that the artist made for cultural institutions around the globe. As you may know, in Europe and throughout much of the world, football is big business, and people tend to take pride in their local teams. And Cattelan’s piece taps into that. It is quite kitsch, and what is so wonderful is that the proceeds from the sale will benefit the Brooklyn Museum.

By scoring such excellent consignments, Phillips is continuing to make quite a mark on the marketplace. What is your game plan?

We’re still very much a work in progress, but I think we are definitely going in the right direction with the help of great people. We strongly believe that this is a people’s business, and the better our team becomes, the better our sales will become. And we are indeed building a fantastic team.