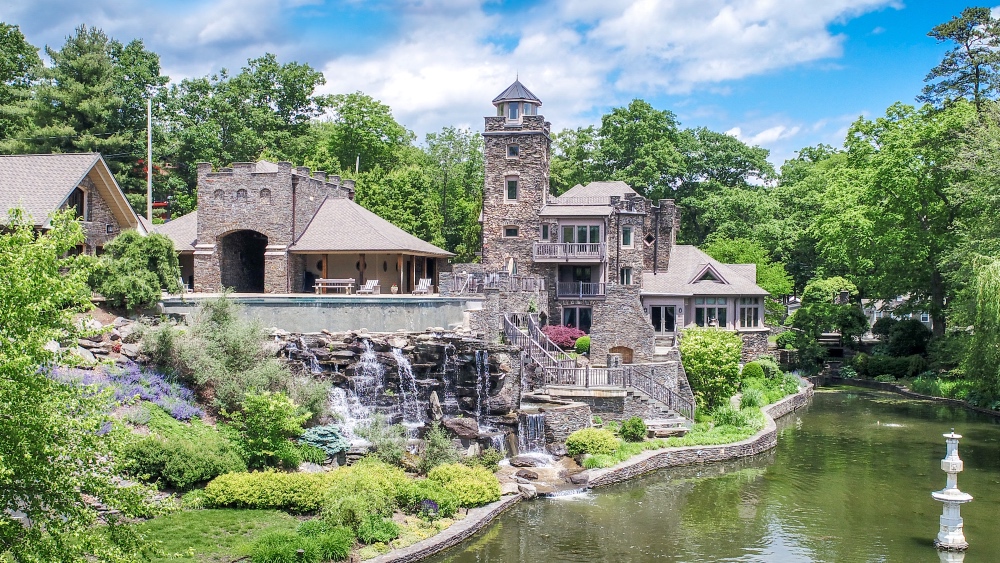 The four-acre Tiedemann Castle property is still looking for a new owner after spending four years on and off the market. Located roughly one hour outside Midtown Manhattan by car, the estate is ideal for owners who want to feel like Yankee royalty, with a 9,000-square-foot main residence that houses a staggering 24 rooms. If you’re still looking for space to stretch, the 2,000-square-foot lakefront guest house with a baseball-diamond-shaped infinity pool should do the trick.

The castle was first listed for $14.75 million back in June 2018. The auction, held by Paramount Realty, will have a minimum bid price of just $6.5 million—so there’s a chance to grab the estate for a fraction of the original asking price.

“The owner has elected to market and sell via Paramount’s luxury property auction platform because it is efficient and provides an element of finality,” said a company spokesperson in a press statement. “The owner is serious about selling because the owner spends most of his time in other family-owned homes.”

The storybook castle sits behind a stone wall and comes with its own medieval-looking tower. Manicured grounds surround the property, an ideal place for future homeowners to entertain guests or embark on a solo walk, with a serene waterfall and even a replica of the Statue of Liberty as backdrops. Inside, the estate has a billiards room and a bar to craft your favorite cocktails.

Jeter’s connection to the property dates back to summer adventures from his boyhood, as documented in the 2011 biography The Captain: The Journey of Derek Jeter by Ian O’Connor. The book describes Jeter’s grandfather William “Sonny” Conner as an adopted son of the Tiedemann family, the former owners of the estate.

The home was built around 1903 by a dentist based in New York City. After the estate was later damaged in a fire, the Tiedemann family purchased and restored it back to its castle-like appearance. Jeter then bought the property for $1.2 million, once it hit the market after the Tiedemanns sold the house in 2005.

The auction will occur alongside Wright Bros. Real Estate in Nyack, N.Y. Prospective buyers will have a chance to submit their bid until December 15.