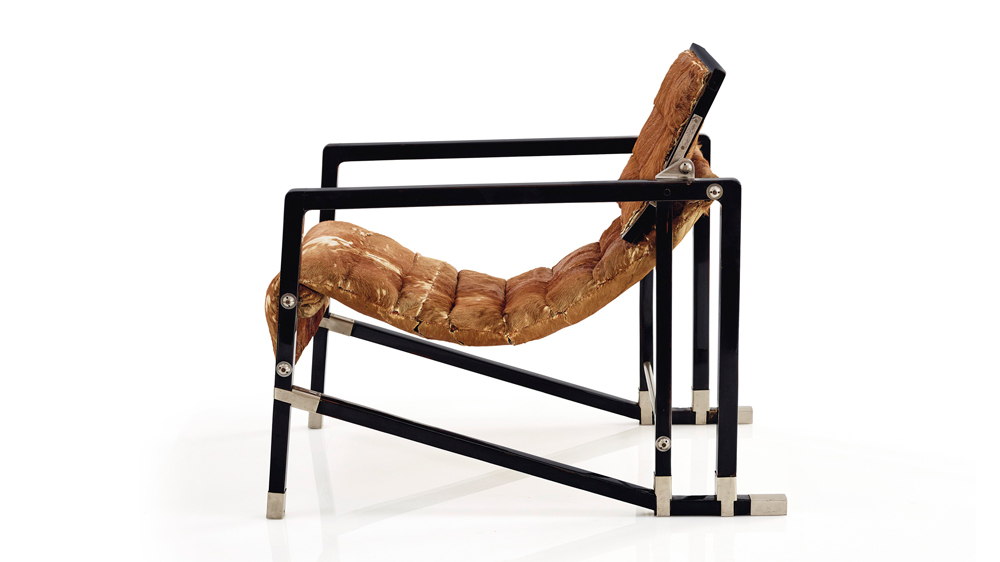 The French have enviable style. From fashion to food, it’s a culture that seems to do everything well, especially in the realm of design, where home furnishings are collectable and desirable in equal measure. Anyone interested in adding works by such famed designers as Eileen Gray, Pierre Chareau, Jean Dunand, Emile-Jacques Ruhlmann, and Jean Royère, just to name a few, have a rare opportunity to acquire some of their most covetable and iconic pieces at Christie’s in New York on June 20.

Among the 45 lots from two single-owner collections on offer is the sale catalog’s cover lot: Gray’s Transat armchair (dating from 1927 to 1930) in ebonized, lacquered wood and nickel-plated brass, which still boasts its original calfskin upholstery. “Only a dozen of these chairs are known,” says Sonja Ganne, international head of the design department at Christie’s, explaining that when they do come to market, few retain their original coverings. “On the rare occasion when they have, it is rarely in such excellent condition.” The armchair is tagged at $1 million to $1.5 million.

Also of note is a model MB405 desk and stool from around 1927 in iron and rosewood by Chareau. The sleek-lined desk, made for French industrialist Henry Kapferer, who had made a name for himself in aviation and oil, heads to the block with an estimate of $350,000 to $500,000.

Among the choice Royère lots is a set of four YoYo bar stools from the mid-1950s. The whimsical works in painted wrought iron and leather are part of a collection bearing the ring motif, which the designer debuted in 1955 at the Salon des Artistes Décorateurs. In time, the collection would include andirons, lighting, chairs, cabinets and tables. The seating quartet goes under the gavel with an estimate of $60,000 to $80,000.

A quartet of “YoYo” bar stools from the mid 1950s by Jean Royère hit the block at Christie’s in New York on June 20.  Photo: Courtesy Christie’s

Fans of Art Deco lacquered metal vases by Dunand will have 10 vessels to choose from. Dunand was among the first Westerners to have mastered the art of Japanese lacquer, having learned it from legendary practitioner Seizo Sugawara, who settled in Paris in the wake of the 1900 Exposition Universelle. The vases range in estimate from $15,000 to $90,000.

“The offerings at Christie’s this week rank among the highest quality,” says Ganne. Collectively, the works are expected to fetch $3.5 million.