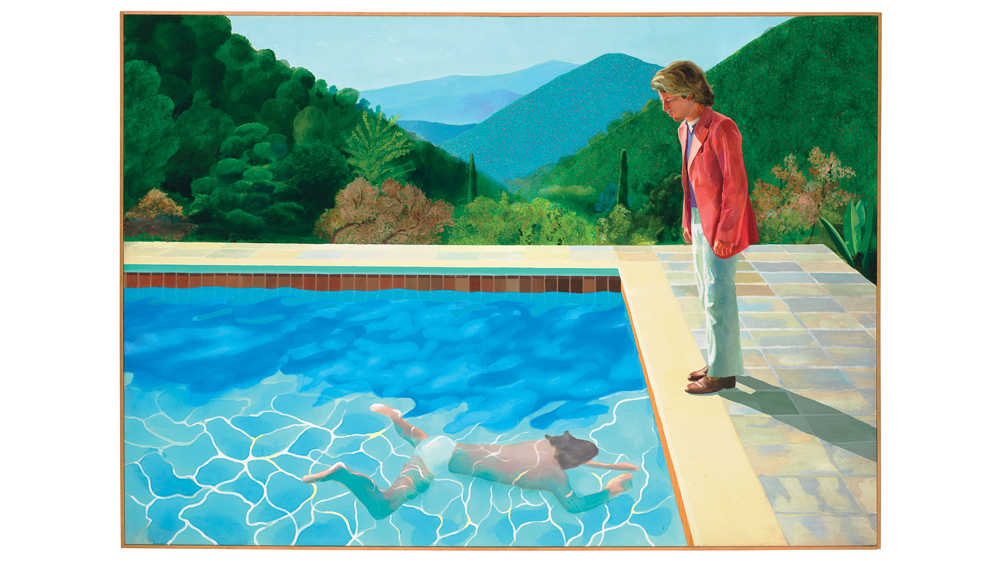 After a bidding war that lasted 9 minutes at Christie’s in New York last night, David Hockney’s 1972 canvas Portrait of an Artist (Pool with Two Figures) was hammered in at its unpublished pre-sale estimate of $80 million, making it the most expensive work by a living artist.

“If there is a defining picture in an artist’s career, this most certainly is it,” Alex Rotter, co-chairman of postwar and contemporary art at Christies, told Robb Report ahead of the sale. Brightly hued and handsomely scaled at 7 feet by 10 feet, the acrylic on canvas is among the most celebrated works by the 81-year-old British artist, having been included in his traveling retrospective organized by Tate Britain, the Centre Pompidou, and the Metropolitan Museum of Art just this past year. It is also the only known painting by Hockney that combines two of his most recognizable motifs—the swimming pool, which he took great interest in upon his arrival in California in 1964, and the device of the double portrait.

“There is so much self-biography and reflection within the picture,” Rotter said, adding that the pool itself is a metaphor for Hockney, while the swimmer represents his ex-lover’s new flame—the artist’s former paramour Peter Schlesinger standing poolside awaiting his arrival. “The work is in many ways a melancholy goodbye, as it captures the moment when Hockney realizes that he is now out of the picture.”

The final sale price with a premium of $90,312,500 crushed the previous auction record for a work by a living artist—held by Jeff Koons’s Balloon Dog (Orange) (1994-2000), which achieved $58.4 million at Christie’s in New York in November 2013. It also more than tripled Hockney’s own artist record at auction, which was set at Sotheby’s New York just this past May with the sale of Pacific Coast Highway and Santa Monica (1990) for $28,453,000. As of this writing, 5 of the artist’s paintings have notched more than $10 million on the block.