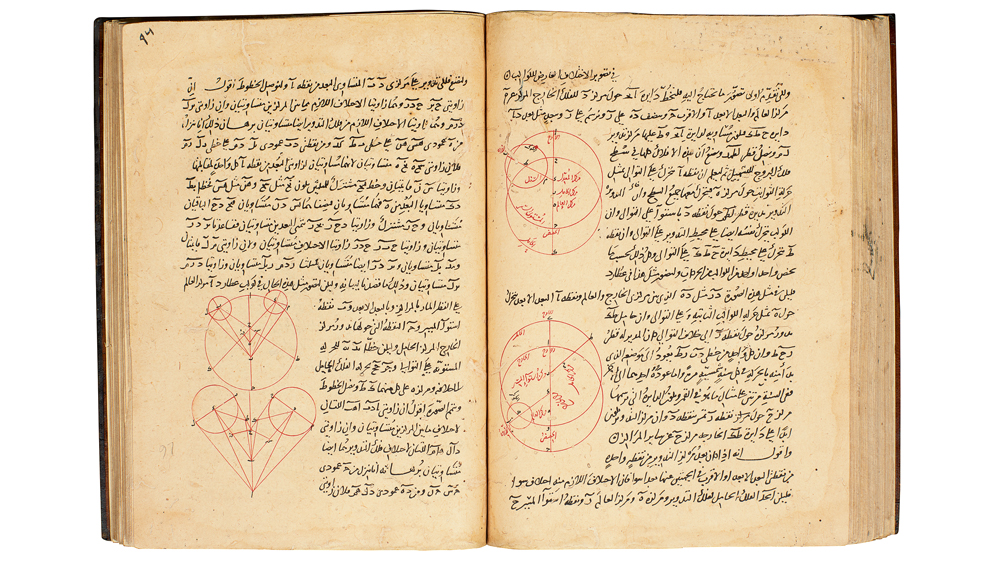 “Owing to the medieval Arabic scientific tradition, many Greek texts have been preserved and transmitted to future generations through the centuries,” says head of sale Benedict Carter of two important early manuscripts hitting the block at Sotheby’s in London on April 25. The first is a copy of Claudius Ptolemy’s Almagest, a mid-2nd-century AD treatise on the apparent geocentric motion of the stars and planets, which, in Carter’s estimation, “is arguably the most influential text on Arabic astronomy.”

The Greek original, he explains, was first translated into Arabic by al-Hajjaj ibn Yusuf ibn Mattar by the order of the caliph Al-Ma’mun during the first half of the 9th century. “The present manuscript,” he says, “titled Majisti baṭlamiyus al-taʿalimi fi’l-taʿalim and dated 671 AH [AD 1272], represents a rare abridgement of the 13 books of the Almagest.” Bound later in a leather binding, the manuscript on paper has 128 leaves plus two flyleaves, is written in cursive naskh (in black ink) with titles in bold black muhaqqaq (a type of calligraphic script in Arabic), and contains numerous diagrams and tables in red. It carries an estimate of £200,000 to £300,000 ($275,400–$413,100).

The second important volume is a 13th-century translation of Euclid’s Elements—a 13-volume, 3rd-century BCE treatise considered one of the pillars of mathematics. “Likely penned in Egypt, the North African manuscript is densely illustrated with diagrams and marginal notes,” says Carter, adding that “the scribes rendered the main text in naskh and the titles in thuluth script.” Like the Almagest, this 92-leaf manuscript is abundantly illustrated with technical diagrams. It is also tagged at £200,000 to £300,000 ($275,400–$413,100). “Copied in the 13th century in North Africa and Persia, respectively, both works bear witness to this important phase of conveying classical knowledge.”

Also of note, says Carter, is an early autographed copy of Kamal al-Din al-Hasan ibn ‘Ali ibn al-Hasan al-Farisi’s landmark work Kitab tanqih al-manazir li dhawi al-absar wa’l-basair (The Book of Correction of Optics for Those Who Have Sight and Mind). “Dated 708 AH [AD 1309] and penned in Persia, this manuscript is of exceptional historical importance,” he explains, adding that it draws upon the work of Ibn al-Haytham and the earlier Greek scholars Euclid, Ptolemy, Aristotle, and Galen.

According to its catalogue entry, the present manuscript of 321 leaves “covers various elements of optics, the physics of the eye, as well as light, vision, reflection, refraction, and various theories related to mathematics and geometry.” Interestingly, the first 17 leaves from the manuscript are now in the collection of the New York Public Library. The leather-bound work is estimated at £250,000 to £350,000 ($344,250–$481,950).