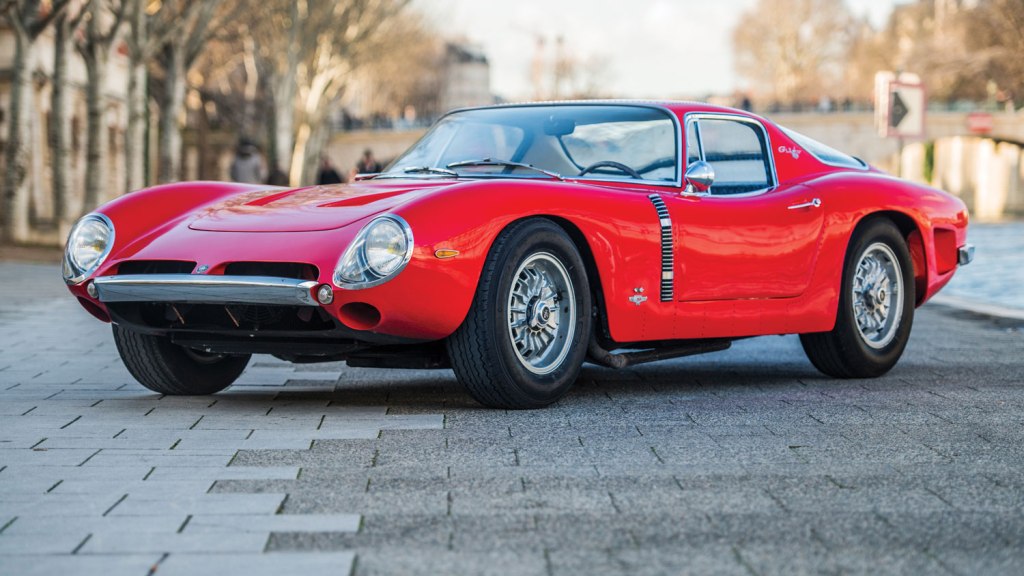 Among the featured cars going under the gavel at RM Sotheby’s during its fifth annual Paris sale on February 7 is a 1964 “riveted” Iso Grifo A3/C built by Modena-based Carrozzeria Sports Cars and formerly owned by Jean-Phillippe Smet, better known as Johnny Hallyday. Hailed as the “French Elvis,” the beloved pop star, who died this past December, was often pictured in and around the car in Paris in late 1964 and early 1965.

“Designed by racing legend Piero Drogo, the car was bred with endurance racing in mind,” says Augustin Sabatié-Garat, auction manager for RM Sotheby’s in Europe, adding that A3/Cs won in their class at Le Mans in 1964 and 1965. The car’s body, he explains, was fabricated from “avional,” an aluminum, copper, and magnesium alloy that is light and elastic but extremely difficult to weld. As a result, the A3/C body was riveted together much like an airplane, which earned the vehicle its moniker.

The late French pop star’s was often seen with his car in Paris in 1964 and 1964.  Photo: Courtesy Getty Images/RM Sotheby’s

The car (chassis No. B 0209), which has less than 17,000 miles on the odometer, is finished in dark red with black leather seats. According to the house, the car spent some 15 years in Michel Hommell’s Manoir de l’Automobile museum in Lohéac, France, before being put on display at Chantilly Concours last year.

“The riveted Iso Grifo A3/C is extraordinarily rare in its own right—being number eight of 10 cars that rolled off the factory floor in 1964,” says Sabatié-Garat. “Add to that its exceptional French provenance and former ownership by the late, and much loved, Johnny Hallyday, and you have a once-in-a-generation opportunity for collectors.” It carries an estimate of €2.5 million to €3 million ($3.1 million–$3.7 million).

Featured in the film The Racers, which starred Kirk Douglas, the Ferrari hits the block at RM Sotheby’s in Paris on February 7. It carries an estimate of €3.7 million to €4.5 million ($4.6 million–$5.6 million).  Photo: Courtesy RM Sotheby's

Other highlights include a 1953 Ferrari 166 MM Spider (chassis No. 0272 M), which was raced in numerous events across Italy throughout its model year. It was also used by MGM Studios to make the film The Racers starring Kirk Douglas. Described by Sabatié-Garat as a “joy to drive,” the 166 MM on offer has retained all of its “original mechanical components, including frame, engine, gearbox, rear axle, steering box, and all carburetors as well as most of its original bodywork.” These assets, says Sabatié-Garat, are further enhanced by its Hollywood connection. The 166 is tagged at €3.7 million to €4.5 million ($4.6 million–$5.6 million).

RM is offering a total of 84 vehicles during its Rétromobile-week sale on February 7 at Place Vauban.