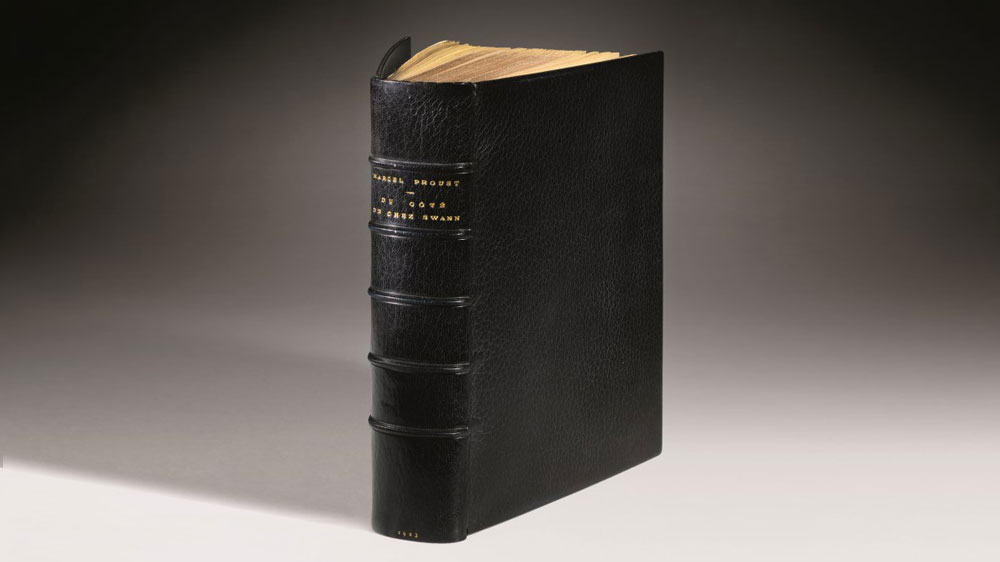 Marcel Proust had to push and push and push some more to get his novel Du côté de chez Swann (Swann’s Way) published. After many rejections, Bernard Grasset agreed to release it—if the author would cover the costs. Money not being an issue for Proust, he said yes. Around the time that the would-be classic went on sale on November 14, 1913, Proust took possession of five special first-edition copies of Swann’s Way printed on Japanese paper.

“These five copies are mythical for Proust lovers. They’re very famous,” says Benoît Puttemans, a books and manuscripts specialist at Sotheby’s Paris. Any time one comes to auction, it’s an event. The most recent appearance was at Sotheby’s in 2013, where the first copy sold for €601,500 ($822,936). The second copy appeared at Sotheby’s in 2001 and again in 2007.

The fifth copy is inscribed to Louis Brun, an assistant to Grasset and a bibliophile. Brun asked Proust to sign the book in 1916 after the author moved the series to a rival publisher. The inscription refers to the change of publisher, translating as: “To Mr. Louis Brun: this book, which is moving over to the Nouvelle Revue Française, has not forgotten its first friendship for Grasset. With affectionate memories, Marcel Proust.” Puttemans, himself a bibliophile, loves this copy because the inscription “speaks about the story of the book.”

The book is among 161 lots on offer in the sale.