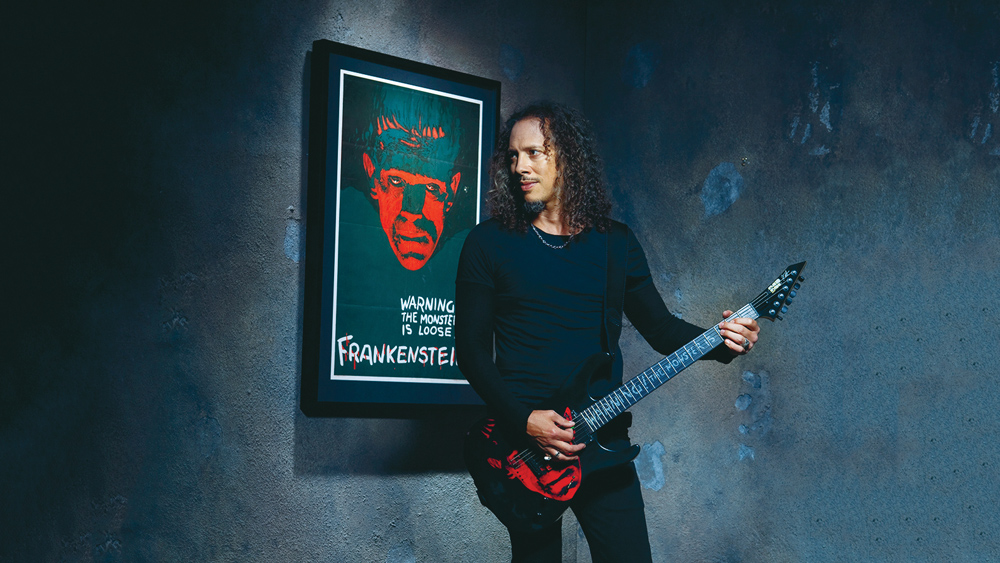 “There’s a lot of melancholy in Frankenstein. He is the ultimate outsider who’s also perhaps misunderstood.” —Kirk Hammett

Kirk Hammett embraced the dark side long before his days as a heavy-metal musician. The lead guitarist for Metallica was just 5 years old when he watched his first horror film: Day of the Triffids, a postapocalyptic thriller about human-eating plants. “I realized that Day of the Triffids was a different kind of movie,” Hammett recalls in the 2012 book Too Much Horror Business. “It gave me another sense, another feeling. And I enjoyed this ‘other feeling’ very, very much.”

He immersed himself in the shadowy, cinematic worlds of Dracula, Nosferatu, and Frankenstein’s monster, collecting movie posters and other ephemera. However, it wasn’t until the 1980s, when he acquired an original Bride of Frankenstein half-sheet, that fascination gave way to obsession. Today Hammett’s extensive archive—a portion of which is currently on exhibition at the Peabody Essex Museum in Salem, Mass., through November 26—spans more than a half-century of horror, from 1921’s The Cabinet of Dr. Caligari to 1981’s Evil Dead. But it is the posters depicting his favorite monster, Frankenstein, that he—and the collectibles market—values most. Among the guitarist’s highly prized pieces is a one-of-a-kind double-sheet poster for the 1931 original film starring Boris Karloff.

Hammett isn’t the only collector to fall under the spell of the infamous green-skinned fiend. Some of the scarcest—and most valuable—original movie posters feature Frankenstein and its sequels. Yet for Hammett, the allure lies not in the rarity or price of these pieces but in their ties to the eternal tale of a misbegotten creature struggling to fit into a world to which he doesn’t belong.

Timeline of Making a Monster Collectible

1931
Universal Pictures releases Frankenstein, the adaptation of Mary Shelley’s novel directed by James Whale and starring Boris Karloff. The film is a hit.

1935
The studio reunites Whale and  Karloff for the sequel, Bride of Frankenstein, which also features Elsa Lanchester. The film furnishes Universal with yet another commercial success.

2010
Heritage Auctions once again attempts a record, putting a blood-red one-sheet for Bride of Frankenstein on the auction block. Emblazoned with the words “Who will be the Bride of Frankenstein? Who will dare?,” the poster carries an impressive $700,000 estimate. But bidders fail to meet the reserve, and the poster goes unsold.

2015
An approximately 7-foot-long Frankenstein three-sheet—the only known example of its kind—becomes the most valuable printed work related to the film when it fetches $358,000 at Heritage Auctions.