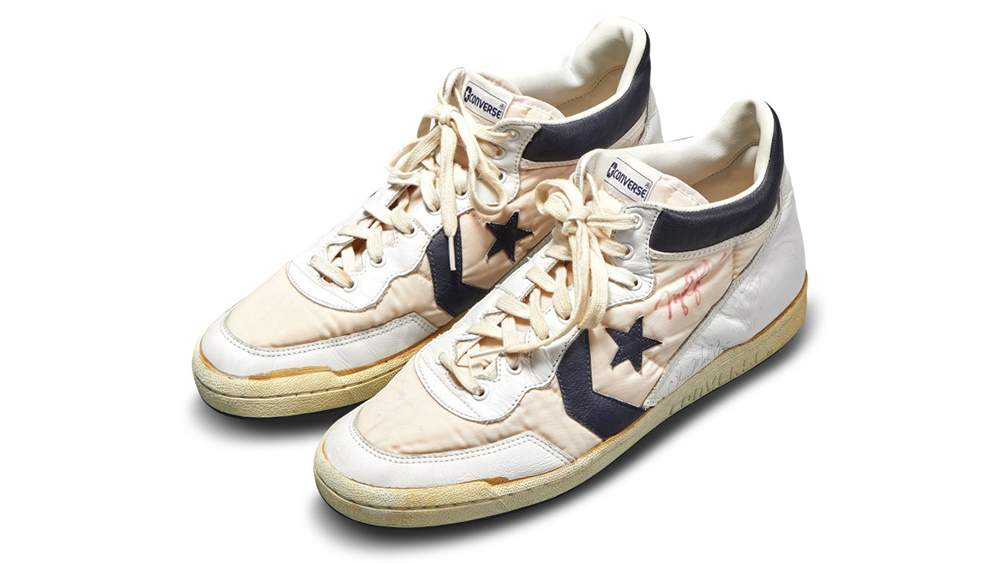 Now’s your chance to own a legendary piece of basketball history.

On July 23, Sotheby’s will auction off a pair of Converse Fastbreak sneakers Michael Jordan wore during the 1984 Olympic Trials. The size 13 pair was released in limited examples in 1983; both shoes bear Jordan’s signature. According to Sotheby’s, the sneakers are in excellent overall condition with visible signs of wear—which you’d expect from a game-worn artifact that’s close to 38 years old. .

An overhead and back shot of Jordan’s Converse sneakers headed to auction.  Sotheby's

Throughout college, Jordan consistently wore Converse before landing his infamous partnership deal with Nike. The pro-baller reportedly preferred Converse’s sneakers because they gave him better contact with the court. As a result, he pushed his Fastbreak sneakers to the limit during a mix of drills, practices and exhibition games against other NBA stars leading up to the 1984 Olympic Trials for basketball. Jordan went on to make Team USA, and helped win a gold medal just before his rookie season with the Chicago Bulls.

An up-close shot of the basketball champion’s signature on the right sneaker.  Sotheby's

Whatever the sneakers contributed to Jordan’s game touched off a decades-long winning streak. In 1992, the basketball champion returned to the Olympic Games in Barcelona, winning another gold medal as part of the ‘Dream Team.’ By the time he retired, Jordan was a two-time Olympic Gold Medal winner, a six-time NBA champion, a five-time league MVP and a 14-time All-Star. The iconic athlete is also a three-time NBA All-Star Game MVP, a 10-time scoring champion and a two-time Slam Dunk Contest Champion. Topping his esteemed resume sits the Presidential Medal of Freedom awarded in 2016—the highest civilian honor in the United States.

The sneakers come with a letter of opinion from MEARS Authentication that grades the shoes as authentic. A letter of provenance will also be provided to the collector, detailing the footwear’s history of ownership. They’ll will be presented as part of Sotheby’s “The Olympic Collection” sale, which will include other rare and historic sports memorabilia just in time for the approaching Tokyo Olympics. The bidding begins on July 23. For more information on Jordan’s worn and signed Converse, head over to Sothebys.com now.

Check out more images of the footwear below.