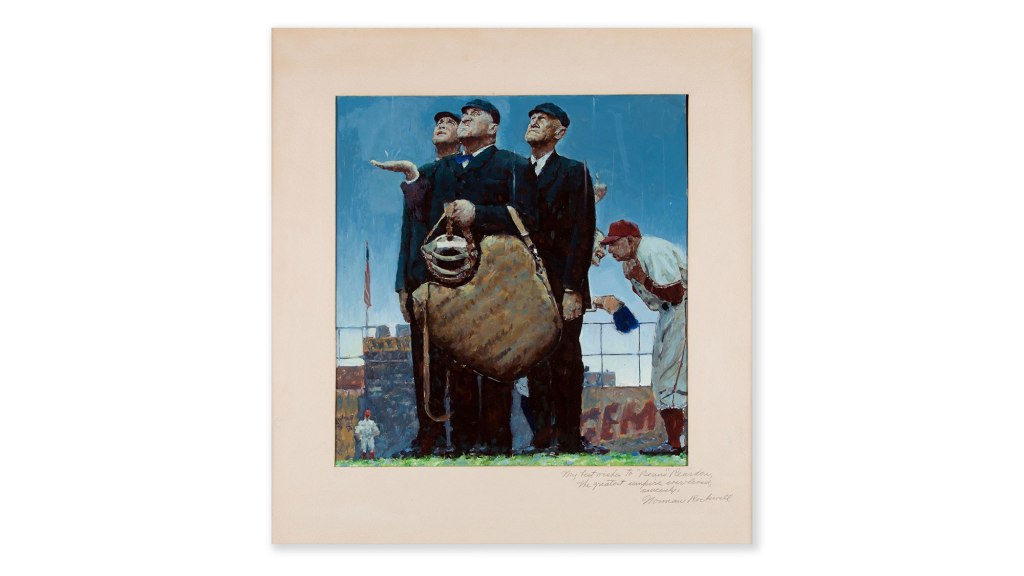 For the second time in three months, the auction record for a Norman Rockwell study has been broken. In May, Rockwell’s study for his 1960 Triple Self Portrait fetched $1.3 million; in August, a study for Tough Call, a 1949 image of three umpires frowning at the rain, sold for $1.6 million.

Heritage Auctions of Dallas sold both artworks, the first in an American art sale and the second in its August 19 and 20 Platinum Night Sports Collectibles auction. Prior to those sales, the Rockwell record belonged to a 1954 study for Breaking Home Ties, which sold at Sotheby’s in 2013 for $905,000.

With original Rockwell oil paintings for iconic Saturday Evening Post covers climbing well into the double-digit millions, it was inevitable that studies—works that Rockwell made in the process of creating a finished painting—would cross the million-dollar threshold. “We were encouraged that it would happen, and we hoped Heritage would set the record,” says Aviva Lehmann, director of American art at Heritage Auctions in New York.

The newest record, Tough Call, was consigned by the descendents of one of the umpires who modeled for the Post cover. (Rockwell was known to be generous with his artwork, freely doling it out to models, friends, and neighbors.) Auctioned during Heritage’s online-only sports sale, the piece lured 15 hungry bidders, driving the final sale price to more than five times the original estimate of $300,000—and proving that Rockwell studies are indeed following in the profitable footsteps of the artist’s highly valued oil paintings.