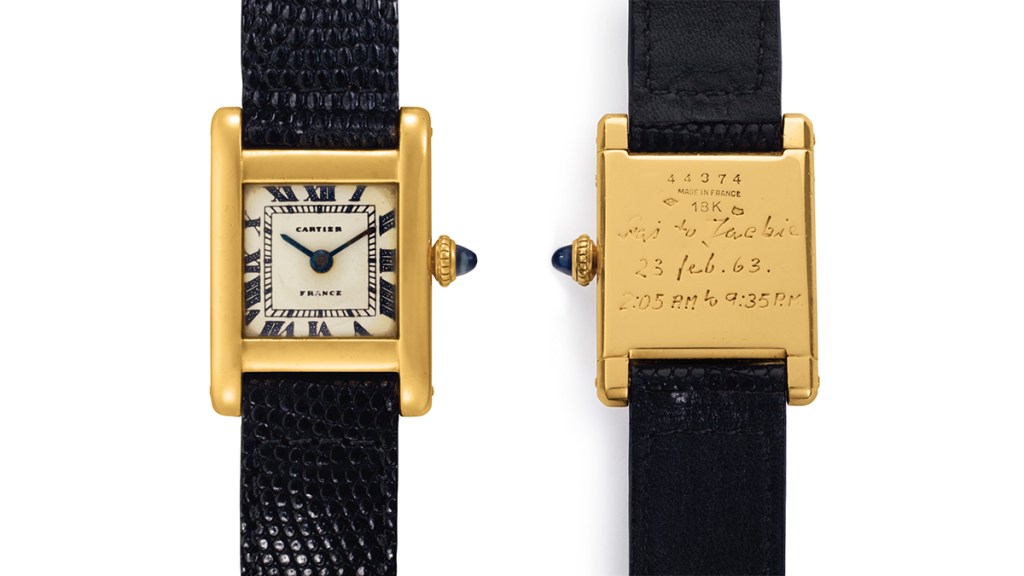 Watches previously owned by celebrities have often pulled a healthy premium at auction, and we expect little to change in the case of the three watches featured below. The classic pieces from Cartier, Jaeger-LeCoultre, and of course Rolex, are all in respectable condition—perfectly capable of fetching a respectable price before even considering the icons whose wrists they once adorned.

Without resorting to hyperbole, it’s fair to say that Paul Newman’s personal Rolex Daytona is one of the most significant and iconic vintage watches to head to auction in over a generation. Not only did the piece give birth to the nickname of the “Paul Newman Daytona”, but it also has never been sold publicly in all these years. Estimated at over $1M (with many speculating a price in excess of $5M), the piece will head to auction at the Phillips’ inaugural New York Watch Auction: WINNING ICONS – Legendary Watches of the 20th Century taking place on October 26th.

Viewed as one of the more significant artifacts to surface from the Kennedy estate in recent years, Jackie O’s Cartier was a gift given to her by her brother-in-law Prince Stanislaw “Stas” Radziwill in 1963 to commemorate the famed 50 Mile Hike completed by Stas and Chuck Spalding that Jackie wound up painting. Both the painting and the watch will hit the auction block with Christie’s in New York on June 21st as part of the Rare Watches and American Icons auction.

Al Capone is, let’s say, a different kind of famous. But that doesn’t make his watch collection any less significant. The mighty mobster’s pocket watch by Illinois is cased in platinum and encrusted in a healthy smattering of diamonds, including his initials set in diamonds on its caseback. Being sold via RR Auction as part of their Gangsters, Outlaws, and Lawmen auction running from June 15th to 24th.

Though he has appeared in a number of ads for Rolex and Timex (among many others), Bob Hope is not considered to have been an avid watch collector. That makes this clean Jaeger-LeCoultre a particularly rare piece of memorabilia from the legendary film and TV star. Inscribed with “FROM THE PHILA COMMITTEE OF THE LOS ANGELES SANATORIUM, “THE CITY OF HOPE,” TO AMERICA’S BOB HOPE, 11-6-47″, it is presumed that Bob spent time performing for those suffering from cancers and other debilitating diseases at the facility. The watch will appear alongside Jackie O’s Cartier in the New York Rare Watches and American Icons auction.