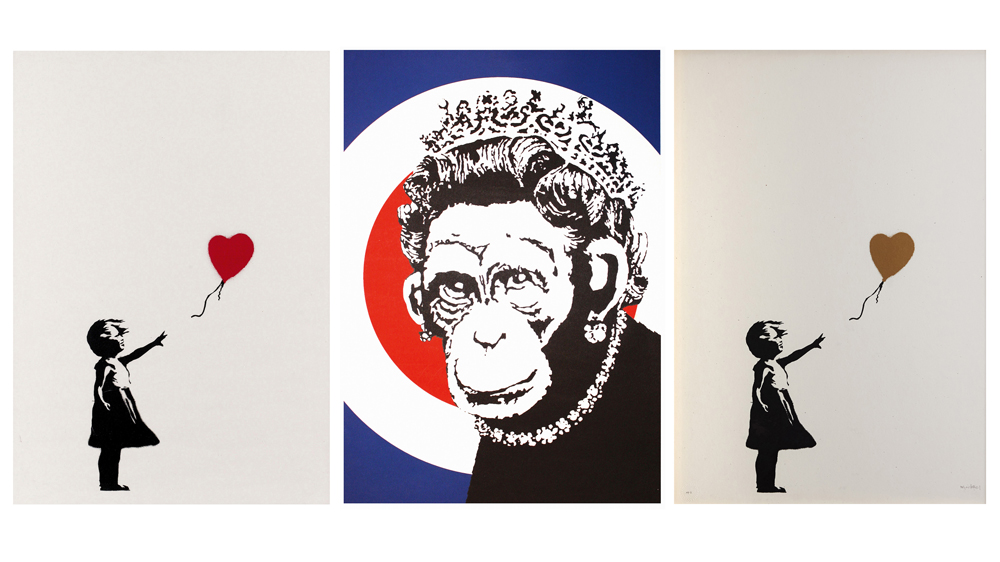 There is little doubt that the British prankster street artist Banksy is having quite the media moment following the October 5 antics at Sotheby’s in London: His Girl with Balloon (2006) shredded itself after being hammered in at £860,000 ($1.13 million during an evening sale of postwar and contemporary art. Now, rival Phillips is hoping to capitalize on the artist’s rising star power with a dedicated selling exhibition titled “Banksy: Who’s Laughing Now?,” which runs through December 7 at the auction house’s Hong Kong outpost.

Among the 27 lots on offer—all hailing from a single European collection—are two 2004 screen prints on wove paper of that now-iconic image, Girl with Balloon. One is an artist proof with its subject releasing a gold balloon; the other, bearing number 420 from an edition of 600, is spot-colored with a bright red balloon.

Other whimsical highlights include two works executed in spray paint on canvases—Family Target (2003) and Monkey Poison (2004)—and Love Is in the Air, a 2003 screen print on wove paper depicting a masked homie throwing a bouquet; the latter is marked with number 418 of an edition of 500. A personal favorite of this writer is Monkey Queen (2003), a screen print that depicts the reigning British monarch as a bejeweled primate.

The works carry estimates ranging from $20,000 to a lofty $3 million considering that Banksy’s artist record at auction currently stands at $1.87 million—a record set with the sale of Keep it Spotless (2007) at Sotheby’s New York in February 2008.

Banksy’s “Love is in the Air” (2003) is on offer at Phillips.  Photo: © Pest Control Office, Courtesy of Phillips

“While remaining anonymous, Banksy has managed to become one of the world’s most recognized artists, having built a celebrated body of work using satire, dark humor, and irony, with attributes that make his art universally appealing,” says Miety Heiden, deputy chairman and head of private sales for Phillips. As a result, she adds, his appeal is growing around the world, and that certainly includes Asia, which is why the auction house has mounted its exhibition in Hong Kong—a rising cultural capital.