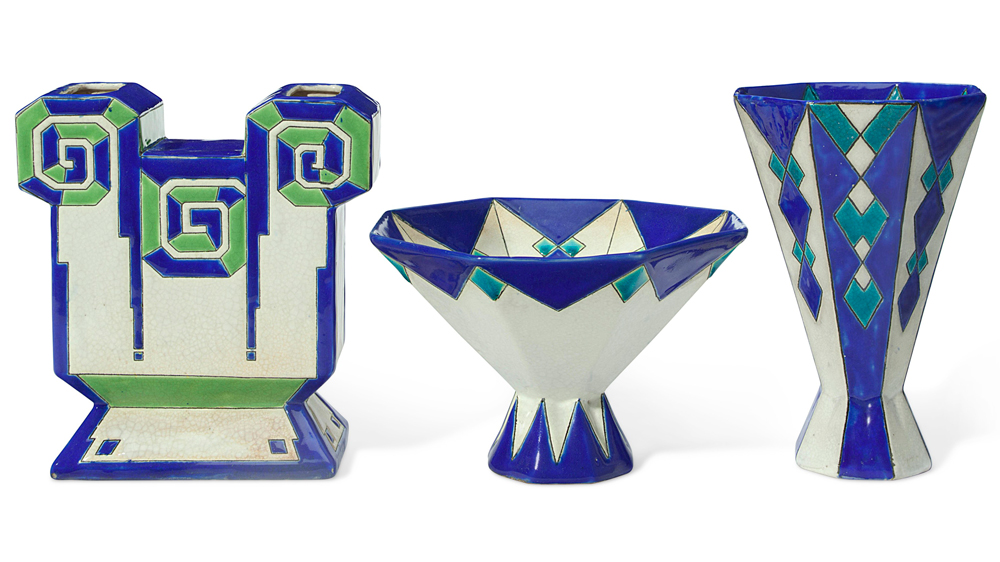 Not long after his arrival at the Boch Frères atelier in La Louvière, Belgium, in 1906, French master ceramicist Charles Catteau began to revolutionize the manner in which pottery was produced. “His pioneering developments of form, technique, and decoration transformed ceramics into an exceptional class of Art Deco wares,” says Sophie Sevenoaks, a specialist in decorative arts at Christie’s, adding that in 1907 Catteau was appointed head of the Boch Frères decoration department, which eventually came to be known as the Atelier de Fantaisie. “Catteau was single-handedly responsible for bringing Art Deco wares into formal production at Boch Frères Keramis and was successful at making their industrially produced ceramics feel like they were individually created.”

Christie’s is currently offering 38 lots of wares designed by Catteau during the first half of the 20th century in an online sale that runs through August 23. All hail from the extraordinary design holdings of the late collector and prominent patron of the arts Melva Bucksbaum, who endowed the Bucksbaum Award at the Whitney Museum of American Art.

Two “tazzas” bearing designs inspired by the wares of ancient Greece and Rome (est. $1,000–$1,500) are being offered online by Christie’s through August 23.  Photo: Courtesy Christie’s

Among the highlights, says Sevenoaks, is a quartet of vases bearing a “crackled enamel” glaze, a treatment Catteau began experimenting with in 1921. The vases, which collectively carry an estimate of $1,000 to $1,500, bear two different designs that could be modified depending on the vase shape. Another favorite is a pair of “tulip” vases of a type that was often colorfully decorated. These, however, “bear a simple white glaze that highlights the refined design and execution of stylized forms.” The pair is tagged at $800 to $1,200.

A pair of white glazed “tulip” vessels designed by Charles Catteau for Boch Frères Keramis carry an estimate of $800 to $1,200.  Photo: Courtesy Christie’s

Also of note, she says, are two tazzas, bearing a matte glaze with designs inspired by the wares of ancient Greece and Rome. “Not only is the form engaging, but the dark glaze on the outside compliments the radiantly colored centers within. The matte glaze and use of striking colors truly showcases the evolution of Catteau as an artist. By consistently experimenting with chromatic effects and evolving motifs, Catteau cemented himself as one of the most dynamic ceramicists of the 20th century.”