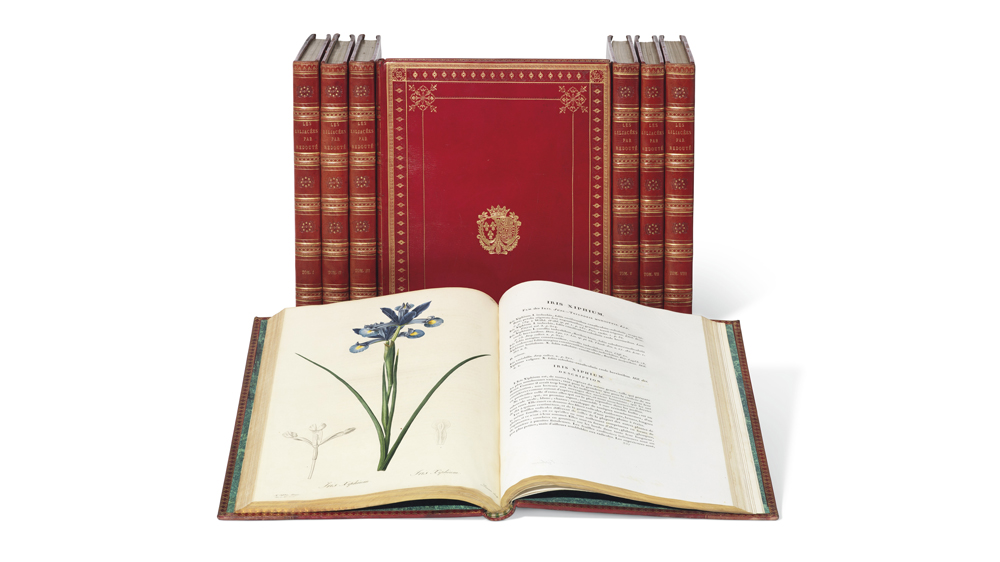 Hailed as a masterpiece of botanical illustration, an 8-volume edition of Pierre-Joseph Redouté’s Les Liliacées (1802–16) leads a sale of important books and manuscripts at Christie’s in London on July 11. “The work, which hails from the library of one of his most influential students and patrons, the Duchesse de Berry, was the first of Redouté’s three major collections of botanical illustrations,” says London sale coordinator Robert Tyrwhitt, the other two being his Les Roses and Choix des plus belles fleurs.

In the early years of the 19th century, says Tyrwhitt, the Belgian botanist and painter had come to the attention of the Empress Josephine, the first wife of Napoléon Bonaparte, who would later become his patron. And it was for her that Redouté produced some of his best work. “Many of the flowers depicted in Les Liliacées were drawn at the empress’s residence at Malmaison,” he explains, adding that the artist named a rare specimen after his royal patron, Amaryllis josephinae. “He illustrated the flower’s luscious beauty as the sole double-page plate included in the offered work.”

According to the house, Les Liliacées was limited to 280 copies, which were issued in 80 parts between 1802 and 1816. The accompanying text for volumes 1 through 4 was penned by Augustin-Pyramus de Candolle; volumes 5 and 6, by François Delaroche; and volumes 7 and 8, by Alire Raffeneau-Delile. The whole of the work was printed in Paris by the Didot family, its members notable players in the evolution of typography.

“This copy of Redouté’s Les Liliacées is perfectly suited to today’s ‘masterpiece’ market,” says Margaret Ford, international head of the rare books department at Christie’s.  “It is a connoisseur’s copy, combining importance with exceptional beauty and provenance, having been bound for royalty—the Duchesse de Berry; it has changed hands only twice in two centuries.” The volume is tagged at £350,000 to £ 500,000 ($471,450–$673,500).