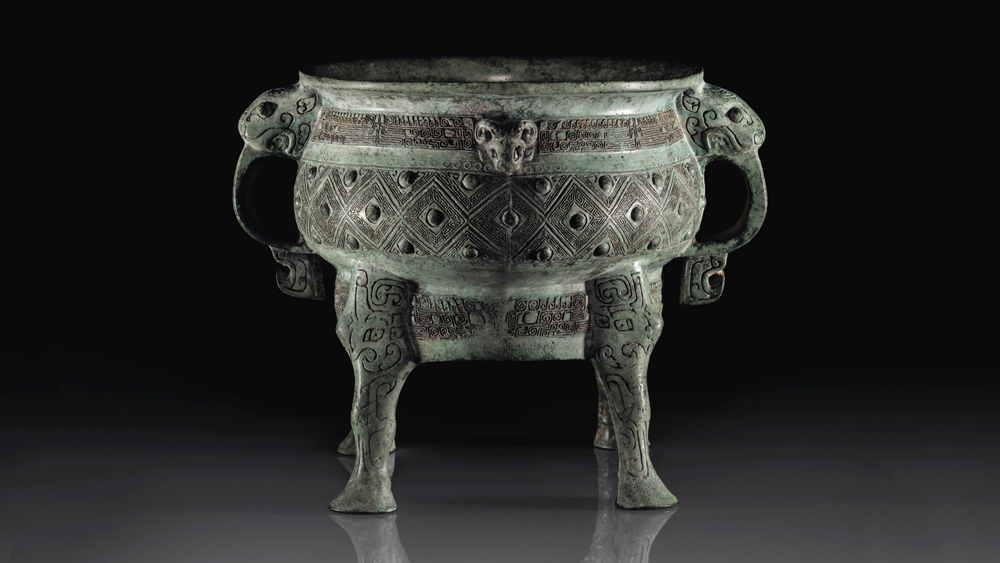 The Zuo Bao Yi Gui, a 1,000-year-old Chinese bronze made during the early years of the Western Zhou dynasty, is among the treasures being offered in a marathon round of sales at the major auction houses during this year’s fall edition of Asia Week in New York, which runs through September 14. (Over the course of five days, Christie’s will hold nine sales, Sotheby’s five sales, and Bonhams three sales, including one dedicated to Japanese and Korean art.)

With regard to the Zuo Bao Yi Gui, Olivia Hamilton, a specialist in Chinese works of art at Christie’s, says the ancient ritual food vessel is notable not only for its rare form—with its tall, hoofed legs and beautiful patina—but also for its exquisite provenance: It was formerly in the collection of none other than the long-reigning Qianlong Emperor, who included it in his famed antiquities catalogue, Xiqing Gujian, in 1755.

An inscription within a 1,000-year-old Chinese bronze reads “zuo bao yi,” a phrase that can be translated as “made this precious honorable vessel.”  Photo: Courtesy Christie’s

The ornate bronze takes its name from an inscription on its interior that reads zuo bao yi, a phrase that can be translated as “made this precious honorable vessel.” The inscription, explains Hamilton, indicates that it was commissioned by someone of high status and wealth. “The vessel is thought to be one of only seven archaic bronzes from the emperor’s collection remaining in private hands.” And, according to her colleague Ling’ao Tong, it is one of only 15 known bronzes of this type in existence; the rest are held in museum collections. The rarity hits the block in a single-lot sale at Christie’s on September 13, where it is expected to fetch $4 million to $6 million.

A Tang Dynasty figure of a Bodisattva is among the Asia Week highlights hitting the block at Sotheby’s on September 12, tagged at $1.5 million to $2 million.  Photo: Courtesy Sotheby’s

Other Asia Week highlights include a Tang Dynasty limestone figure of a Bodhisattva with traces of red, blue, green, and gilt pigments (estimate: $1.5 million to $2.5 million), which will be offered at Sotheby’s on September 12, and a Meiji period bronze incense burner bearing a winged Pegasus, which may have been made by Suzuki Chōkichi circa 1880. It also hits the block on September 12 at Bonhams and is tagged at $90,000 to $120,000.