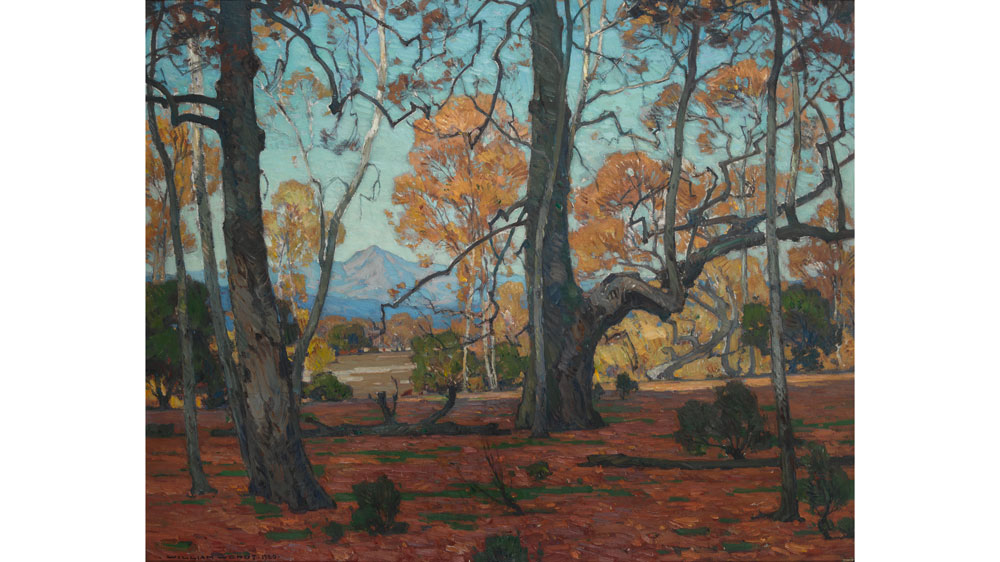 On August 7, Bonhams in Los Angeles is offering 142 California Impressionist, Fauvist, and Tonalist works in its seasonal sale of California and Western art—the most important of which is William Wendt’s Patriarchs of the Grove, an oil on canvas from 1920 that is expected to command $250,000 to $350,000.

“Patriarchs of the Grove is arguably one of the most celebrated and important early California paintings of its time, attested to not only by all of the contemporaneous attention bestowed upon it, but also by its nobility, size, design, and artistry,” says Scot Levitt, director of California and Western art at Bonhams. Images of the iconic work, which exemplifies the artist’s ability to capture the magnificence of the California landscape, he explains, were reproduced in the most respected publications of the time, including the Los Angeles Times. According to the catalogue notes, the painting was acquired in 1929 by Alvah Griffin Strong—a direct descendant of Henry Alvah Strong, cofounder and the first president of the Eastman Kodak Company—after an exhibition at the Stendahl Galleries, which represented the artist, and remained the Strong family for more than 80 years.

Other notable works include Laguna Beach (1915–16), a classic plein air painting by Guy Rose, a leading California Impressionist who had spent a number of years living in France, where he was deeply influenced by such European Impressionists as Claude Monet. The pale-toned work is tagged at $150,000 to $250,000

Beyond the Wendt and Rose canvases, says Levitt, the Pacific Northwest is well represented in the sale by a stunning collection of early 20th-century Alaskan landscapes by Sydney Laurence, among them Mount McKinley, 63° North Latitude, Alaska, Altitude 20,390 Feet (1911–12). The oil on canvas, one of the artist’s earliest and largest known depictions of the mountain—now known by its indigenous Native American name Denali—carries an estimate of $80,000 to $120,000.