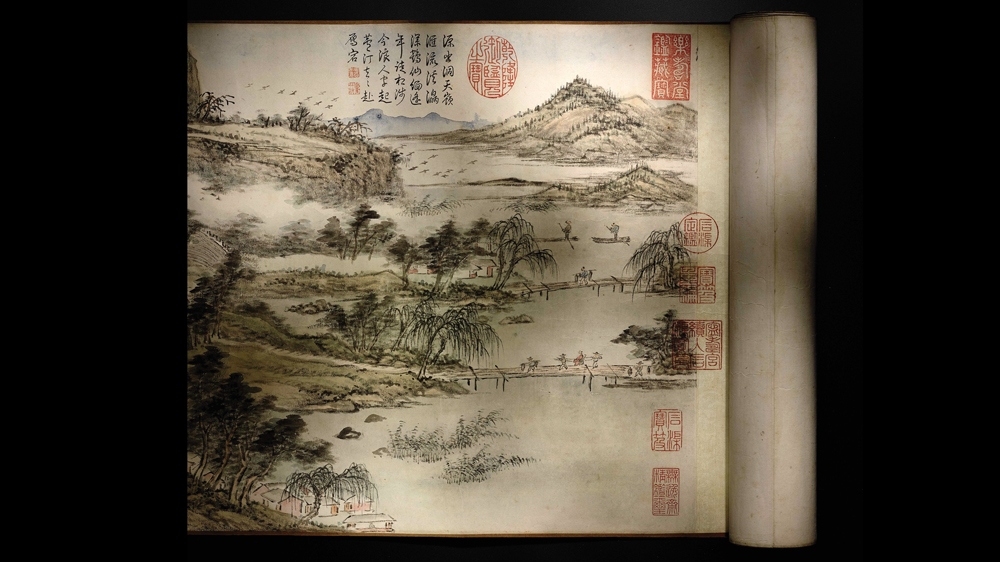 In 2017, sales notched $63.7 billion worldwide, thanks in part to notable sales such as Leonardo da Vinci’s Salvator Mundi (ca. 1500), which achieved an astounding $450,312,500, and a Song Dynasty Ru ware brush washer, which commanded $37.7 million—the highest sum ever paid for a Chinese porcelain. In addition to the Salvator Mundi, two other more recent lots have caught the attention of Robb Report for the spirited bidding they invited—Mark Bradford’s Helter Skelter 1, previously owned by tennis ace John McEnroe, and an 18th-century Chinese scroll by imperial court painter Qian Weicheng.

Hailed as the masterpiece by the 18th-century imperial court painter Qian Weicheng, Ten Auspicious Landscapes of Taishan—which is inscribed with 10 poems written by the Qianlong Emperor—spurred a 40-minute contest that drew more than 100 bids. Collectors chased the scroll to $18.7 million, more than double its $8.9 million high estimate, at Sotheby’s in Hong Kong on April 3.

For a mere three minutes, time seemed to all but stand still as three bidders vigorously vied for Helter Skelter I, a 34-foot-wide Charles Manson–inspired mixed media on canvas by Mark Bradford. Executed in 2007, the work hailed from the collection of tennis champion John McEnroe. It achieved $11,977,943—an auction record for a living African-American artist—at Phillips in London on March 8, with the Los Angeles–based Broad museum placing the winning bid.

Following a bidding war that lasted nearly 20 minutes, Leonardo da Vinci’s Salvator Mundi (circa 1500) sold for an astounding $450,312,500 at Christie’s in New York on November 15—the “timeless treasure” tendered in a sale of postwar and contemporary art. The oil on panel, which easily quadrupled its unpublished estimate of $100 million to become the most expensive work of art ever sold, is bound for the Louvre Abu Dhabi.