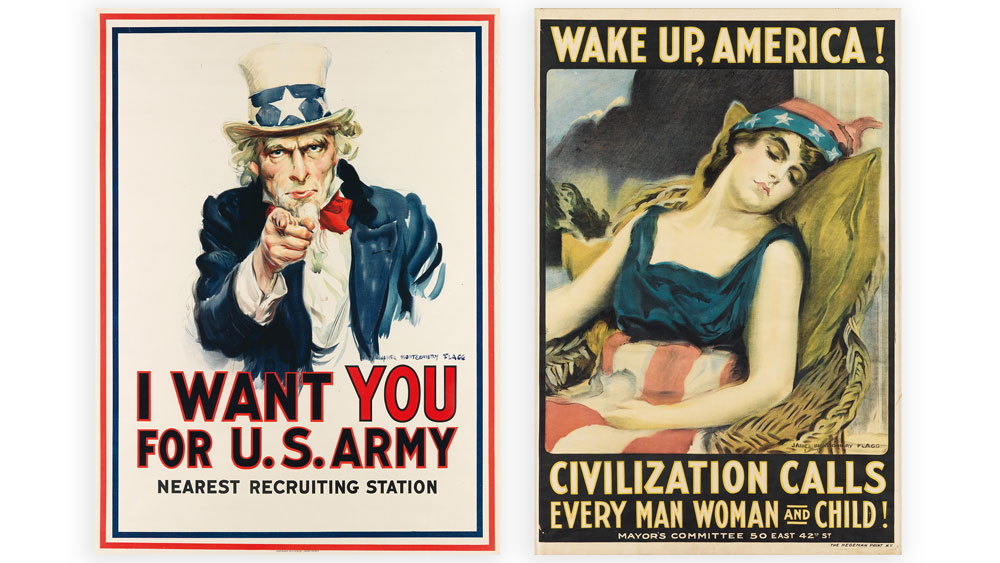 War is hell, and World War I was a special kind of hell . . . but the recruiting posters sure were glorious. Swann Auction Galleries is marking the 100th anniversary of the United States’ entry into the war on August 2 with a monumental auction of more than 100 propaganda posters from Russia, Britain, Canada, Germany, France, and the U.S.

Despite the call to arms they encouraged, war posters were—in a word— “great,” says Nicholas Lowry, director of Swann Auction Galleries’ vintage posters department. “They were collectible patriotic American images, and they were basically free,” Lowry says. “The government wanted them up everywhere, so they gave them out.”

What made the WWI recruiting posters particularly great were special circumstances that rarely came to pass: The government invited the country’s best illustrators to design the posters and then generally accepted the creations without revision or censorship. “They’re very creative—very individual,” explains Lowry.

Auction lots range from J.C. Leyendecker’s somber, classic-looking “America Calls: Enlist in the Navy” (estimated at $2,000 to $3,000) to the borderline risqué Howard Chandler Christy poster, “Gee!!! I Wish I Were a Man” (estimated at $1,500 to $2,000). “This is a pretty woman making a very flirtatious and sexually challenging comment,” Lowry says. “If you don’t [join the navy], it means you’re a girl, basically.”

James Montgomery Flagg’s “I Want You for U.S. Army” (estimated at $7,000 to $10,000) is easily the most famous American WWI poster. The sketch of a confrontational, finger-pointing Uncle Sam was so popular—four million were printed—that it was revived decades later to recruit American troops for World War II. But Flagg made at least eight other strong propaganda images for that era, including “Wake Up, America! Civilization Calls” (estimated at $4,000 to $6,000), a scarcer poster that pictures the figure of America dozing as the fires of war literally burn in the background.