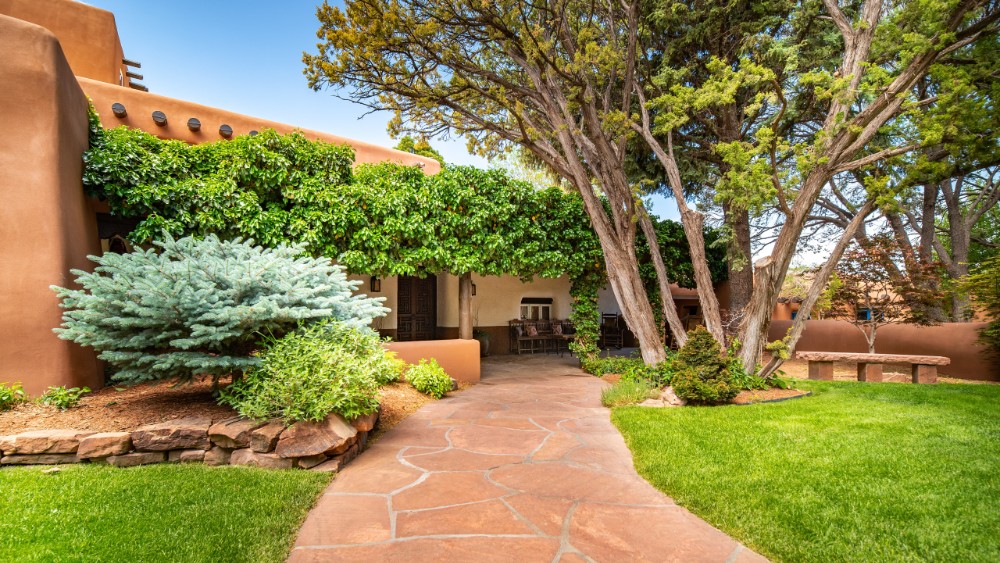 When late billionaire and Microsoft co-founder Paul Allen first stepped foot on this Santa Fe, New Mexico, property, he was entranced. “About 20 years ago I sold the home to Paul Allen and he lived here until he passed away a few years ago,” says listing agent Paul Duran of Keller Williams. “At the time I had shown Paul several properties over an 18-month period, but when he walked into this one, it was love at first sight.”

Apparently, a similar reaction happened with another former owner, renowned artist Georgia O’Keeffe, in the 1980s. Now, following those two notable residents, the home is back on the market for $17.5 million with a nearly $5 million price cut from last year.

The backyard is filled with greenery.  Herschel Mair

The tranquil 20-acre retreat is a quintessential Southwestern-style home that offers solace to anyone who steps foot past its private gates. The three-story main house was built in the 1930s and has a Spanish Pueblo Revival style with adobe walls made of earth-tone stucco, aged beams, wood floors, metal gates and custom doors. The place has six bedrooms, a formal living and dining room, library, game room and solarium.

There’s also a basement tunnel system with an elevator that provides maintenance infrastructure to the building. The home has been meticulously maintained to reflect a bygone era of New Mexican grandeur while adhering to the elegant style of a modern buyer.

There are original wood beams and pops of color.  Herschel Mair

“When Allen purchased the home, it was in great shape, but he took it to the next level,” Duran says. “There’s nothing that has been left untouched or uncared for.”

The home is ensconced in lush greenery, which is part of what makes this property so special. The main house features a wisteria-covered outdoor grill area, while the lawn features shady cottonwood trees, desert flora and colorful flowers. In fact, it’s the natural landscape that initially drew O’Keeffe to the property. She spent the last few years of her life in solace here.

“Georgia chose the home as it was near her doctors, but it had some healing qualities for her as well,” Duran says.

Other structures on the property include a theater building, initially constructed in 1937 as the Carriage House and redone in 2015. It has a projector screen, as well as a kitchen, bathroom and extra bedroom. The adobe-style architecture matches the main house, which is just a few steps away.

There’s also a guest cottage, called Lucy’s Cottage, also built in the 1930s, that is used as an administrative space. The purchase of the property also comes with a business license for a conference center and 21 bedrooms of guest quarters that some previous owners rented out to non-profits to use as meeting space. There’s also an entertainment and gathering venue with performance areas and room for up to 80 dinner guests. The property can be split in two if desired.

The back patio  Herschel Mair

One of the hallmarks of this beautiful estate is the greenhouse and botanical garden, which was designed by Ed Mazria. It’s centered on a modern steel-and-glass greenhouse that has a Bodhi tree, a gift from the Dalai Lama when he visited O’Keeffe at the home. The tree is grown from the seed of the tree that the Buddha sat beneath to achieve enlightenment. Allen also introduced many rare plant species to the garden.

“Many eyes have fallen on this property, and when Paul saw it he truly saw the beauty that exists and the peacefulness and tranquility of it,” Duran says.

Check out more photos the property below:

The home was built in the 1930s.  Herschel Mair

Tranquil healing walkways are found throughout the property.  Herschel Mair