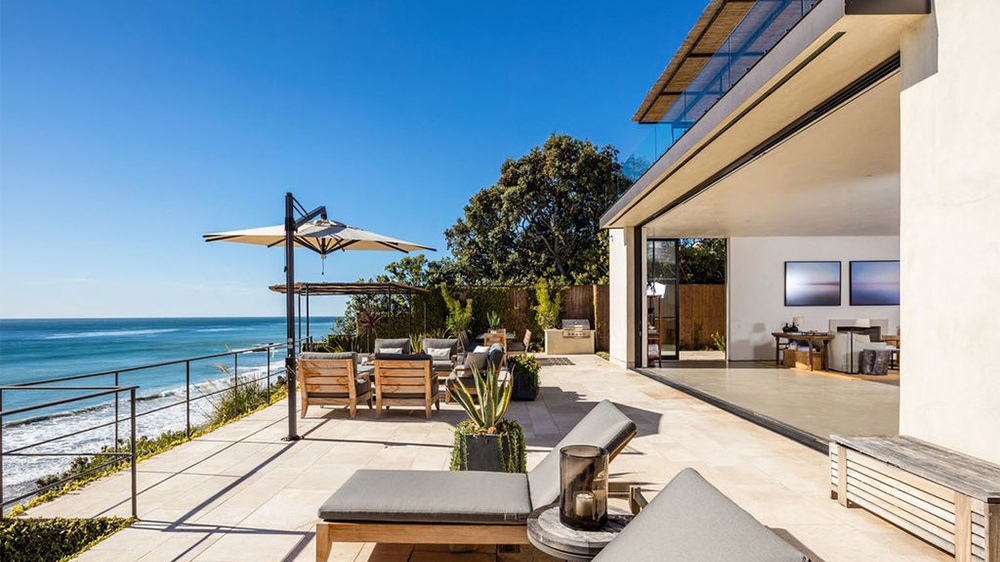 Professional sports superstars Aaron Rodgers and Danica Patrick treated themselves to an early Christmas present this year, quietly closing on a pedigreed Malibu estate just in time for the holidays. Records reveal the all-cash, $28 million transaction went down off-market in November, though the pair actually moved into the property months ago, leasing the house over the summer. For her part, Patrick has already hosted several episodes of her “Pretty Intense” podcast at the estate. (Deeds and documents suggest the house may be solely owned, technically speaking, by Rodgers.)

As it turns out, the property does indeed have a star-studded history. Originally built in 1981, the Mediterranean villa-style compound underwent a significant renovation and expansion in the mid-90s, courtesy of its non-famous attorney owner. It was then sold in 2007 for $5 million to private equity guru J. Blair Frank, who gave the estate another multimillion-dollar remodel before briefly leasing it to Janet Jackson, who sat down with Robin Roberts in the house for her first televised interview following her brother’s 2009 death.

In 2017, Frank sold the property for $19.25 million to Hollywood power couple Ted Sarandos and Nicole Avant, he the mega-wealthy COO of Netflix, she the Beverly Hills-bred daughter of legendary music mogul Clarence Avant.

But just months after buying the mansion, Sarandos and Avant had a real estate change of heart — they paid $34.5 million for the Montecito, Calif. compound of Ellen DeGeneres and flipped their no-longer-wanted Malibu home for $20.25 million, in July 2018, to British pop crooner Robbie Williams and his longtime wife Ayda Field.

Of course, Williams and Field themselves barely had enough time to dip their toes in the freezing Malibu surf before leasing and subsequently selling the property to Rodgers and Patrick for $28 million, an eye-popping $7+ million profit before taxes, realtor fees and closing costs.

According to dated marketing materials, the two-structure Malibu compound is “reminiscent of a modern Italian palazzo” and features a three-story, rigidly symmetrical main house, plus a detached combo guesthouse and garage that together span an additional 1,198 square feet of space. Out front, a massive wooden gate and towering hedge shield the .61-acre property from public view.

Beyond the driveway gate lies a spacious motorcourt abutting the guesthouse/garage. At the side of the structure, a second gate passes into a private courtyard area accented with olive trees, a patio area for sunbathing and a large sparkling pool.

From the patio, a glassy front door opens into the main house, which offers an open-concept floorplan with distinctly contemporary decor. There are cement floors in the high-ceilinged great room, which comprises a gourmet kitchen with top-grade appliances and custom cabinetry, a separate sitting area with fireplace, and a custom dining table set that was custom-built for the residence. The true star of this real estate show, however, is the breathtaking ocean view, which is enhanced by a giant wall of disappearing pocket doors.

Out back, a stone patio atop the bluff offers birds-eye vantage points of the crashing waves far below. Rodgers, Patrick and their guests have two options for beach access: there’s a zig-zagging staircase, or they can choose the estate’s private funicular to carry them down to the sand.

Other home amenities include a media room, a subterranean lounge/games room, three guest bedrooms and a chicly minimalist master suite with a spa-style bathroom and a private ocean view deck.

Then there’s the two-bed guesthouse and garage, which can accommodate three exotic vehicles. If they haven’t already, Malibu residents can expect to soon see Patrick roaring up and down PCH, horn blaring and music blasting.  Asked about road rage, the famously sassy former Indy and NASCAR driver once told FHM magazine “I use my horn more in one day than most people do in their whole lives. If I can make people know they’ve done something wrong on the road, then I’ve helped them. And they won’t be dumb again — they won’t go 65 in the left lane. Some people give to charity, I run ’em off the road.”

And while a $28 million cash home purchase may be unfathomable to most folks, it’s relatively insignificant to Rodgers. It’s certainly no secret that the longtime Green Bay Packers quarterback is among the very wealthiest professional sports stars of all time; in 2013, he inked a record $110 million contract, with an NFL-record $62.5 million guaranteed. Last year, he topped his own record by signing a $134 million contract extension — by the time of his 40th birthday, he’ll potentially have taken home well over $300 million in career salary earnings. And that, of course, doesn’t include endorsements and other highly lucrative side gigs.

As for Patrick, she’s also certainly no slouch on the money front. During her career, she flaunted one of the biggest endorsement portfolios in professional sports, with sponsors including everyone from Coca-Cola to Chevrolet to Nationwide Insurance. Today, the retired driver makes do with a net worth of approximately $60 million, if online reports are to be believed.