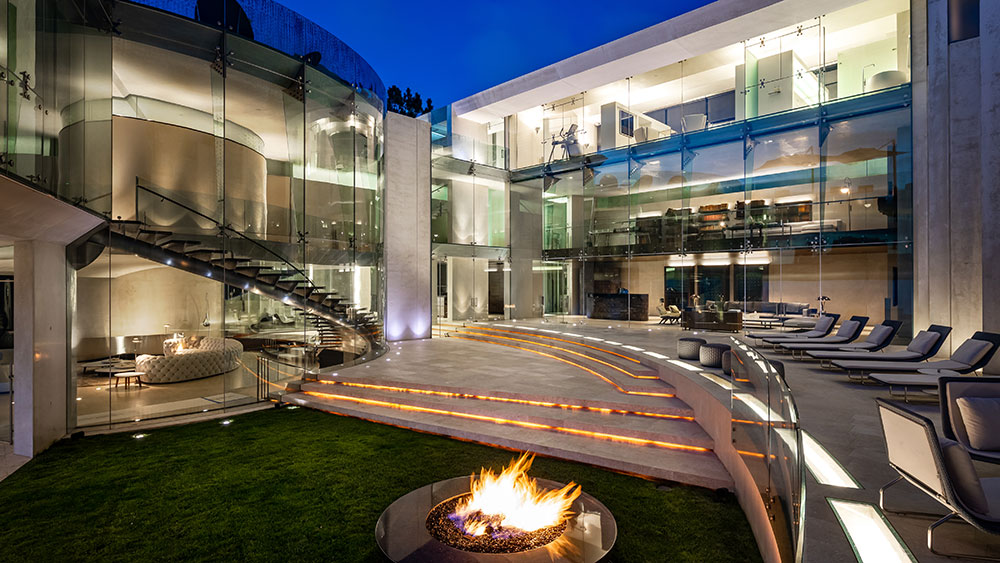 Grammy-winning singer-songwriter Alicia Keys and her music producer husband Kasseem Dean, a.k.a. Swizz Beatz, have just spent $20.8 million to get the keys to the spectacular Southern California architectural masterpiece called the Razor House.

Teetering on cliffs overlooking the crashing Pacific in La Jolla, just north of San Diego, this sleek 10,653-square-foot, concrete-and-glass mansion is said to be the inspiration behind Tony Stark’s Razor Point, Malibu lair in the Iron Man film franchise.

Originally listed in 2008 for an optimistic $39 million, the house came back on the market last year with a $30 million asking price, dropping to $24.99 million and eventually being snapped up by Keys and Dean for $20.8 million.

The closing price makes it the most expensive home in the super-exclusive La Jolla enclave to sell within the last three years.

This one-of-a-kind house is the work of acclaimed San Diego architect Wallace E. Cunningham and took more than six years to construct.

Completed in 2007 for the original owner, Jimmy Cooksey Jr., it was acquired in a 2011 bankruptcy sale by Palm Beach, Florida-based entrepreneur Donald Burns who paid a bargain-basement $14.1 million for the home.

Burns is the former CEO of MagicJack, the company behind the device that plugs into a computer to let users make calls through the Internet. He currently has his 160-foot superyacht Chasseur listed with brokers at Burgess for $33.75 million.

Then there’s the two-story, all-glass great room connected by a curved floating staircase, along with a billiards room/library, a tiered movie theater and well-equipped gym.

The lower-level great room opens up on to a grassed area with a firepit, along with a vanishing-edge, heated infinity pool. Up on the roof level, there’s also a sprawling entertaining area and sundeck offering more breathtaking views of the Pacific.

For guests, or maybe a caretaker, the home comes with a detached, triple-level, 1,300-square-foot guest house with two ensuite bedrooms, with each floor having its own separate entry.

One more spectacular feature of this translucent, ultra-contemporary home is the subterranean garage with space for cars and toys. If the space looks kind of familiar, it was actually used in Iron Man.

While the exterior of Tony Stark’s Malibu house is the work of super-realistic computer-generated graphics, footage of the infamous basement garage where Stark’s Iron Man suit was created, was shot on location at the Razor House.

The house was also used in high-profile photo shoots for Visa’s Black Card and Calvin Klein ads. Aston Martin even used it for the private customer unveiling of the V12 Zagato supercar.

For the East Coast power couple of Keys, who also acts as a coach on the TV talent show The Voice, and Dean, who has produced hits for the likes of Jay-Z, Beyonce and Kanye West, this La Jolla home is their first on the West Coast.

According to our sister magazine Variety, the pair still own a 25,000-square-foot, Georgian-style mega mansion in Englewood, NJ that they bought from funnyman Eddie Murphy for $12.1 million in 2013.