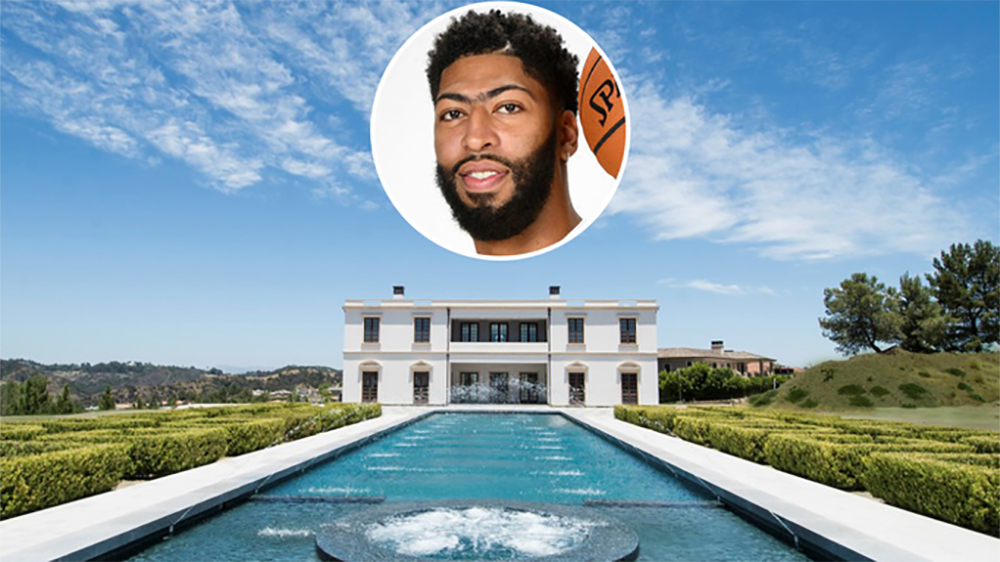 Just a few short months after finalizing a $190 million contract with the Lakers, Anthony Davis has reinvested a substantial chunk of those earnings into a new Los Angeles home. The Real Deal first revealed that the Chicago native forked over an eye-popping sum for a huge estate in Bel Air Crest, a guard-gated community tucked into the mountains about halfway between Bel Air proper and the San Fernando Valley.

Developed in the late ’80s and ’90s, Bel Air Crest consists of roughly 200 homes, most of them hulking Mediterranean-style mansions set behind driveway gates of their own. Due to the enclave’s security features and semi-remote location, celebrities are known to roam the premises—other Bel Air Crest homeowners have included Gordon Ramsay, Kathy Griffin, and Kim Kardashian and Kanye West, who lived in the neighborhood while their Hidden Hills mega-compound was under construction.

As for Davis, his house was never on the market, but records reveal he paid exactly $31 million for the new digs, securing a $20.1 million mortgage in the process. That’s a huge amount of money, of course, and easily the most ever paid for a Bel Air Crest home, but the estate in question is also the largest and most lavish in the entire neighborhood, flaunting approximately 20,000 square feet of living space and set on a 3.5 acre promontory with jetliner views to the Pacific Ocean and Catalina Island.

Property records also show that the 8-bedroom, 9.5-bath house was completed in 2010 and built for the Changs, a local family. In 2016, the perfectly symmetrical structure—it’s perhaps best described as an vaguely International-style, European-influenced chateau fusion take on the White House—was sold for exactly $10 million to Ted Foxman, a retired semiconductor exec-turned-real estate developer. Foxman subsequently spent another fortune on renovations to the giant property; the interiors were extensively redone, as was the landscaping, which now feels far more lush and vibrant than before.

Foxman also indulged his decorative whimsy with the house, adding vibrant pops of color inside, and even parking a vintage Porsche 356, painted a lovely shade of aqua, in the living room. The result of his efforts, led by the guiding hand of L.A.-based interior designer Lonni Paul, was photographed last year for Elle Decor.

Inside, a giant dome tops the double-height foyer, giving the place a solarium feel. Endless public spaces connect to more intimate rooms—there’s a music room for guitar jamming, a games room with a wet bar, wine cellar, movie theater, and much more. But despite its size, the property’s centerpiece is not the mansion itself, but rather the stunning view and that Olympic-worthy pool—all 120 feet of it. Other amenities include a poolside cabana, endless grassy lawns, and a full-size tennis court.

Davis previously owned a sumptuous estate out in Westlake Village, acquired in 2018 for $7.5 million and sold in 2020 at a precipitous, million-dollar loss. As for Foxman, who more than tripled his money on the Bel Air sale to Davis—before taxes and renovation expenses, of course—he’s downsized to a $13.8 million mansion in Encino, complete with a basketball court and 13,000 square feet of living space.

Check out more images of the Bel Air mansion below.