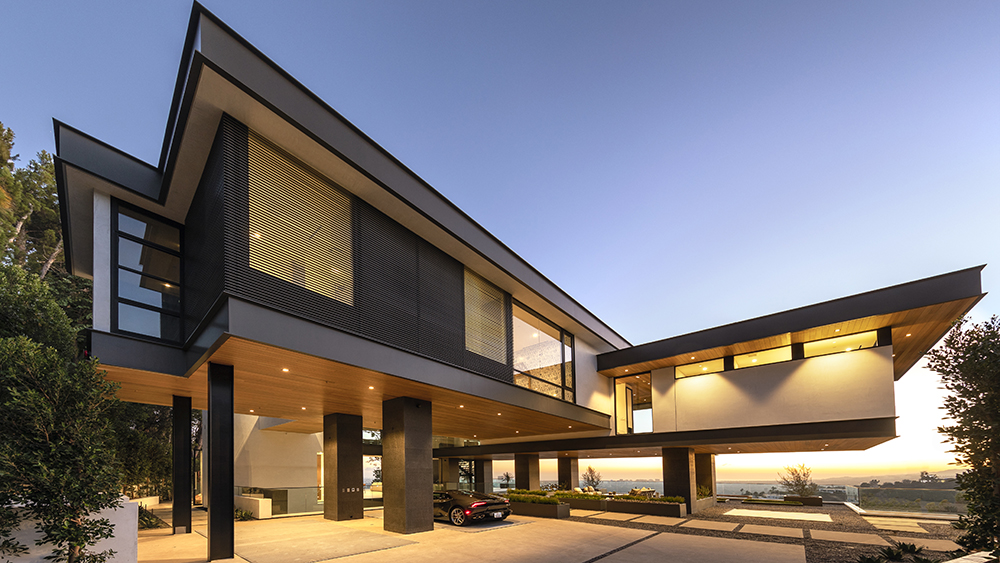 When Jason Rubin, 50, decided to build his dream house in Beverly Hills, he made sure his daily drive home would be as thrilling as anything you’d find in a video game. After turning his matte-gray Lamborghini onto the winding, narrow streets above Sunset Boulevard, he climbs steadily higher to a dead-end, passes through a metal gate, slips into his parking spot and, with the press of a button, descends into a glass-walled underground garage. Game over.

Rubin, a video-game pioneer, VR trailblazer and vice president of special gaming initiatives at Facebook, has built an impressive career on the strength of his imagination. He published his first game, Ski Crazed, while still a teenager. A game he designed in his 20s, Crash Bandicoot, was a king-pin at Sony in the ’90s, peak Play Station era. As his lifestyle changed and expanded over the years, he bought and remodeled homes in both New York and Los Angeles. But the house that he and his wife, Agnes Ambrus, built for their family, which includes two young daughters and three large dogs, is a feat of engineering and pure luxury that exceeds this wild dreamer’s wildest dreams.

“I designed a digital model of what I thought I wanted the house to look like,” says Rubin, who is padding around in his socks, stepping over the occasional dog toy and baby gate. He laughs and shakes his head at his naivete. “But, you know, I have no idea how big a bathroom should be.”

His vision was primarily built around views, the kind this city is famous for. Today, heavy gray clouds pass across the expanse of sky outside the towering walls of windows, but the effect of having all of west Los Angeles to the Pacific Ocean spread out under your feet is no less stunning. To turn this rough concept into a reality, Rubin enlisted architect Paul McClean, based south of LA in Orange. Rubin had admired McClean’s work on other houses in the neighborhood, some of which are equally imposing in size and embody that angular, modern sensibility that is woven into the identity of Southern California.

“Jason had a real 3-D visuality, which some clients don’t have, which made it a really fun collaboration,” says McClean. “Fun” might not be the first word that comes to mind when considering the logistics of constructing a nearly 12,000-square-foot house atop and down the side of a steep canyon. McClean’s challenge was to find a way to build vertically while still maintaining a feeling of openness, allowing for staggering views from every room and creating outdoor lounging and entertaining spaces—even when the house and its accompaniments gobble up every inch of a relatively modest 30,000-square-foot, irregularly shaped lot.

The pool deck, with Holly Hunt chaises, dining table and chairs, and fabrics from Great Outdoors and Perennials.  Simon Berlyn

Making the design puzzle even more intricate: McClean had to work around the existing footprint of the pool and patio. The Rubins had been living on the property in a house that was outdated and not ideal for their growing family, but by the time they hired McClean, they’d already rebuilt the pool and its deck. The house had to go, but the pool needed to stay.

Another obstacle was Rubin’s distaste for garage doors, of all things.

“When you drive up to most houses, the first thing you see is this giant garage, and it’s hard to make that attractive,” says Rubin.

What McClean came up with is a five-bedroom tri-level house with a floating staircase that connects the lower-level gym, media room and guest rooms with the open-plan main level and the top-floor family bedrooms. By installing two elevator platforms, which lower the cars to the garage (visible from the media room), McClean both eliminated an eyesore and created more ground-floor living space. To open up the structure and remove some of its density, he created an open-air “light well” running through the center of the home. The effect is a transparency and airiness that belie its size. That contrast is what McClean is known for.

“It’s shelter, but it’s a little bit tenuous. It’s not enclosure,” McClean says. “A lot of our homes feel that way, including my own. There’s a lightness to it so you can connect to the environment around you and see the sky and nature. I’ve been an architect for 25 years, and we’ve had our firm for 20. All I ever do is modern homes. The last 10 to 15 years we’ve done nothing else. Once you have that experience of living in a home like this, it’s hard to go back and live in a traditional place.”

Steel beams and an infinity-edge pool, even with a retractable cover, might not strike every parent as baby-friendly choices, but McClean says that children appreciate modern houses more than one might think.

“Children learn and learn well. They appreciate the light and the connection to nature. I wish I could have grown up in a house like that,” he says.

There is one important distinction between the Rubins’ house and the other homes of similar size and scale in this neighborhood, and that’s the total absence of what Rubin refers to as “bling.”

“If you were to build or remodel a house around here that you wanted to flip, or sell immediately, you’d have to make it shiny,” he says. “That’s what people around here want. You won’t see any polished chrome or glossy marble in this house, though. We used stone, but it’s honed. I like steel and brushed metal. The floors all had to be dog- and child-friendly, not slippery or easily scratched.”

“We wanted the house to have an industrial aesthetic,” adds McClean. “It needed to be durable and hold up to a little more use. It’s not a designer palace, where every little thing is precious. The floors are a kind of porcelain, chosen for their durability. We did want it to feel warm, not to be too cold. So we picked woods that would bring warmth into the house, tonally.”

Another notable difference is that the mechanisms for many of the house’s more unusual features are on display, such as the glass walls that tilt open to remove the barrier between the indoor and outdoor living spaces, and the hydraulic platforms that deliver Rubin’s cars to the garage. Rubin gestures to a simple industrial-looking panel with a key and lock, a green button and a red button, and the exposed steel rods that lift the heavy glass walls. He likes to see how things work. “I think most people would want to cover this up, but I like the industrial feel to it,” he says.

A view from the kitchen.  Simon Berlyn

When it came time to furnish the home, McClean and Rubin brought on interior designer Michael Fullen, who was briefed that this was a high-traffic house, intended to absorb kindergarten birthday parties, Agnes’s family visiting from her native Hungary and sophisticated entertaining that maximizes that expansive view in the evening. Fullen designed the custom sofas and seating, which are upholstered in high-tech indoor-outdoor fabric, known for being both durable and soft. Finding pieces large enough not to be dwarfed in the cavernous rooms was a test.

“The volume of space was a large consideration in appropriately sizing furniture,” says Fullen, explaining his decision to commission custom pieces from craftspeople across the country. “The dining-room table is nearly 14 feet long, and the top is cut from a single length of black walnut with a concrete inset. The cocktail table in the living room is also from a single tree slice, measuring six feet square.”

Sculptural light fixtures are suspended from the towering ceilings, and recessed dimmable exterior lights make the house appear to glow in the evening or on dark winter days, which do happen in LA on occasion, even in Rubin’s stylized world.

“This is not the day to see this house,” he says, disappointed that the constant drizzle hasn’t broken to offer a glimpse of the sprawling blue sky. He presses a button to raise a thin sun-filtering shade in the master bedroom, revealing a still-magnificent view, this time of the hillside to the northwest. At this altitude, and from these angles, privacy is not an issue for the Rubins.

“We figure if someone wants to go to the trouble of getting their binoculars out and look all the way up here, they must really want to see what goes on in the house,” he says with a shrug. “I guess they’ll just get to peek inside.”