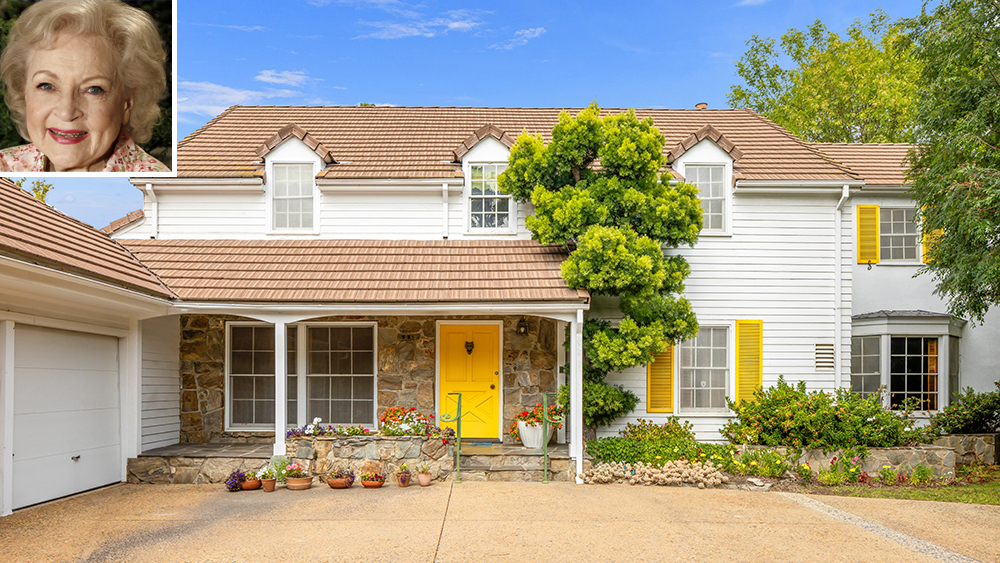 Days after Betty White’s Carmel vacation home sold for well over its $7.9 million asking price, the late actor’s estate has listed another one of her charming California properties for $10.5 million.

Located in LA’s prestigious Brentwood Park, the colonial-style abode sits on nearly three-quarters of an acre and affords prime views of the iconic Getty Museum and nearby mountains. Originally built in 1952, the retro residence was purchased by the beloved Golden Girls star and her late husband Allen Ludden in ’68, just a few years after they married in ’63.

Spanning 3,029 square feet, the five-bedroom, six-bathroom home features an apt all-white façade that is juxtaposed with cheerful yellow accents and terracotta roofing. It offers a host of sweet amenities, too, including a pool, a three-car garage and an idyllic sunroom. To top it off, there’s a guesthouse where the Hollywood power couple played charades with fellow A-listers, such as Dinah Shore, Burt Reynolds and more.

A backyard view of the Brentwood property’s pool and guesthouse.  Barcelo Photography for Sotheby's International Realty

Naturally, the property is gated and sits back from the street to ensure there’s plenty of privacy. The huge, park-like grounds, meanwhile, will be perfect for hosting celebrities and other well-heeled guests.

“Betty White was a California girl through and through,” White’s estate said in a statement. “Despite living in New York when she and Allen Ludden were first married, she longed to be ‘back home’ in Los Angeles where she grew up.”

A distance view of the spacious backyard.  Barcelo Photography for Sotheby's International Realty

White, who was born in Oak Park, Illinois, won five Emmys throughout her prolific 80-year career, starring in The Mary Tyler Moore Show, The Proposal, Lake Placid and countless other hits. She died from a stroke in December 2021 but her memory lives on in this Brentwood home.

The listing is held by Marlene Okulick of Sotheby’s International Realty’s Pacific Palisades Brokerage. According to the firm, this is the first time the property has been on the market in over 50 years. What’s more, it’s being sold for land value. This means the value of the land itself and any improvements that have been made to it are taken into account.