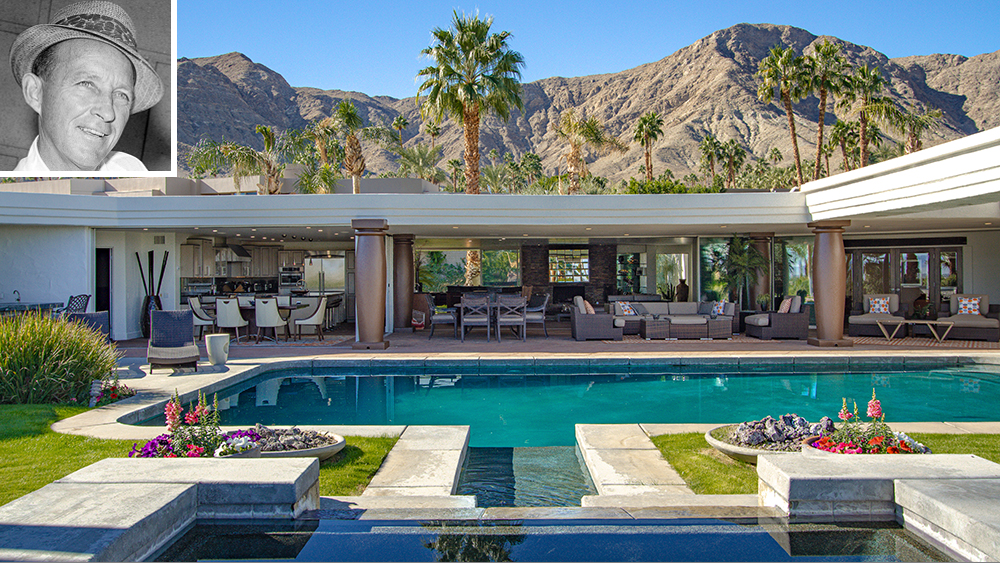 In need of an oasis? Look no further than the late superstar Bing Crosby’s former desert estate in Rancho Mirage, California.

Having been listed on and off the market for over a decade, the midcentury modern home has a new asking price of $4.5 million. Sitting on roughly 1.5 acres in a gated community called Thunderbird Heights, the 6,700 square-foot home was built by the “White Christmas” singer in the 1950s. It includes five bedrooms, a home theater, a double-oven kitchen, an outdoor patio and jaw-dropping views of the Coachella Valley. Of course, the desert utopia also comes with its own pool, spa, putting green and an entire guest wing (with two bedrooms) for when company comes to stay.

The front yard of the home.  Kristofer Magenheim

The current owner, Robert Teller, first listed the property for $3.495 million in 2010. David Emerson and Alexandra Trejo of Compass now share the listing, and believe the strong local real-estate market will pull in attractive offers, according to The Wall Street Journal. For context, the median sale price in Rancho Mirage was up 32.4% in the third quarter of this year compared to the same period in 2021, according to data from Miller Samuel Real Estate Appraisers & Consultants. “Our market is on fire,” Emerson tells the WSJ. “We’ve been in double-digit increases annually for the past several years.”

Back in 2005, Teller, a former ice cream industry entrepreneur and a real estate investor, bought the house for $2.625 million. According to reports, he said he bought it because his late wife, who was battling cancer at the time, wanted a home in the desert. The businessman was also drawn to the estate himself, as he shared an appreciation for Crosby with his father growing up. When his wife passed, Teller began listing the property—having found that he’s not as big a fan of the desert as his is of the entertainer.

Harry Lillis “Bing” Crosby Jr. is one of the most popular entertainers of all time, known for both his singing and acting success from 1926 to 1977. In 1931, he launched his first radio show, and later went on to host the hugely popular “The Bing Crosby Show for Chesterfield” on CBS Radio. The actor starred in over 70 motion pictures including classics like “Road to Bali” and “High Society.” He went on to become an Oscar and Grammy award-winner before his death.

For more information on Crosby’s Rancho Mirage estate, head over to Compass.com. Check out more images of the property below.

Views from the kitchen.  Kristofer Magenheim

One of the bedrooms.  Kristofer Magenheim

The pool at night.  Kristofer Magenheim