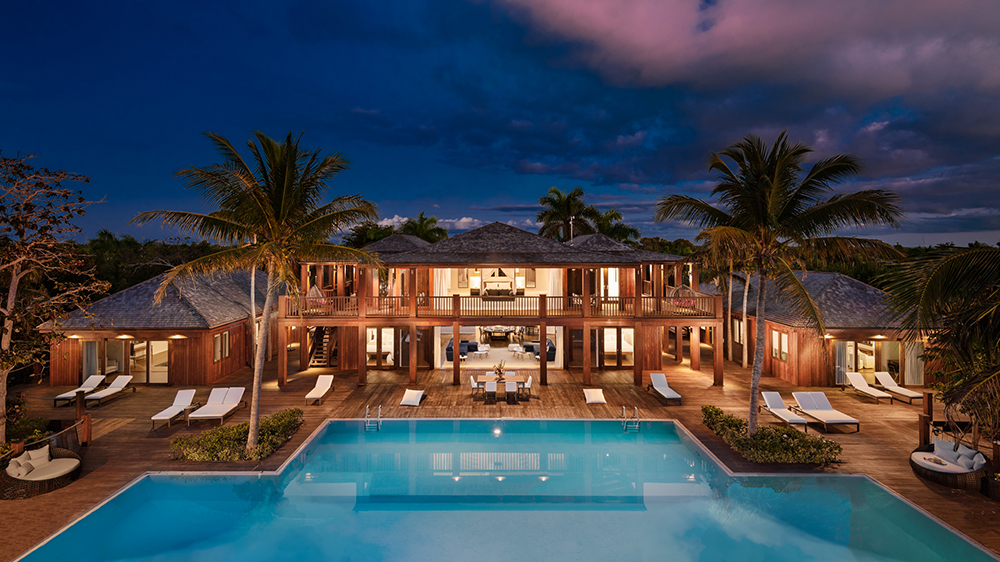 Celebrity hangouts don’t come much more paparazzi-proof than Parrot Cay. To get to this tiny sliver of paradise nestled in the Turks and Caicos archipelago requires an hour-and-40-minute flight from Miami and a 35-minute rocky-rolly boat ride.

Once there only a handful of super-luxury homes are hidden away among swaying palm trees along a mile-long, sugar-sand beach.

The sunset-facing compound, known as the Residence, is set in the protected Rocky Point Bay.  It comprises an 11,000square-foot, two-level main house and two separate, three-bedroom guest villas overlooking Windex-blue water and 1,000 feet of secluded beach.

The main house defines the word “spacious,” with its five airy bedrooms. The master suite takes up the entire second floor. Huge glass doors open from the master onto wrap-around terraces that span 2,000 feet.

The expansive grounds, shaded by coconut, banana and papaya trees, are designed for having fun in the sun. They feature 17,000 square feet of decking, four pools and a shaded oceanfront yoga pavilion. To entertain the kids, there’s a well-equipped playground with its own, full-size wooden pirate ship.

The estate itself is part of the exclusive COMO Parrot Cay resort, owned by Singaporean hotelier Christina Ong. It features a main building with two restaurants – yes, they deliver – tennis courts, an acclaimed wellness center, gym and beach club.

Listing agent Nina Siegenthaler, of Turks and Caicos Sotheby’s International Realty, says that if the Willis estate sells for the $33 million asking price, it would be the highest price ever reached on the island. The current record is for a Parrot Cay home that sold for $27.5 million in 2016, down from its original $48 million sticker.

If $33 million is a little out of your price range, you could always rent one of the home’s three-bed guest villas through COMO Parrot Cay. Nightly rates run from $795 to $1,500.

Hopefully the actor will have better luck selling his properties than he has in the past. His $15 million, 23-acre ranch in Idaho languished on the market for seven years before he offloaded it last October for $5.5 million.

This past January, Willis listed his sprawling mansion in Bedford Corners, New York for $13 million. It’s currently priced at $9.5 million.