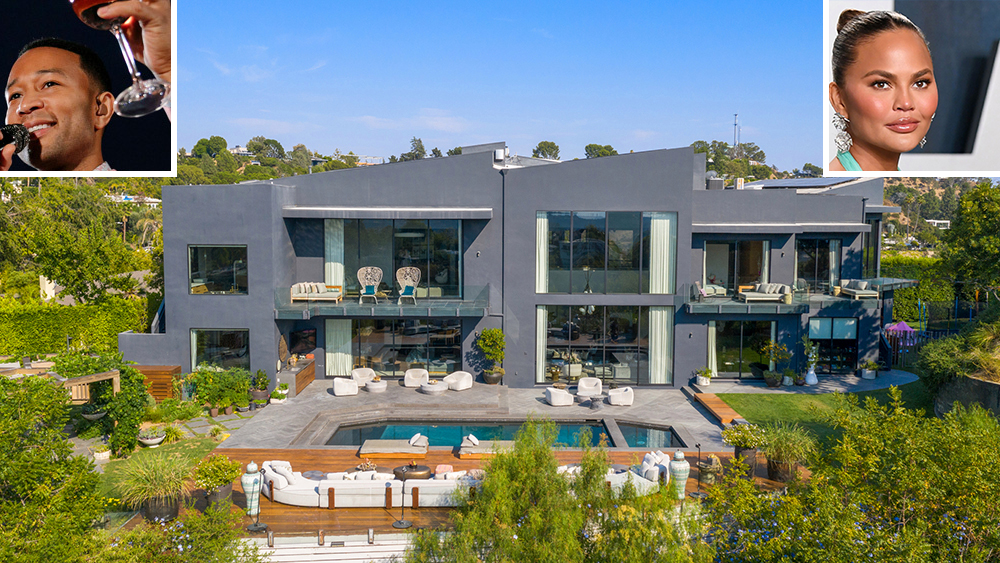 You may already recognize this house from Chrissy Teigen’s social media posts and her cooking demos. But you might not have seen the entire spectacular eight-bedroom, nine-bath home. The place is nothing short of a design masterpiece, with only the best finishes and incredible attention to detail. This all makes sense, considering it’s owned by such stylish stars: Teigen and her musician husband, John Legend.

The property was originally developed in 1966, but that first house is long gone, replaced by a more contemporary structure built by a developer before Rihanna purchased the estate. When Legend and Teigen took it over in 2016, they redid every bit of the interior with the help of designer Don Stewart, never cutting corners and always opting for top-of-the-line finishes. Take the solid brass doors to the dining room, which echo the stunning brass surrounds used on the fireplaces in the living room and the primary bedroom suite. Then there’s the teak ceiling they imported from Thailand and the marble Teuco soaking tub brought in from Italy.

When the couple originally put the house up for sale last fall—they needed a home with more space for their growing family—it was listed for $23.95 million. They’ve since dropped the price to $17.95 million. Now, says broker Marshall Peck with Douglas Elliman, “This is the best deal in Beverly Hills. The finishes are just mind-blowing. And people are also blown away by the ceiling heights—33 feet in the living room—and 22 feet high in the master bedroom on the second floor. That’s just unheard of.”

The kitchen, naturally, is a showpiece, as it served as Teigen’s studio, with its blond wood cabinetry and unique waterfall-style marble countertops (a design mimicked for the vanity countertops in the primary suite’s bathroom). The oak floors were given a ceruse treatment (essentially a lime wash that brings out the wood’s grain). The cinema room has an incredible sound system and projector, and its cozy style will make you want to stay for a double feature. A home gym, a safe room and a massive playroom with ocean views round out some of the other special spaces within the house, each lovingly designed.

But perhaps the most special space of all is the primary bedroom suite, with pocket doors that open wide to a private balcony that looks over the pool as well as Coldwater Canyon, all the way to downtown Los Angeles. “The view of the sunset from the master and from the living room at night is just magical,” says Peck. While the bedroom feels like a serene but stylish oasis—that fireplace!—its extra rooms really put it over the top in a good way. The “glam room” is perfect for hair and makeup to get camera ready, and a lovely place to relax in the massage chair. The bathroom has that incredible black marble tub with a view as well as a spacious double shower. But the piece de resistance within this suite are the substantial dual closets with their glass doors and lit display shelves. They look better than those in a Rodeo Drive boutique and, according to Peck, they took many months to get just right.

The outdoors got a similarly luxe treatment. The couple spared no expense in building the heated saltwater pool, hot tub and wood deck, as well as an outdoor kitchen with a stunning shaded pavilion draped with grapevines. “It feels like you’re in Napa Valley” when you’re out there, says Peck. Lush plantings add to the feeling of a sanctuary. Located at the end of a lane, gated with security, the entire 0.84-acre estate feels private and far from the bustle of LA and the commercial district of Beverly Hills, though it’s just minutes away.