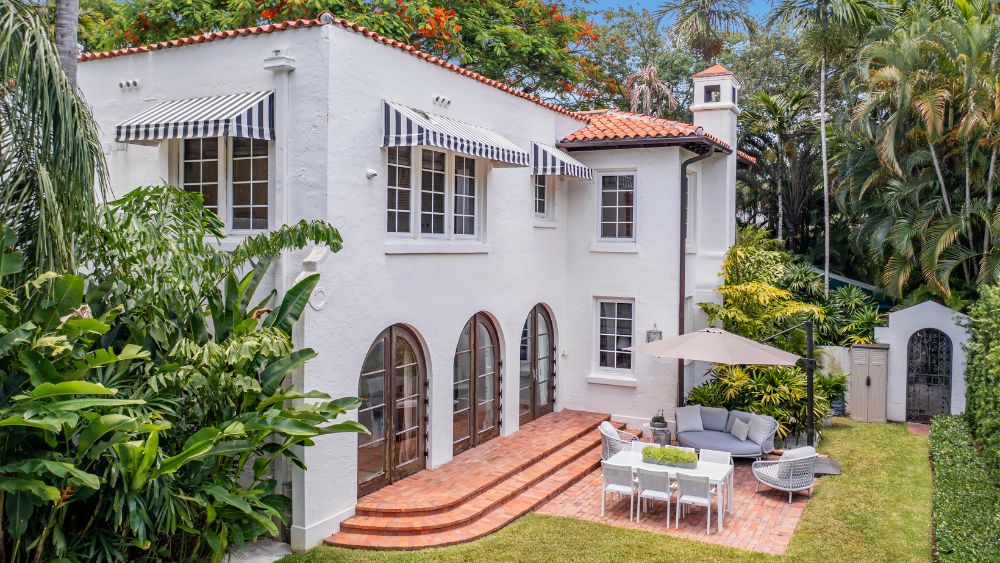 Christian Slater is moving on from Miami. The actor-producer has listed his stylish villa in The Magic City for $3.95 million.

Located in the affluent area of Coconut Grove, the Italian-inspired property was purchased by Mr. Robot himself in 2013 for $2.21 million, according to Architectural Digest. The two-story villa includes four bedrooms, three-and-a-half bathrooms and a detached guest suite. Compass, which has the listing, notes that the home was originally built in 1928 and was renovated in 2003.

A formal dining room opens up to the outdoor patio.  1oak Studios

The first floor of the main house holds a newly remodeled kitchen with SubZero, Viking, and Miele appliances, a living area complete with a fireplace and den, in addition to a dining area with French doors that opens directly to the outdoor pool. You’ll also find a large pantry, half-bathroom, entertainment area and dining nook on the floor.

The second floor comprises three bedrooms and two bathrooms. The coveted master suite features a Juliet balcony, a sizable walk-in closet, an ensuite bathroom with marble tiling and a separate shower and soaking tub. Upping the ante is a rooftop terrace off the master, a dreamy outdoor space that overlooks the pool and comes with its own seating area.

A private rooftop terrace off the second-floor master suite.

Adjacent to the main house is a secondary dwelling for guests. The detached guest house has its own bedroom and a full bathroom that’s outfitted with a steam shower. There’s also a dedicated area for entertaining friends and family.

Smartly, the home has been fortified for hurricane season: There’s a generator on-site and the property is protected by impact-resistant windows and a brand-new retaining wall on the east side.

So, why is Slater saying goodbye to the Sunshine State? The actor will now reportedly split his time between New York and Los Angeles for upcoming projects.

Liz Hogan and Charles Celesia of Compass are the listing agents.

Check out more images of the Coconut Grove home below.