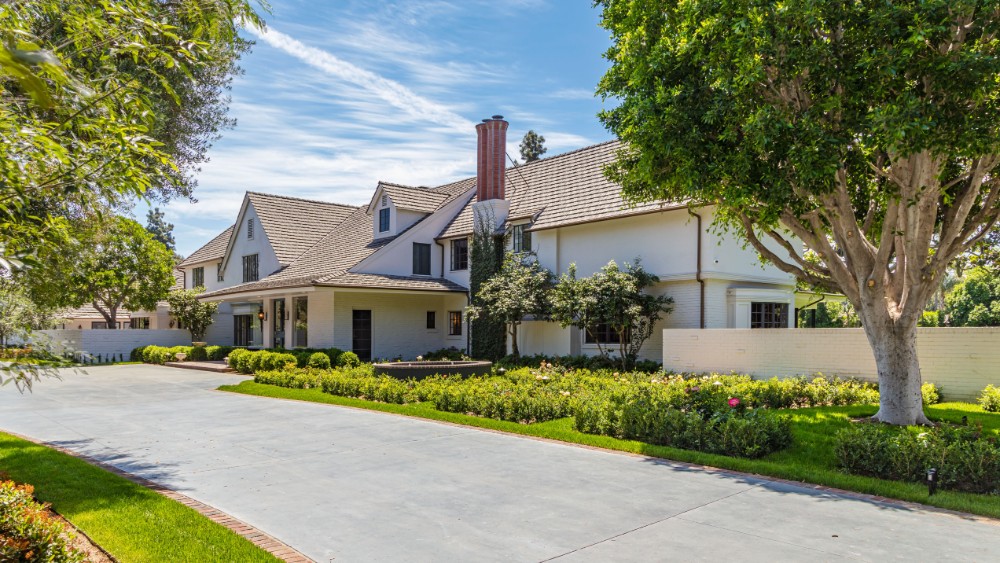 British-American comedian and actor Bob Hope, who passed away in 2003 at the age of 100, had an illustrious and dynamic career in entertainment. What many don’t know, however, is he also had an impressive real estate portfolio.

One of his iconic homes at 10346 Moorpark in Toluca Lake is now being listed for $29 million. The home was built in 1939 for Hope and his wife, Dolores, who owned the home for the majority of their lives. Dolores held on to the home until her death in 2011 at the age of 102. The most recent owner and current seller is billionaire philanthropist and investor Ron Burkle, who bought the property for $15 million in 2018, and whose goal wasn’t to demolish the home, but to restore and preserve it.

He is selling it now, and many hope that the future buyer retains this legacy Los Angeles estate. It was originally designed in English Traditional style by architect Robert Finkelhor, but in the mid-1950s, the Hopes enlisted John Elgin Woolf, the father of Hollywood Regency Style, to update the home with a more contemporary style. Except for a few modernizations made for today’s buyer, like updated fixtures and high-end finishes, the home’s character remains. This includes Hope’s oak library and a one-hole golf course he designed himself.

The property has seen some iconic moments, like when President Nixon landed Marine One on the back lawn so he could play a round of golf at the nearby Lakeside Golf Club.“Bob Hope to this day is the most iconic resident Toluca Lake has ever had,” says listing agent Kevin Dees of the Agency. “My favorite feature of the property is the legendary par-3 golf hole that Mr. Hope designed himself. The Toluca Lake property was the Hope family’s primary residence for decades. Countless dignitaries from around the world including United States presidents have visited the estate. I believe this property stands firmly at the top of Mr. Hope’s legacy.”

The property spans just over five acres and features a main six-bedroom home (including two staff bedrooms), as well as a two-bedroom apartment. In total, there are 10 bedrooms and 17 bathrooms. The home was certainly ahead of its time, with walls of glass that overlook the lush grounds, an open-plan living area with a stone fireplace and private outdoor terraces ideal for entertaining or simply retreating from the craziness of life.

The estate also features a home theater, gym, steam room and infrared sauna, as well as Hope’s original office that was the core of Hope Enterprises’ operations for the duration of the couple’s time at the estate. It was from here that Hope ran his lucrative businesses and production work. To top is off, there’s also a four-car garage, motor court, extensive security and three electric entrances.

Burkle enlisted Art Luna’s landscape design prowess to transform the property’s beautiful grounds. Outdoor amenities include a saltwater pool, tennis court, barbecue kitchen and lounge space. There are few more iconic homes in which to enjoy a quieter side of the Los Angeles lifestyle—and few homes you could own in which an entertaining icon relaxed and raised his family.

Burkle updated the home to include high-end finishes.  Simon Berlyn

A lounge area that connects to the outdoors  Simon Berlyn

Another view of the pool  Simon Berlyn