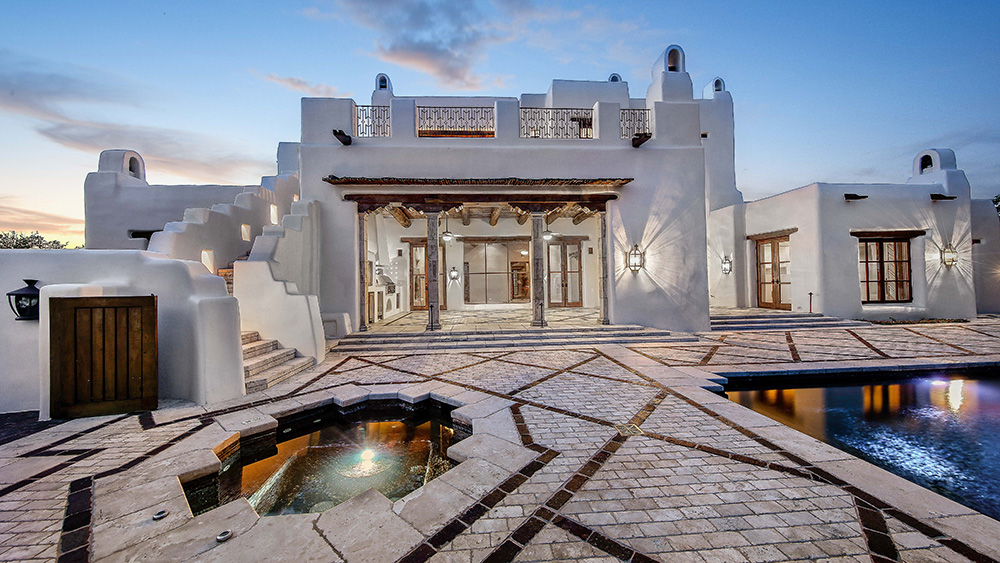 Country crooner George Strait may have sung about all his exes living in Texas, but he can now also claim that some of those exes are homes. Most beloved among them is his newly listed San Antonio mansion, for which he and his wife, Norma, commissioned one of the Southwest’s most artistic architects to build. The 7,925-square-foot house sits on a hilltop surrounded by 12 very private acres and is priced at $7.5 million.

Strait’s daughter-in-law, Tamara, has the listing and speaks eloquently about the property, which she visited many times since marrying Bubba Strait: “I love this house. When we first met they were still living there, but over time it was special to see Bubba’s old bedroom become our son Harvey’s bedroom.”

While the home is part of the gated community of the Dominion Country Club—membership includes access to the golf course, tennis courts, pool, fitness facilities and restaurant—it’s also very much a scenic oasis with special handmade touches throughout the property, such as 14 hand-sculpted fireplaces, a copper-topped bar, custom tiles and sconces and even custom carved refrigerator doors. These artistic touches were the collaborative brainchildren of the Straits and the late artist and architect Bill Tull.

The hand-plastered and hand-painted exterior is all-new.  Photo: TopTenRealEstateDeals.com

According to TopTenRealEstateDeals.com, the Straits bought the land in the mid-1990s. Tull moved his entire crew from Arizona to San Antonio for the two years it took to build the home, beginning in 1995, with the then-14-year-old Bubba laying the first adobe brick. “Norma told me they interviewed many architects but when they first met with Bill, they knew,” Tamara Strait tells Robb Report. “He had a vision unlike the others. She said when he came to walk the property for the first time he could already see which part of the home would go where. And that vision remained true.” It included three bedrooms and six baths in the main residence with a detached casita that has another bedroom and bath, plus living room, kitchenette and one of those magnificent fireplaces.

Inside the main home, the formal dining room, breakfast room and living room flow out onto the outdoor entertaining spaces seamlessly, perfect for hosting a grand party with live music. A separate bar area has a copper counter designed by Tull and some intentionally exposed adobe wall instead of the hand-plastered wall found in most of the house. Just around the corner from the bar is the home office. Flooring throughout is either poured concrete or long-leaf yellow pine. The spacious chef’s kitchen has tiled countertops, again designed by Tull, with a full suite of top-notch appliances that include double Sub-Zero fridges. Those doors were given an intricate and unusual, hand-drawn copper design treatment that was finished in silver. The wine cellar is just off the kitchen and down a few steps. The original sketches for Tull’s designs are all signed by him and remain with the house.

The pavers were reclaimed from a dug-up road.  Photo: TopTenRealEstateDeals.com

The Straits appreciated privacy and security—not only are there three gates (the first one guarded) to pass through before you get to the property, but there is also a walk-in safe in the mansion. “You can put your guns in there,” says Tamara, “because we do that down here in Texas, but also your jewelry and other valuables.” Other special rooms include a home gym with a private sauna.

Second stories are unusual in adobe homes because of the massive weight involved in the construction of such walls, but this home has an upper level devoted exclusively to the primary bedroom suite. In addition to the bedroom, there are two entirely separate bathrooms and walk-in closets. And the soaking tub in Norma’s bathroom might have the best view in the house: You can see clear to downtown San Antonio. To her chagrin over the years however, George’s closet was the bigger one (a design mistake during construction), but she didn’t want to give up her view. More evidence of Tull’s artistry can be found up here in the custom stained-glass windows.

The outdoor spaces are no less spectacular, with the four-car garage including more exposed adobe and custom lighting on the exterior. The pavers used for the driveway, motor court and back patio were reclaimed from a dug-up road. After a hailstorm a few years ago, the entire exterior got a makeover, including a new roof, windows and re-plastering by hand and a paint job.

The covered terrace includes another sculpted fireplace, an outdoor kitchen with grill, fridge, icemaker and more, but the centerpiece is the infinity-edge pool with glass tiles, which was completed at the end of last year.

There are 14 hand-sculpted fireplaces on the property.  Saguaro ribs are used for the shutters and ceiling.  Photo: TopTenRealEstateDeals.com

Tamara says the Straits are selling because they wanted to be even further from the city, but “they still love that house. If Bill Tull weren’t deceased, I’m sure they would have engaged him again for a new home.”

You can take a video tour of the space here, and check out more photos of the mansion below:

The kitchen includes some of the architect’s special artistic touches, including the custom tiles.  Photo: TopTenRealEstateDeals.com

The dining area opens to the living room  Photo: TopTenRealEstateDeals.com

The stairs up to the primary suite  Photo: TopTenRealEstateDeals.com

One of the home’s seven bathrooms, which includes a custom stained-glass window  Photo: TopTenRealEstateDeals.com

The mansion sits on a 12-acre hilltop parcel.  Photo: TopTenRealEstateDeals.com