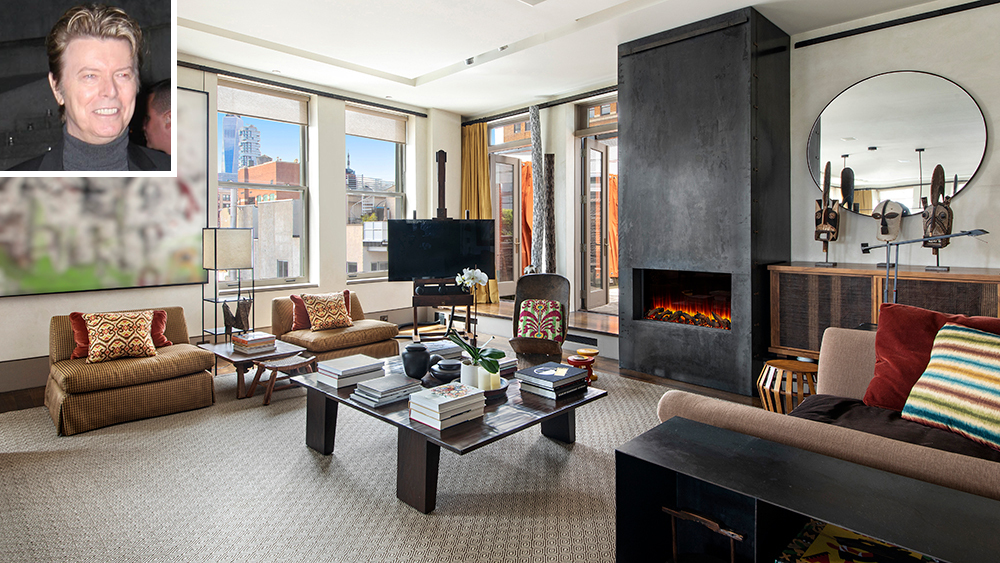 Ground Control to Major Tom: rock star David Bowie’s longtime New York City digs have sold. The revered singer-songwriter originally purchased the Nolita condo for $3.8 million in 1999; it was most recently for sale for $16.8 million. For fans of Bowie, the listing presented a rare opportunity, as it was the first time that the unit had been on the market since his death in 2016.

The 5,000-square-foot residence is located at 285 Lafayette Street, a spot that over the years has drawn celebrity buyers like Courtney Love and Saul Rubinek. The 30-unit building dates back to 1885, when it was the site of a Hawley & Hoops candy factory. It’s been thoroughly reimagined since, with amenities including an expansive rooftop deck and garden.

Bowie had a soft spot for the neighborhood, where, according to the book Forever Stardust: David Bowie Across the Universe, he “felt at home, semi-anonymous, among New Yorkers too cool to act star-struck at celebrity sightings.” The property was listed for sale by a trust linked to the estate, per the Wall Street Journal.

But the residence has more going for it than just star power. In addition to its indoor areas, there are three outdoor terraces where friends and family can enjoy dining al fresco; these balcony spaces are 1,000 square feet altogether. There are four bedrooms and four-and-a-half bathrooms in the unit, plus a library or home office for the WFH set. The primary bedroom is 1,000 square feet all on its own, and includes a fireplace, dressing room and private outdoor lounge.

The library.  Photo: MW Studio/Michael Weinstein for The Corcoran Group

Other Bowie properties include an apartment at the JW Marriott Essex House by Central Park, which sold earlier this year, and his famous estate on the island of Mustique in the Caribbean, which you can rent for about $57,000 per week. The Nolita home is on the seventh floor, so the buyer will have great views of downtown—just a slight step down from the “far above the moon” vantage point Bowie so famously crooned about.

Stuart Moss of the Corcoran Group was the listing agent for the condo.