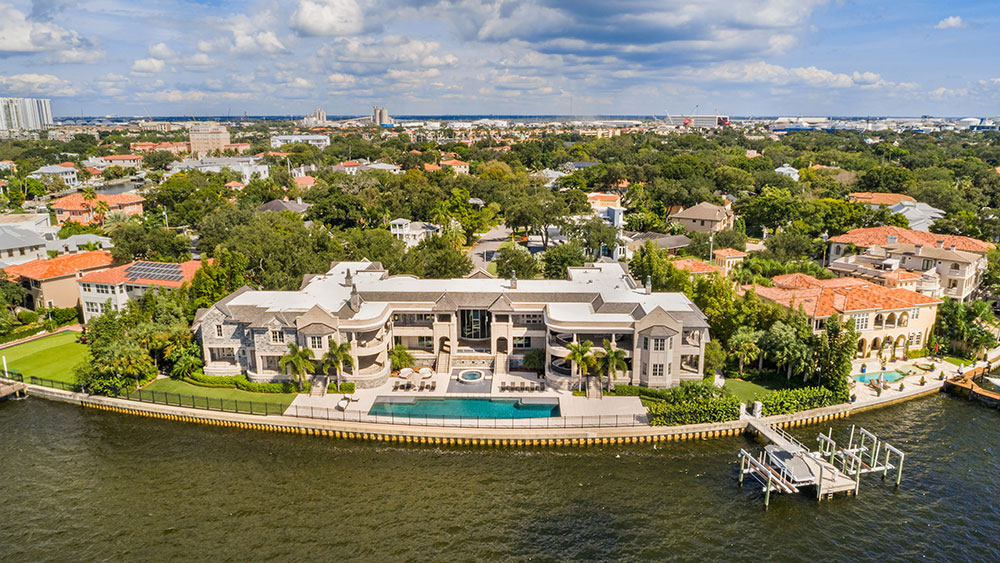 There’s no eviction notice yet, but if baseball legend Derek Jeter finds a buyer for his sprawling waterfront mansion in Tampa, Fla. any time soon, his tenants may be rushing to find new digs.

Which is slightly awkward when your renters are Tom Brady and his supermodel wife, Gisele Bündchen.

The Bradys moved into Jeter’s almost 22,000-square-foot estate in April, after the former New England Patriots star inked a two-year, $50-million deal to play quarterback with the Tampa Bay Buccaneers.

The good news is that the “For Sale” signs going up in the front yard won’t be a too much of a shock to the renters.

And no, the Bradys haven’t shown any interest in buying the compound, which according to Gay, is “the most impressive home to ever hit the market in the Tampa Bay area.”

Jeter’s company Kered Connors LLC reportedly paid a total of $7.7 million to acquire three adjoining waterfront lots on Tampa’s Davis Islands between 2005 and 2006. The roughly 1.3-mile, man-made island is minutes from downtown Tampa and is one of the city’s prime residential neighborhoods.

Jeter spent four years constructing the huge, custom-built home on the 1.25-acre lot—by far the biggest on Davis Islands—completing the project in 2011.

“The attention to detail, the quality of the finishes, the materials used in the construction are just exceptional. Really, no expense was spared in building this home,” says Gay.

The construction wasn’t without its controversy. Jeter fought for, and won, permission to build an eight-foot privacy fence around the property—six-feet is the norm—earning it the nickname among locals as “The Great Wall of Jeter.”

Directly off the “grand salon” foyer is the expansive clubroom with its full-service bar, billiards table and multiple TVs. The room’s glass corner wall slides open and leads out on to the huge, 9,000-square-foot, made-for-entertaining waterfront patio with its 80-foot, saltwater lap pool and large outdoor kitchen.

Upstairs, the master suite features a spa-like bath with a truly enormous steam shower, dual walk-in custom closets and a bedroom complete with fireplace and balcony with views over the water.

Other special features of the home include a wine cellar, a wood-paneled office, movie theater and a professional-grade gym (naturally), plus a guest suite and au pair wing. Outside, two air-conditioned garages can accommodate up to six cars.

According to Gay, one of the estate’s selling points is its 345 feet of open bay frontage, a rarity, along with a deep-water dock and two boat lifts.

One of the reasons the Bradys might not be stepping up to buy the property is that proximity to the water. Shortly after moving in, Brady told Howard Stern on Sirius XM that he was not happy at the number of boaters constantly circling around outside, hoping to catch a glimpse of the power couple.

The Bradys put their former Massachusetts home on the market in 2019.

As for Jeter and his wife Hannah, home is currently a 19-floor 5,200-square-foot palace-in-the-sky at the new Grove at Grand Bay skyscraper in Miami. The couple moved there following Jeter’s purchase of the Miami Marlins Major League Baseball team in 2017. He’s currently CEO and co-owner.

As for the Tampa home, Stephen Gay says there’s already been considerable interest. “We’ve had a ton of calls, but I suspect many are fans of the Bradys who just want to get a look inside.”

The pool deck and bay beyond.  Photo: Uneek Image