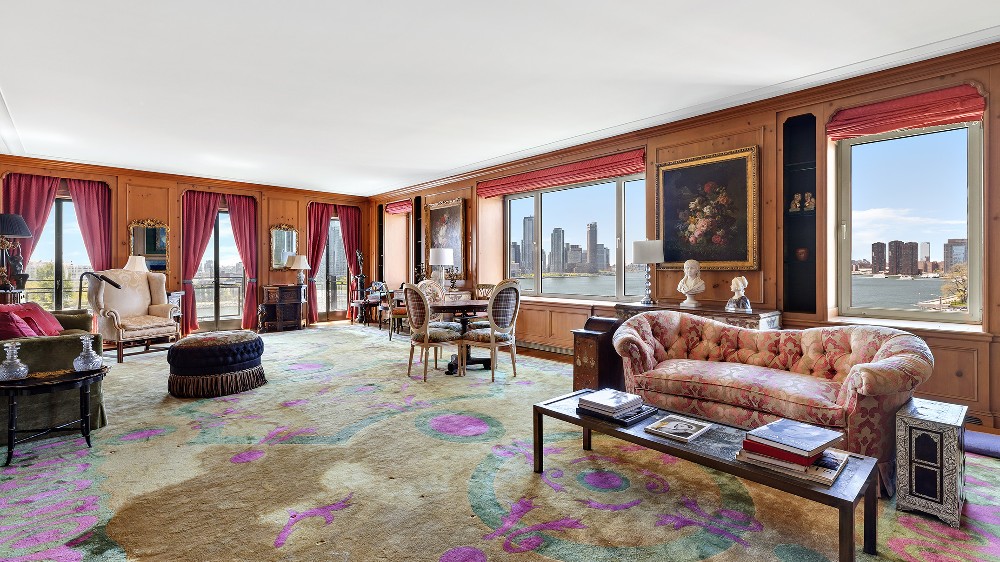 Consider it your very own Grand Hotel. The former New York City residence of the late Swedish-American actress Greta Garbo is once again up for sale. Housed in a co-op called the Campanile, located on 450 East 52nd Street, the residence retains many retro features from when Garbo lived there. She first purchased the place in 1954 and called it home until her death in 1990.

The actress, who was known for films in the 1920s and 1930s, including Grand Hotel, Camille and more, used the home as her primary residence, and her niece, Gray, later inherited the apartment. Garbo attracted many buyers to the building and even drove up the price of units. The star was initially attracted to the residence for the views of the East River, as the water and boats reminded her of her hometown of Stockholm. The three-bedroom, three-bathroom home has views of the river in nearly each room, whether the grand living room or the bedrooms.

The residence features a private elevator lobby that opens into a formal gallery and continues into an L-shaped, wood-paneled living room with immaculate river views. Everything from the sumptuous carpeting to the drapery feels exceptionally elegant. The living room was supposedly Garbo’s favorite room in the home, and it’s the ideal spot for future owners to enjoy the views and relaxing in front of the beautiful gas fireplace. There is also a balcony off the French doors that overlooks the East River, and a library.

While the 2,900-square-foot residence has been modernly updated, there are several remaining features that tell the story of a bygone era, including the Fortuny silk headboard and walls in the primary suite that Garbo installed. Her favorite rose-colored silk was used as her headboard while she lived there and is a beautiful, timeless element still today. The former owners also updated the home with Scandinavian-inspired elements, a nod to Garbo’s heritage, including a formal dining room with plenty of natural light.

“Garbo is forever a legend,” says co-listing agent Brian K. Lewis of Compass. “Her stunning former home is upgraded and perfectly suited for today’s lucky buyer — yet it still enjoys the wonderful essence of Garbo. Dramatic views, a larger-than-life scale and smartly elegant finishes make this a world class opportunity to own a legendary home.”

Other vestiges of Garbo’s legacy include colorful rugs she designed, one of which is located in a bedroom with double beds. There are also built-in shelves that she installed when she lived in the residence. The modern updates, meanwhile, include a renovated kitchen, dining room, bathrooms and a new HVAC system.

“The home has the grace, grandeur and glamour that defined Garbo,” says co-listing agent Will Kerr of Corcoran. “And while her legacy is an important part of the home’s history, it’s cinematic water and city views also make it truly special. Perfectly perched above the East River, when you are in the home, you feel like the captain of a ship. Every room benefits from a different perspective of the water, and these spectacular views give it a unique energy. That is what drew Garbo to the home, was important to the current owners and will surely amaze its next stewards.”

The chic space has been tastefully decorated and restored and offers a once-in-a-lifetime opportunity to own a home from a renowned Hollywood legend.

The gas fireplace in the living room  DDreps

Views over the East River  DDreps

Another view of the living room.  DDreps