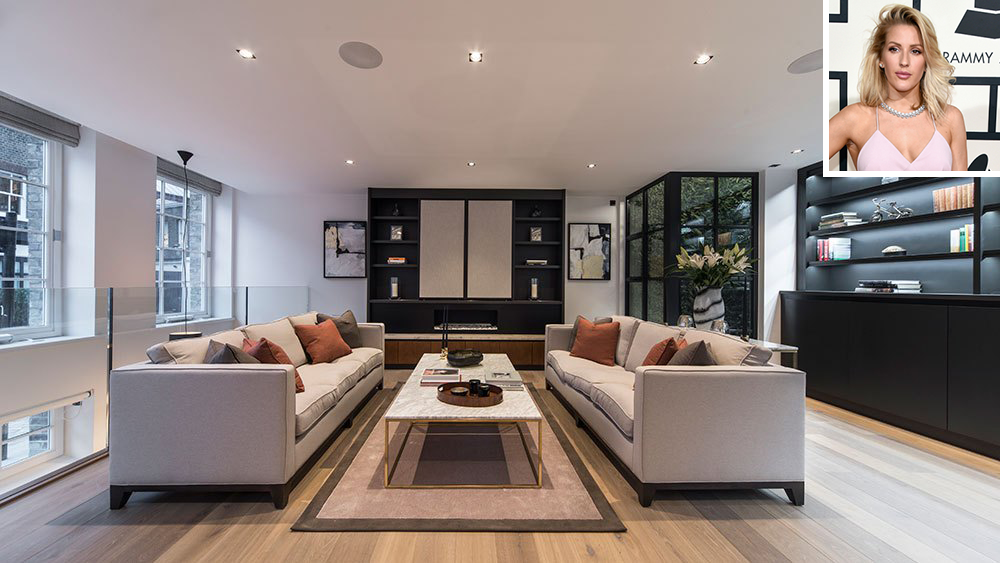 British singer-songwriter Ellie Goulding is hoping to lock in a sale of her historic London mews house, once home to the city’s most famous locksmith.

Tucked away on Oldbury Place, a cobbled side street in London’s bustling Marylebone neighborhood, the five-story townhouse was once part of The Bramah Lock Company’s workshops.

Founded in 1784 by Joseph Bramah, the company famously challenged anyone who could pick their patented Bramah Precision lock with a prize of 200 guineas—a small fortune at the time.

The challenge stood for more than 67 years until American locksmith Alfred Hobbs succeeded, but only after 51 hours of trying, spread over 16 days.

The kitchen with its Gaggenau appliances.  Photo: Courtesy Aston Chase

Even if she gets her £5.95 million asking—around $7.7 million in today’s currency values—she’ll be in the red profit-wise.

A cool feature of the room is its frameless, low wall of glass that overlooks the lower-ground level with its kitchen and dining room.

A black metal staircase leads down to the kitchen with its sleek, simple design and suite of high-end Gaggenau appliances. Close by is a dining area and casual, TV-watching space.

In the depths of the basement are two guest bedrooms with a shared bathroom and small utility room. With little natural light, they’re definitely not spaces for the claustrophobic.

The metal touches like this staircase give the home its industrial loft feel.  Photo: Courtesy Aston Chase

Back up the stairs—there’s no elevator—and the second floor is home to the primary bedroom; at 16-feet-by-11 it is far from grand, but it is in line with many other London offerings. Closet space is also on the tight side. That said, new owners could convert the second, smaller bedroom on this level into a roomy walk-in dressing room.

Climb the stairs again up to the third-floor level, and the full-floor bedroom here is arguably the most fun, being set beneath the pitched roof with big, opening skylights.

No doubt much of the home’s appeal is its impressive location in one of London’s hippest areas. A five-minute stroll takes you to André Balazs’ ultra-hip Chiltern Firehouse hotel and eatery – Balazs also owns LA’s Chateau Marmont and New York’s Mercer Hotel.

A similarly short stroll leads to London’s leafy Regent’s Park, while 10 minutes away you’re in the shopping nirvana that is Oxford Street.

Not that the newly married “Lights” singer has been spending much time at her Oldbury Place pad. According to the London Times, she’s been spending the Covid-19 lockdown with her new hubby, MBA student Caspar Jopling, and Wallace the cat, at their cozy country cottage near Oxford.

Socially distanced country living seems to suit the singer. In the past few days she’s listed a second London mews home she owns, this one a converted hay loft in the Paddington neighborhood.

Both properties are listed with realtor Simon Rosenblatt, of London brokers Aston Chase.

Don’t expect Goulding—she has a new album—Brightest Blue—to use the proceeds of both sales to go more spacious and palatial in her next purchase.

She recently told Vogue: “I’m a bit funny when it comes to houses, because I don’t like big, big houses. I like being enclosed.

“I did actually rent a ginormous rockstar house for a bit, and I hated it. You could hear a pin drop. It was too big, and I didn’t need any of the rooms.”

As for where she’s buying next, she’s keeping that news firmly under lock and key.

Check out more photos of the London mews townhouse below: