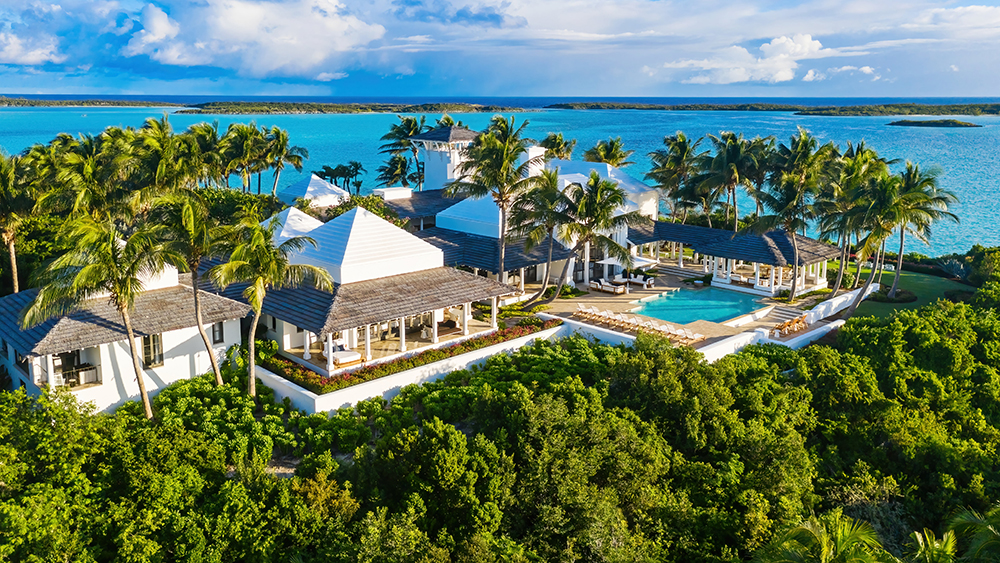 When country music power couple Faith Hill and Tim McGraw went looking for a slice of paradise to chill on in 2003, they found it in the heart of the Exuma island chain in the Bahamas.

At the time, L’île d’Anges—or Angels’s Island— was a 20-acre chunk of uninhabited and undeveloped rock. Nine long years later, they had transformed it into a laid-back, easy-going family escape.

What you’ll see from the sea plane as you fly in.  Photo: Brett Davis/Knight Frank

Now, 17 years after snapping up L’île d’Anges, the two have decided to sell, listing it with international brokers Knight Frank with a $35 million asking. Potential buyers should take flip-flops for viewings.

“It really is heaven on earth,” listing broker Edward de Mallet Morgan tells Robb Report. “Flying in by seaplane, seeing the color of the water and then having your toes in the sand is just the start of the tropical-living lifestyle that L’île d’Anges offers.

“While there are a number of islands in the Bahamas for sale, it’s rare to have one totally turn key. The owners have kept it as their own five-star resort, ready at the drop of a hat for them to arrive.”

The 6,500-square-foot main house sits high in the center of the island, just steps from sandy beaches on either side. Architecturally, it comprises eight separate pavilions, each connected by a series of breezy, open-air tiled walkways.

As Hill told AD:” We wanted to feel connected to the outside. When the breeze comes through the room, it’s just life changing. It really is! It’s something for the soul.”

That means full, side-to-side-opening glass windows in each of the four bedrooms and a massive full-width, glass-paneled, roll-up door in the main living area, with jaw-dropping views across the pool to the sea.

The tucked-away primary suite opens to the elements on two sides and features soaring ceilings with dramatic cross-hatched beams. A huge private patio comes with its own outdoor soaking tub.

One especially cool feature of the home is its overflow accommodations. During the long, difficult build process, two large, yurt-style tents were erected on a beachside teak deck. The couple stayed here during site visits and decided to keep them.

“Kids love them, as do the adults. Water is literally lapping at the front door,” explains Knight Frank’s Morgan. “And they’re pretty serious structures having gone through a couple of hurricanes.”

For outdoor fun, the island features 1.3 miles of ocean frontage—perfect for kayak or snorkeling adventures—while a private dock accommodates a few fishing boats and jetskis. Want to look for pirates of the Caribbean? The home’s Moroccan-style observation bell tower provides 360-degree views.

Because L’île d’Anges has to be totally self-sufficient, the northern end the island is dedicated to generators and water desalination facilities. They’re serviced by a small staff who live on the island full time in three stylish cottages. Fuel and provisions come in by barge.

Of course, if you run out of Dom Perignon on any given visit, you could try calling your neighbor, magician David Copperfield, who owns Musha Cay, a quick speedboat ride away.

As for getting to L’île d’Anges—also known less glamorously as Goat Cay—it’s a 90-minute flight from Miami to Exuma International or a 60-minute seaplane ride from Nassau.

“The beauty of L’île d’Anges is that it’s available today and livable today,” says Morgan. “Many people dream of an island but don’t want to spend the next 10 years developing it.” Take a video tour of the island here.

The primary suite has its own private patio with soaking tub.  Photo: Brett Davis/Knight Frank

It doesn’t get more private than this.  Photo: Brett Davis/Knight Frank

Inside one of the guest yurts.  Photo: Brett Davis/Knight Frank

Another of the estate’s pavilions.  Photo: Brett Davis/Knight Frank