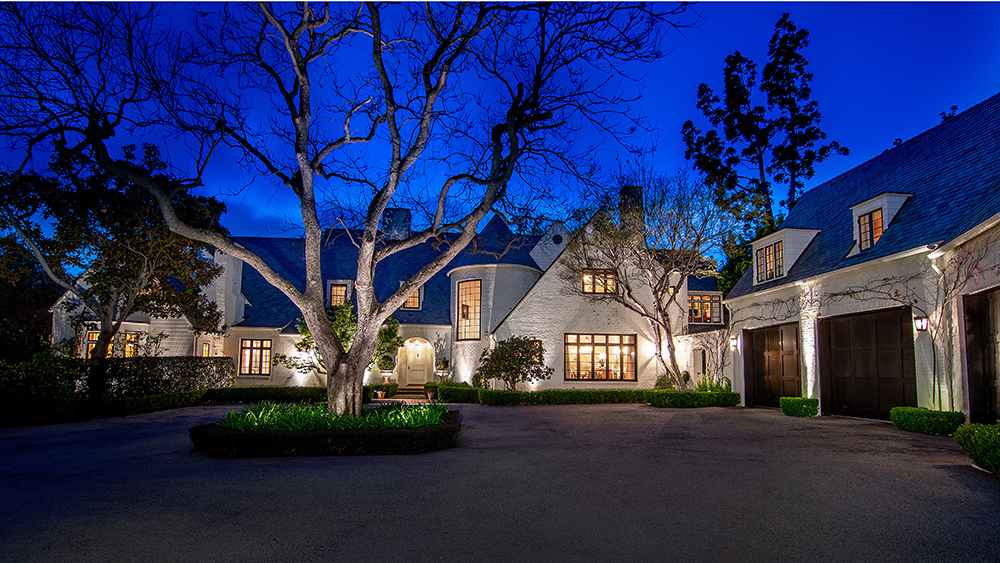 The rumors are true: Former Fleetwood Mac guitarist Lindsey Buckingham and his interior designer wife Kristen are selling their longtime compound in Los Angeles’s ritzy Brentwood area, with dreams of getting $29.5 million for the home.

The Buckinghams originally bought the 1.2-acre, double-lot property in 2004 for $6.6 million and had the French-Normandy-style mansion custom built. Set behind imposing double gates and fronted by a large motor court, the main, white-painted brick house offers around 10,000 square feet of interior space.

The home’s very traditional-looking interior is the work of Kristen Buckingham, who owns interior-design company KB Bespoke, with a showroom in LA’s La Cienega Design Quarter.

The master suite is on this first-floor level, though in its own separate wing. It includes a sitting room, fireplace, bathroom, walk-in closets and dressing room. There are four additional en-suite bedrooms upstairs, plus an office with loft.

The pool and pavillion  Marc Angeles

In the expansive, secluded back yard, there’s a championship tennis court, and a large pool with a pool pavilion and gym. Designed for entertaining, there’s abundant covered and open patio space with a fireplace and built-in barbecues.

The property also features a detached three-car garage with a spacious guest suite above. For wanna-be guitar gods, part of the building includes a spacious recording studio where Lindsey Buckingham, 69, no doubt worked on his recent Solo Anthology: The Best of Lindsay Buckingham album.

The music world was rocked a year ago when Fleetwood Mac split with Buckingham. He and vocalist Stevie Nicks joined the band in 1974; the following year their self-titled Fleetwood Mac album went to Number 1 in the U.S. with hits like “Rhiannon” and “Landslide.” Since then, the band has sold more than 100 million records worldwide.

So why give up this gorgeous compound in the heart of Brentwood? According to listing agent Jeff Hyland, of Hilton & Hyland, the couple has spent the past two years building a new property close by, and it’s now nearing completion.