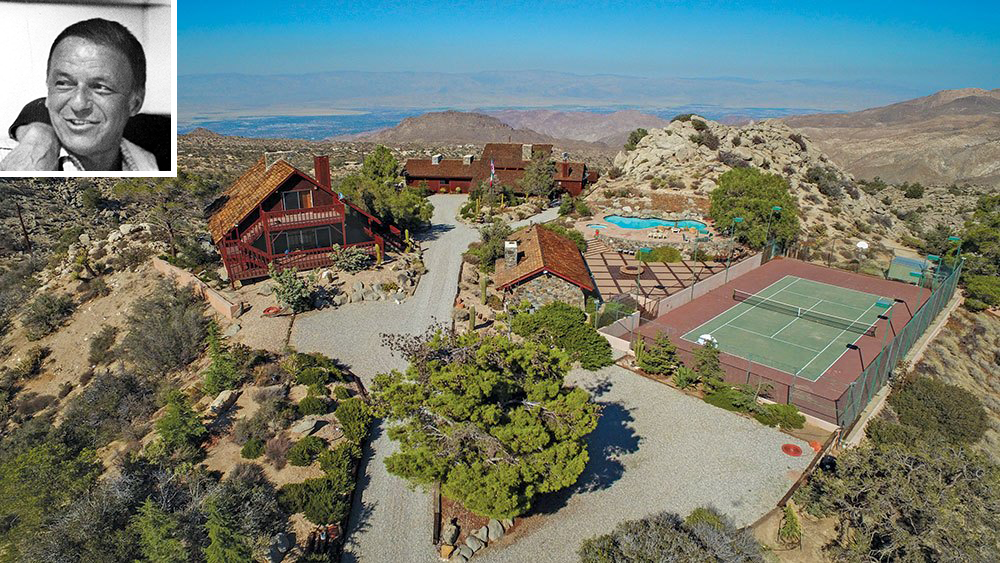 Frank Sinatra may have famously crooned about New York, New York, but the singer spent a fair bit of time in the Golden State as well. He even built a compound in Palm Desert where he lived for many years. The digs are just as enviable today as ever, complete with a helipad and tennis court—yours for $4.25 million.

The property is known as Villa Maggio, after Angelo Maggio, the character that Sinatra played in the 1953 movie From Here to Eternity, for which he won an Oscar. It’s a 7.5-acre parcel altogether and is situated on a mountain high above the rest of the city, though you can still get to all the local shops and restaurants after a 20-minute drive.

The living room of the main residence. Sinatra personally designed the home, which stylistically looks like a mashup of midcentury modern and ski-lodge aesthetics.  Sean Garrison

The interiors themselves have been carefully restored, but much of the original tiles and wallpaper that Sinatra selected remains. There are three residences on the grounds, which are great for having family over for an extended stay. The main home has five bedrooms, the guest house has three and the pool house has just one; you’re looking at nearly 6,500 square feet of space in total.

Sinatra used the home as a sort of respite, since it’s so far above the city’s main thoroughfare, but it was also a place where he hosted many friends for parties. Both a pool and a tennis court are on the property, and the pool house lends itself well to outdoor entertaining, as it has both a built-in firepit and plenty of space for lounging or dining alfresco. The helipad, meanwhile, makes it easy for both the future buyer and their guests to drop in whenever they want.

It’s a chunk of land that could very well grow in size, too, should the next owner feel so inclined. According to the listing, the adjacent property is also for sale. Of course, there’s plenty to enjoy here as is, so, in the words of Ol’ Blue Eyes himself, you can “come fly with me” straight to the estate . . . if you’ve got a helicopter, that is.

One of the bedrooms  Sean Garrison

The compound sits atop a mountain and enjoys spectacular views.  Sean Garrison